How did I survive summer without Salmorejo Cordobés? 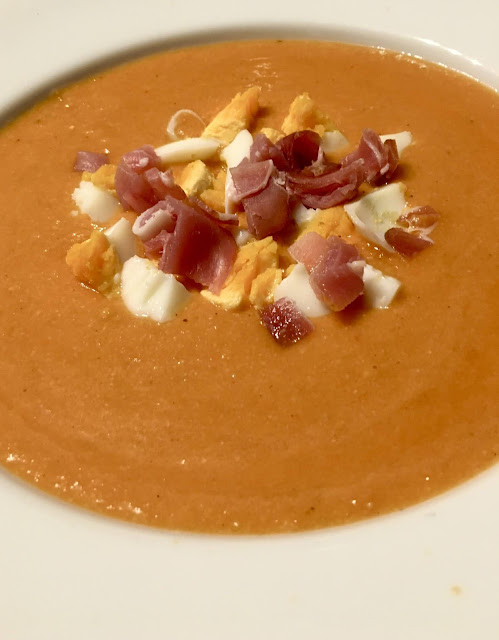 When the the brutal heatwave oppressively descends on Seville, and when the going gets too darn hot, the Andalucians look to salmorejo to cool down. In summer everyone in Spain  starts eating cold tomato soup. Salmorejo is something you’ll find on menus throughout Spain, but the best Salmorejo is always found in the south. On a hot day, there is nothing more refreshing and satisfying than a bowl of cold Salmorejo.If you were to sum Salmorejo up as a dense gazpacho, an Andalusian would scoff at your gross generalization. Salmorejo could almost be classified as  a religion. But, technically speaking, it’s a cold, spoonable emulsion of tomato, bread, garlic, and olive oil. Salmorejo finds its ancient roots 90 miles northeast of Seville in Córdoba. Occupants of this area have been making a version of the dish since they started cultivating wheat. The base, gachas* (old bread mashed with other ingredients), has been found in archaeological sites throughout wheat-growing areas in the Western world dating
back to 2000 B.C. Like the bulk of Andalusian cuisine, salmorejo was, and is, accessible and inexpensive. Though commonly associated with farmers in the rural south, its tradition stretched across economic classes and into urban areas. Women would use enormous mortar and pestles to mash bread, garlic, and olive oil into a paste that they’d keep in a designated cool area of their homes until it was time to eat. The tomato was incorporated sometime in the 18th century, and eventually the blender turned salmorejo into an undemanding emulsion and summertime salvation. Salmorejo reveals much about Andalusia—its intense climate, agricultural economy, and resourceful citizens. It reveals their ability to adapt to their means. It’s the capacity to use so few resources to make a
nutritious and flavoursome dish and turn it into a popular part of their gastronomy. These days salmorejo continues to alleviate hunger and fight off heat, just as it has for centuries. It shows up on practically every menu from Córdoba to Seville (even as a sauce), with classic versions at cheap tapas bars and creative riffs at fine dining establishments. Throughout history the women learned from their mother-in-law, who learned from her mother, who muscled it by hand, then passed the recipe on to
the next generation of soup making madres. The first time I wrote about salmorejo, my favourite summertime Spanish food, was one of my very early blogs back in august 2011.I took my inspiration from Elisabeth Luards book "The food of Spain and Portugal". Having made it for the first time on my own, I was proud it had turned out almost exactly like the bowls I had partaken of in various parts of Andalucia.I proceeded to put my own spins on it, the first with giving it kick of Indian flavours, followed by a beetroot version and many more including its algarve cousin, arjamolho (sounds like salmorejo). 10 years on I find myself with many versions of Gazpacho and other rustic summer soups from Córdoba to Cadiz under my belt. I have tasted many many spins on Salmorejos, including my friend Fabio´s latest take on it, tiradito atun trufado, made with sweetcorn and garnished with muxama, sturgeon caviar and truffle,I decided to go back to its roots and make truly authentic one, even though other versions may have proved to be even more delicious. With just four ingredients plus multiple choices for garnish, the quality of the tomatoes is of supreme importance as is the absence of vinegar. What the "Córdobésas" as they are known, like most is a good plate of "Salmorejo Córdobés" - known almost everywhere in the world nowadays - but without vinegar, because the real recipe of Salmorejo Córdobés does not contain vinegar. However, obviously everyone can add as much of the ingredients as they want (I particularly like it with a lot of garlic so much so that it's mildly spicy).
The authentic recipe for Salmorejo Córdobés is as follows:

- 1 kg of tomatoes.
- 200 grams of bread (typical Cordoban "telera" bread)
- 100 grams of Extra Virgin Olive Oil.
- 1 clove of garlic.
- 10 grams of salt.
My adapted version of the traditional Córdobés original goes like this:
Roughly cut 2 lb (1 kg) ripe tomatoes (stems removed) in the palm of your hands—be careful!—over a blender. Add 2 cloves garlic, a couple pinches of salt, and blend until smooth.
Tear 7 oz (200g) bro de milho (corn bread; some crispy crust is fine) into thumb-size pieces into a bowl. Sprinkle some water over the bread and use your hands to get the bread nice and damp. The staler the bread, the more water and time you’ll need for it to soak in.
Blend the bread with the tomato until smooth. Depending on your tomatoes, bread, and preferences, you may need more water. You’re going for the texture of a smoothie.
While the blender is running, drizzle in ⅔ cup extra-virgin olive oil and blend until the mixture turns from pale red to orange. Taste for salt and chill in the fridge.
*Gachas is an ancestral basic dish from central and southern Spain. Its main ingredients are flour, water, olive oil, garlic, paprika and salt.Gachas is considered an unrefined rural dish, the food of shepherds, farmers and itinerant labourers.
Email Post