The sheer cheek of them 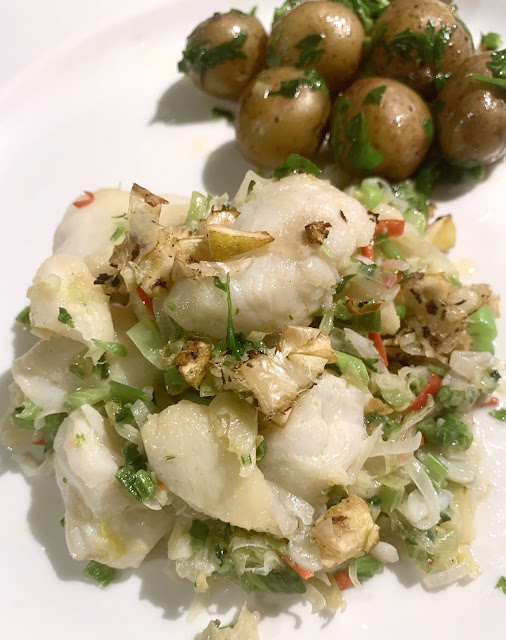 For those of you who follow this blog on a regular basis you’ll know how fanatical I am about forgotten cuts of meat, using every single part of an animal and leaving nothing to waste. When it comes to types of fish cuts, my approach in the kitchen is very much the same. Why is it that the fillet reigns supreme. I suppose because of the plethora of recipes for it and the fact it’s easy to source in the fish market.
Only too often you’ll see simply the fillet or loin of fish being used and the rest discarded. That’s just an incredible waste of not only food, but also flavour.
They seem to be the only cuts of fish that the general public seems interested in eating? While the whole fish may not exactly be a cut, it’s still quite a common way to cook a fish, and as much as I enjoy a good steak, I get far more pleasure in both cooking and eating other, much less popular cuts. They take a little more work but, if you enjoy cooking, thats all part of the fun. Though it might not sound appealing to some, cheeks of a fish can also be a lovely ingredient to work with. Cod cheeks for example are slightly firmer than fillets, so perfect in a stir-fry. The texture of the cheeks if cooked in the right way, is similar to the loin or fillet, and they’re full of flesh. Even better, they are extremely cheap to buy from your fishmonger. Monkfish cheeks are, in fact, widely regarded as a delicacy, so don’t dismiss them. As for recipes, the best are the simplest. You can treat cod cheeks pretty much the same as any other when you’re cooking them. You will need about 300g cod cheeks for two, 5 or 6 each depending on their size.
This dish is a simple stir-fry of cod cheeks, spring onions, garlic and chilli with lime. Cooking from the whole fish is a good way to help keep food costs down and reduce waste, while also introducing some tasty but lesser known dishes into your diet. Plus, eating cod cheeks shows true dedication to head-to-toe cooking.

Finely zest and juice half the lime.Add the olive oil to a hot pan, then saute the cod cheeks with the chilli, garlic and spring onion. Season with salt and pepper.
Once the fish is cooked (about four minutes), remove from the heat and add the lime juice and zest.
Finely chop the remaining half of lime and cook gently in a separate pan to release the fruit sugars, until caramelised. Transfer the fish to a plate, garnish with the caramelised lime and serve with rice, potatoes or crusty bread.
Email Post