Gunciale, fat of the land, the stuff dreams are made from.

I remember back in the day when the next biggest thing was lardo. The hottest ticket in my
pocket wallet of ingredients now is Gunciale. This is cured pork jowl ( guancia meaning cheek or jowl ) and  is beloved by Romans, and by god for one with a latin state of mind has it changed the way I cook. It has a sweet, delicate taste that is halfway between best bacon and proper well-rendered lard. It is an exceptional ingredient that imparts its distinct sweet flavour and rich fatty nature to whatever it is added to, whether that be a soup, stew, risotto or pasta .Imagine its January when there’s much talk of resolution, of greens and juices and proving worthiness. Quite right too. And then there are the Italians (and converted Italians) who – almost without exception – would be talking about lardo,  guanciale, pancetta and salumi. In short, cured pork products trimmed with silky, milky-white fat.
Take aspaparagus for example, which is never better than when glistening in a fine layer of fat – be it melted butter, Hollandaise sauce or dipped into a lightly boiled egg. I suggest wrapping it in gunciale, which softens under the heat, basting the spears as it melts. If this gently aromatic product evades you, pancetta cut in very fine slices will work too. 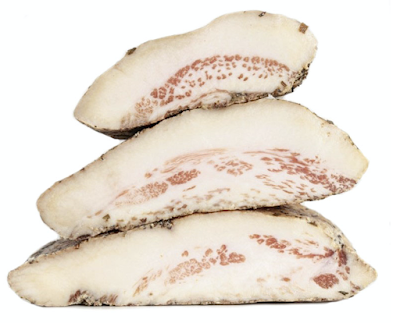 Please abandon any preconceptions you might have, this is good fat, pork fat nirvana, the antithesis of insidious hidden fat. This is fat to be used sparingly with relish and to be celebrated. But lets go back to the very beginning, a very good place to start, with its close partner Lardo. Not to be confused with English lard, this is pork back fat cured in a solid white marble trough with salt, black pepper, aromatic herbs and garlic. I’d like to be cured in solid white marble trough. I have to admit being a little bewildered when I first saw it on a plate, less so when I tasted the rich, silken, aromatic lardo melting, yielding really, into soft, warm  glorious stuff, this is food that lingers in mouth and memory. Time has not faded anything, I now feel the same when I eat its counterpart gunciale on crostini or toasted bread, with Marcella Hazan´s tomato sauce and a sprinkling of parmesan (above). You could add a few black olives, some radishes and a glass of prosecco and have what I would call a perfect antipasto.Pre dinner drinks will never be the same again.This is the stuff that evokes dreams of Roman, Florentine, Umbrian or Etruscan holidays.Poke your head down any side street in italy and hear the clinking glasses and lively banter of people sharing small plates of food and discussing the events of the day outside a traditional neighbourhood wine bar or enoteca. And what comes after the antipasto, il primo, so lets talk more about how  guanciale plays an important role in that.I use aged guanciale sparingly, a little goes a long way. I adore the deep, rich, fatty, reassuring notes it imparts to whatever it touches.It is a portrayal of goodness, the perfect cut of cured pork. Many Romans consider it fundamental to authentic All’amatriciana, Carbonara or to this recipe, another Roman classic  Pasta or Spaghetti alla gricia.
Pasta alla Gricia is a Roman recipe of very ancient origins. In fact, according to food historians, this recipe was invented around 400 AD and was a typical dish served in the taverns of Ancient Rome. It’s
also often referred to as white Amatriciana! When in Rome, the four pasta dishes that you are most likely to find in any trattoria or osteria (tavern)
are Carbonara, Cacio e Pepe, Amatriciana and alla Gricia. Interestingly, the first 3 have become very well-known and popular in other countries too. The last recipe, pasta alla Gricia, has somehow
escaped the culinary limelight, so I decided to try it. This is surprising given it’s actually the oldest of these Roman pasta recipes and considered to be the original recipe from which the other 3 recipes developed. Think of it as a flexible equation. Add some eggs to this dish and you have a carbonara. Add tomatoes and you have amatriciana. Take away the guanciale and it becomes cacio e pepe! 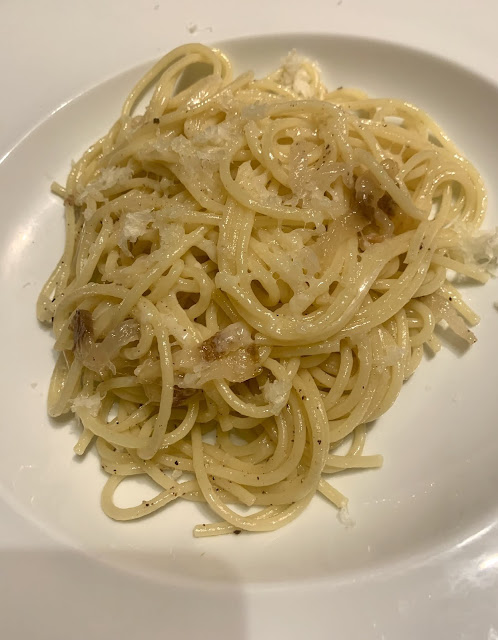 Pasta, guanciale, cooking water, pecorino romano and black pepper: Alla gricia. This much I know. Al dente spaghetti is tossed with gently sautéed guanciale: the aim is to slowly soften the guanciale, keeping it translucent never brown and crisp which would negate the pleasure of biting into soft, fatty, sweetly flavoured curls. Drained pasta is added to the guanciale along with a little of the pasta cooking water, this starchy water is a key to the dish, emulsifying the fat to create an almost creamy sauce for the pasta. The dish is finished with a fearless amount of bold, brazen, tangy and freshly grated pecorino romano and plenty of cracked black pepper. More pecorino scattered liberally from above is definitely recommended. Eat.
Simple to make but – as is so often the case – practice is prudent. Practice until you can sauté the guanciale until it is perfectly soft, pink and succulent, perfectly judge the splash of pasta cooking water, understand exactly the right amount of vigorous pan shaking of spoon and wrist partaking required to bring the ingredients together. It goes without saying the ingredients should be authentic and the very best you can lay your hands on. If you can’t find guanciale and pecorino (I know I know fat chance) pancetta, parmesan and the same principles will make an extremely tasty dish, not gricia, but an extremely tasty dish none the less.
Serves 4

Cook the pasta in plenty of well salted boiling water. Meanwhile place the guanciale in a cold sauté pan with the lard or olive oil and place over medium heat. Slowly sauté the guanciale. When the guanciale is soft, pink and translucent and rendered it’s fat, add a small splash of water from the cooking pasta.
When the pasta is al dente, set aside a cup of pasta cooking water. Drain the pasta and add it to the pan, thenturn up the heat and listen for some sizzle. Toss the pasta vigorously, coating it with the guanciale and rendered fat. Remove the pan from the heat and add three quarters of the the grated pecorino romano cheese and the black pepper, toss vigorously, and add another splash of the reserved pasta cooking water if necessary to bring the ingredients together into a soft creamy muddle. Divide between four warm bowls, scatter over the rest of the pecorino and serve immediately.

THE VERDICT: I loved the simplicity of taste. .Just 5 ingredients made each identifiable, however what it gave in its austerity it lacked in richness and I have to say without the egg that makes a carbonara what it is, there was definitely a feeling that something was missing, that is not to say that i will not make it again.