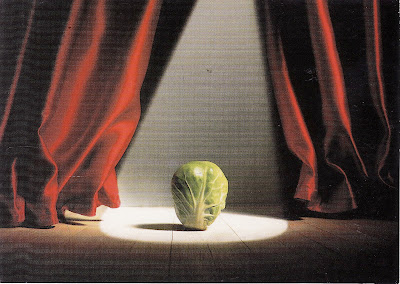 Couve-de-bruxelas. you either love them or you hate them. They have become a bit of an understudy these days,waiting in the wings while the other vegetables hog the spotlight but like it or not, this jaded family favourite is here to stay. A sprout is for life not just for Christmas. So whatcha gonna do ´bout it? Re-cast them alongside some upbeat flavours and ingredients, and they´ll take centre stage again. You can steam them, boil them,poach them, roast them or saute them. You can serve them whole, sliced,shredded or even raw. You can add so many things to them to make them interesting and each time you can try something new. You really can't go wrong.Pretty fab sprouts.
Here are my hot tips for Oscar winning Brussels.

Boil the sprouts in salted water for 10 minutes.(they should retain a little bite) Warm the chestnuts in a pan of hot stock or water.Drain. Melt the butter in a large pan, then toss through the sprouts and chestnuts until they are well coated. Season, then stir through the breadcrumbs and serve.

salt and pepper to taste

2 tablespoons pecans (chopped)
1. Cook the bacon in a pan and set aside reserving 1 tablespoon of the bacon fat.
2. Add the shallots to the pan and cook in the bacon grease and saute until, tender about 3-5 minutes.
2. Add the brussels sprouts to the pan, season with salt and pepper, toss in the fat and saute for a minute.
3. Remove from heat and mix in the cranberries and pecans.


juice and zest of 1 orange


Melt the butter in a heavy bottomed pan over a medium heat. Add the garlic and ginger,and fry gently for 3-4 minutes until pale golden. add the brussels sprouts and cook for 1 minute, stirring to coat them in the melted butter. Add the orange juice, its zest and the red wine vinegar. Season with salt and freshly ground black pepper. Cover and cook over a medium heat for 5 minutes until the sprouts are soft. Remove the sprouts, then reduce the sauce for about 3 minutes, or until syrupy. Pour the sauce over the sprouts and serve.

Perfect casting, my favourite for an oscar nomination