Of my own accord 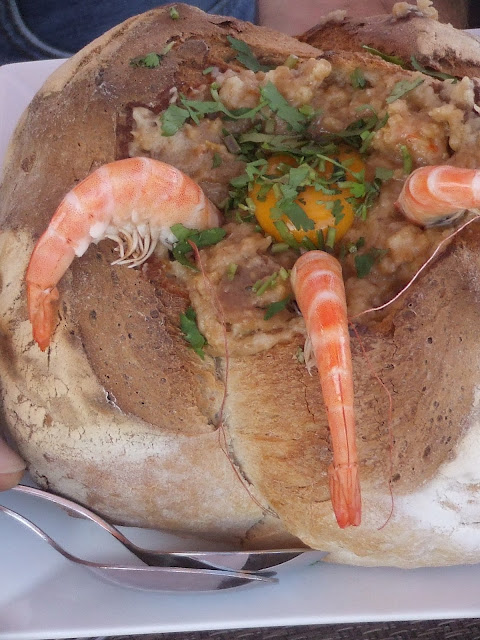 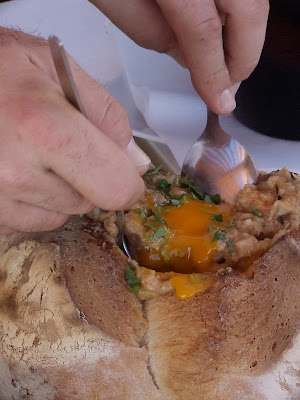 "Broth without bread only in hell" 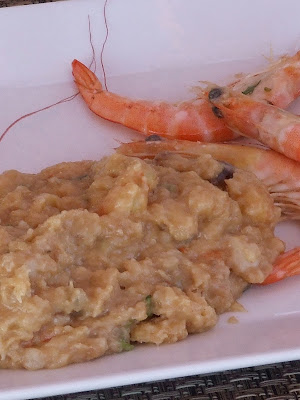 Backtracking to enjoying some late summer sun in November, we tootled off for a spot of lunch at one of our favourite restaurants Pezinhos n´Areia. Pezinhos at Praia Verde is one of the few local restaurants that upholds culinary heritage and serves some very traditional and unusual Algarvian dishes.The Algarve has a forgotten culinary archive that chefs and restaurants  have overlooked, in favour of more touristic food like "Chicken Piri Piri". Now is the time to tap into this legacy and reinstate some culinary classics.Jornal do Algarve ran an article headed "Turismo culinario pode render milhoes."  Basically those involved in the food industry and tourism need to delve deep and re-invent their menus to attract a wider clientele. At Pezinhos, however,there is a lovely personal touch and attention to detail. As you can see from the pictures which we took on location, Fernando the waiter brings the dish to the table with the raw egg sitting on top and then proceeds to stir it into the hot soup with two spoons.I have saved this post until now as this recipe is not one for the faint hearted,for hot weather, or for anyone who has been told to cut back on their bread intake. It is a dish for a real trencherman.Do not even think of adding anything else to the meal when selecting this as a main dish.Winter is the prime time to enjoy this dish.
Feeling sorry for myself, trying to nurse a cold, and in need of comfort food, finally I took the opportunity to fulfil a promise to myself to sample this typical Algarvian Speciality- Açorda à Algarvia. I had on many occasions tried and loved the Italian  pappa al pomodoro,Tuscan bread soup, made with basil and tomatoes.Now was the time to tuck into a wonderful Portuguese bread -pap called Açorda which comes in many guises. Açordas, generally consist of bread boiled with other ingredients, forming a lumpy porridge( don´t be put off by my description,because even though it does not look "glamorous darling" it is extremely attractive to the palate).Portugal has an extremely high bread consumption. It is an accompaniment to everything - starters, soups, savoury dishes, and also eaten with fruit. Because of this, it gets to be left over in more than sufficient quantities to justify cooking it.The secret to an açorda is in the quality of the bread.Peasant bread has sadly become the so-called peasant loaf - a cross between white and wholewheat.It is  much more solid and close textured ( dare I use the word  worthy) than just plain ordinary white.The flour is an unbleached stoneground white flour. Any bread can be used for açorda, but the result may not match the Portuguese original.Excessively white, lifeless cotton wool type breads  should be avoided if you want to avoid a bland pap.To get the WOW FACTOR with an açorda for starters you need a round loaf, ideally Broa de Milho (maize bread).This is typical peasant bread at its best.Pao de milho is available in every town supermarket in Portugal. In the UK or U.S you will probably have to look to a more specialist outlet. The reason for using this bread is its its ability to crumble, so therefore great stuff for thickening soups.It keeps well.If kept in a plastic bag in a bread bin it will still be good in a week, It can be frozen.
Try this one, it´s yummy!
This is how it's done:
SERVES 2
Preparation:
Cook the cockles, the clams, and the shrimp. keep the water you boiled them in. Shred the onion and garlic. Put a pan over a moderate flame with olive oil, add the onion and the garlic, and let it braise. When it starts getting a golden color, put in some of the water you used to boil the seafood, and let it boil up.
Add the bread torn into pieces, and mix it up until you get a homogeneous dough. Add the seafood, the minced coriander, and adjust the seasoning.Hollow out your loaf and fill it with the porridge. Crack  the eggs into the hot breadsoup, stirring vigorously and let them cook.For maximum impact this last stage should be done at the table as I described above. Before you serve, sprinkle with a little more coriander.

Variation
Prawn açorda is a richer version of seafood açorda, using only prawns. In some restaurants they will bulk it up with some firm fleshed white fish. The liquid should be fish stock or, much better still, the strained liquor left after cooking the prawns. The objective is to have a marked seafood taste in these açordas.
Email Post