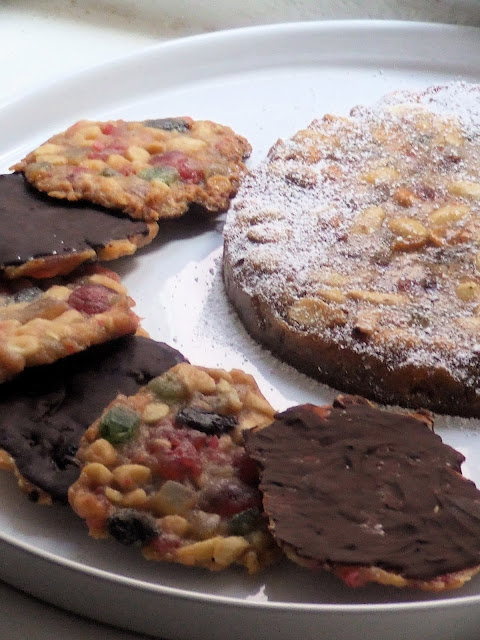 Sugar and spice and all things nice, its never too late to bake a Christmas cake...It has been raining for two days and this has given me some time to do some christmas baking.While cracking eggs, chopping nuts and candied fruits my thoughts turned to the origins of all these delicious cakes and cookies.How come I was cooking all these foreign delicacies in The Algarve.I started to look for a justification. The original Panforte is undisputably Sienese, but its close friend the Florentine could apparently be Austrian or even French.I dont know which panforte I was making,white, black, Margherita or Panpepato(the old name meaning "peppered bread") I was sort of making it up as I went along., but I did use white pepper among my spices? Panforte or Panforte de Sienna is the most usual name meaning “Strong Bread”.The history of panforte is murky, though everyone seems to agree that it is an old recipe, dating back to the Middle Ages. It is said that panforte was carried by soldiers on the crusades.Following my heart, ( O cozinheiro Coeur de Lion ), I reminded myself of the crusades. a subject I have recently been reading about in the late Martin Page´s fascinating book The first Global village. 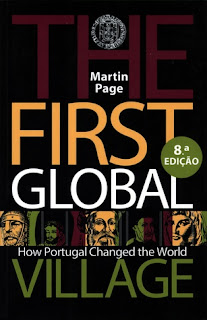 Panforte was apparently the crusades siege food, ingredients included honey from Spain and oriental spices, proof of the crusaders trade routes and spice trails across the world.Panpepato is an ancient confection rich with history. Born from the wise hands of apothecaries within monasteries and convents,similar to the monasterial and conventual tradition in Portugal and Spain. It became a delicacy sought after by young damsels and valiant knights.It is not a bread,it is a not overly sweet, very spiced, tender and flat. Is it a cake? is it a pie?- No its the older cousin of the power bar, me thinks.At the time of the Medici it was said, in fact, that the “peppered bread” gave strength and vigor in encounters of arms and love, so there you have it.Next into the oven went Florentines. Chewy chocolate biscuits with a difference, the festive fruits and spices make these a great standby for when friends drop in over Christmas.So why Florentine biscuits?  Some say the biscuits are actually Austrian in origin. Another story has it that a master confectioner created them at Versailles, in the kitchens of King Louis XIV of France, in honour of the Medicis of Florence when they visited.God rest those merry gentlemen,the Florentines were coming.
Florentines

8oz butter
8oz sugar
8oz plain flour
8 teaspoons honey
6 oz dried mixed fruit,6 oz glace cherries
6oz chopped almonds
200g melted chocolate
Pre-heat oven to 180C / 350F/ gas 4
Melt the butter, sugar and honey in a heavy pan.
Remove from the heat and add the flour, fruit, cherries and almonds. Mix until smooth.
Place "dollops" of the mixture on a non-stick baking tray ( 12 to a tray )and press down lightly with your finger. Bake for 8-10 minutes until golden around the edges. The edges may need pulling in during cooking if they are spreading too much on the tray. Leave for 5 minutes then remove carefully to wire racks to cool.When cold spread melted chocolate thinly on the flat side and leave to set.

Pearl of Christmas wisdom:
Cut the florentines into quarters or eighths for artesan petits fours

How I interpreted Panforte

175g / 6 oz / 1 cup Hazelnuts
75g / 3oz / 1/2 cup whole blanched almonds
225g / 8oz /1.5 cups mixed candied fruits and peel and diced
1 tablespoon mixed ground spices
(coriander, cloves, nutmeg, ginger)
3 good pinches ground white pepper
75g / 3oz / 1/2 cup plain flour
6 tablespoons honey
100g / generous cup caster sugar
icing sugar for dusting
1.Pre-heat oven to 180C / 350F/ gas 4. Grease a shallow 20cm round cake tin with butter and line the bottom with non-stick baking parchment.
2.Spread the hazelnuts on a baking tray and place in the oven for about 10 minutes until lightly toasted. Remove and set aside.When cool rub the hazelnuts with with a clean tea towel to get the skin off. Coarsely chop all the nuts.
Lower the oven temperature to 150F /300F gas mark 2.
3.In a large mixing bowl, combine the candied fruits and peel, spices, pepper and flour.
toss together well with a wooden spoon.
4.In a small heavy based pan, stir together the honey and sugar, and bring to the boil.Cook the mixture until it reaches 138C / 280F on a sugar thermometer or when a small ball forms when pressed between the fingertips in iced water. Take care when doing this.
Use a teaspoon to remove a little mixture from the pan for testing.
5.Immediately pour the sugar syrup onto the dry ingredients and stir well until evenly coated.Pour the mixture into the prepared tin.Dip a spoon or spatula into water  and use the back of it to press the mixture flat in the tin.
6.Cut four sheets of newspaper into 25cm / 10in. squares. place the newspaper pad on a baking sheet. This acts as insulation to prevent the base of the Panforte from burning.
Place the cake on the middle of the newspaper and bake for 30-40 minutes.
The cake wont colour or seem very firm after baking. Trust me it will harden as it cools, so don´t be tempted to put it back in the oven.Cool completely in the tin until firm. Remove gently from the tin and remove the baking paper. Store in asealed container for at least a day before eating.Dust with icing sugar before serving.
Email Post
Labels: christmas