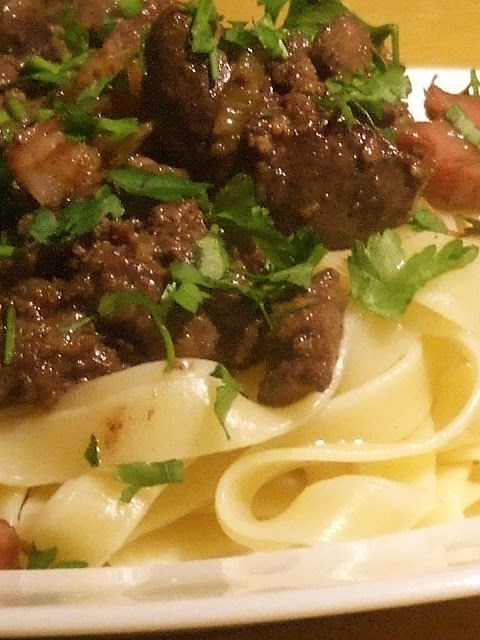 Chicken liver is usually considered the poor cousin. It is a simple food, which with a little care can whet the appetite of even a king. In the days when battery farmed chicken was unheard of, this dish would have been considered a delicacy. Lets turn back time and try to rekindle that spirit.
Chicken Livers with Madeira( figados de frango com Vinho Madeira)
Serves 4
500g (1lb) pappardelle or tagliatelle
500g (1lb) well cleaned chicken livers
100g (3.5oz) toucinho or pancetta
1 small onion, chopped
50g ( 2oz ) butter
salt and freshly ground black pepper
A small glass of medium dry Madeira
1tablespoonj finely chopped parsley
Cut each chicken liver into two, the bacon into fine sticks, and slice the onion. Heat the butter in apan and fry the onion until golden, then add the bacon and continue frying for a minute or two. Add the chicken livers, season with salt and pepper and fry over a low flame, turning the livers over until they are cooked on all sides. Pour over the Madeira and let it bubble, then reduce for a few minutes. Drain the pasta and serve up with the chicken livers on top.Sprinkle over the chopped parsley.
Email Post