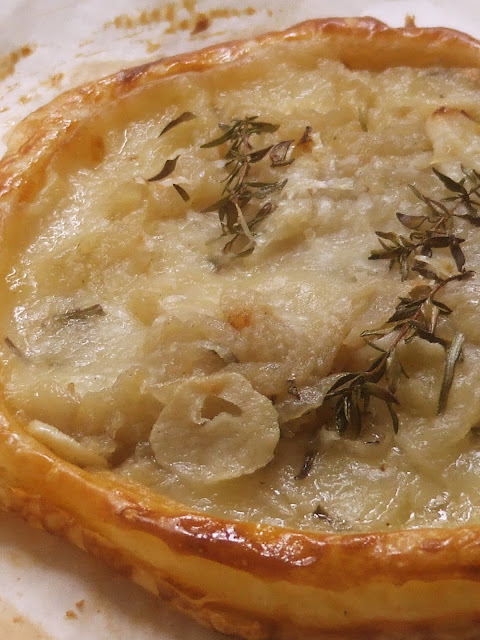 Certain combinations of ingredients are just made for one another.For me
cheese and onion is one of them.Their pairing is something intrinsically correct.A marriage that sets off on the right foot and is there for the long haul.These two, between them, bring flavours and textures to a partnership that defies meddling.Egg and chips, steak and frites,peas and mint,sausage and mash,strawberries and cream.These are all matches that can not be divorced from each other, a bit on the side along the way perhaps, but like the good old cheese and onion you are guaranteed a more than happy meal in their company. I have recently experienced a kind of gastronomic deja vu. When we had a museum cafe in London back in 1998 our menu used to feature a "taleggio and onion tart."We had an extremely handsome Portuguese waiter then working for us.Our dear Joao had customer skills all of his own making.One day this scenario took place between waiter and single lady who lunched.

This dish also became a favourite midweek supper of the Thespian and myself.Until yesterday I had not cooked it for six years.The reason being the unavailability of this cheese in the Algarve.I miss having those Italian delis within easy reach,where you could buy this cheese, and then rush home with your prize and rustle up a simple but oh so tasty tart within the hour.However, having put my thinking cap on, I have found  an almost perfect match here in Portugal-DOP cheese from Serra de Estrela or Serra (Beiras)
Made in the mountains of the beautiful Serra da Estrela (“Star Mountains"and also a national park), this traditional washed rind and  smear-ripened Portuguese cheese is almost indentical in character and taste to its Italian counterpart The cheese has a strong aroma, but its flavour is comparatively mild with an unusual fruity tang. Its crust is thin.
As per tradition of both countries the Portuguese cheese is also set to mature on wooden shelves in chambers,and sometimes in caves It is described as the "king of Portuguese cheeses".
The Bordaleira ewes thrive on a diet of wild herbs, scrub, gorse blossoms and brambles, producing thick, luscious, aromatic milk. Serra da Estrela is handmade in small batches using wild thistle (Cardoon) (Cynara cardunculus) to coagulate the milk. The curds are broken by hand instead of cut. It takes an average of three hours to make one cheese and only two or three are made per day. After the wheel is salted it is then wrapped in cloth and aged.It is available in two stages of ripeness that correspond to two kinds of texture: "Amanteigado" (like butter) - this is when Queijo Serra da Estrela is younger, the rind is sticky and pungent and the interior is so creamy that it is almost spoonable; "Curado" (cured) - as it ages, the rind becomes harder and smoother with the interior becoming denser and sliceable. Either way, this is an incredible Portuguese treasure

Preheat the oven to 220C/425F/gas mark 7
Peel and slice the onions. In a heavy-based pan cook them very slowly in the butter and olive oil over a very low heat.After about half an hour they should be soft and translucent.Do not let them brown.Roll out the pastry to 40 x 25cm.Cut three 14cm rounds.A saucer will be a perfect template.Within each circle score a smaller one,about2cms in from the edge.Be careful not to cut all the way through.Lay them on a baking tray.
Season the cooked onion with salt,peppr and the thyme, then divide the the mixture between the inner circles of the pastry.Take care not to spill any over the edges.Thinly slice the cheese and tuck it into the onions.Brush the pastry with the beaten egg and scatter over the grated parmesan.Bake in the oven for 15 minutes or until the pastry is golden and the cheese has started to melt.Serve immediately.
Email Post