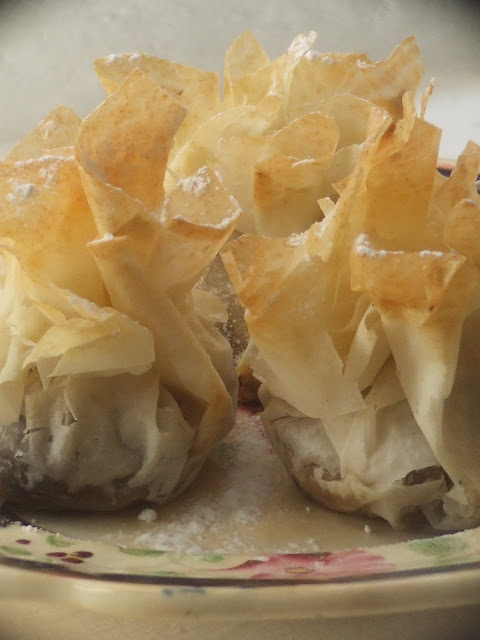 Since stir up Sunday one month ago I have been living in anticipation of how my experiment with mincemeat and "leaf lard" would turn out.Well, I am happy to announce it as a success, and here to prove it are some luxurious ‘moneybag’ pastries filled with a bounty of quincemeat in filo pastry. This is my  slightly different take on the traditional English Christmas treat.
It was thought lucky to eat one mince pie on each of the twelve days of Christmas (ending with Epiphany, the 6th of January). Alternatively, to refuse one would lead to bad luck. 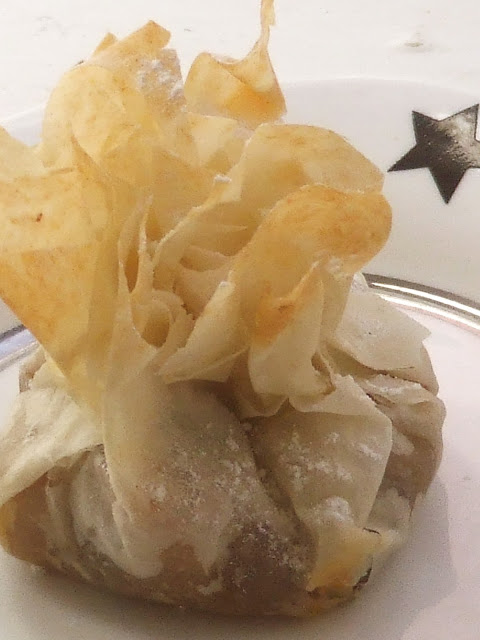 Mincemeat purses
Serves: 6
6 sheets filo pastry, 30 x 50 cm (12 x 20 in) each, about 180 g (6¼ oz) in total
45 g (1½ oz) unsalted butter, melted
1 tbsp icing sugar, sifted
Mincemeat filling
Lay the sheets of filo out, stacking them on top of each other. Cut the stack into six 15 cm (6 in) squares, trimming off the excess pastry. You will have 36 squares. Brush each square very lightly with melted butter and layer them, with the corners offset, to make 12 stacks of 3 squares each.
Place about 1 tbsp of the fruit mixture on each stack, then gather up the edges and pinch together at the top to enclose the filling.
Place the pastries on a non-stick baking sheet and brush lightly with the remaining butter. Bake for 12–15 minutes or until golden brown. Serve warm, dusted with icing sugar.

When making the pies the mincemeat mixture should only be stirred in a clockwise direction. To stir it anticlockwise is to bring bad luck for the coming year.
A wish should be made whilst eating one's first mince pie of the festive season, and mince pies should always be eaten in silence.
It is considered very unlucky to cut a mince pie with a knife.

"Mince pies," "mincers" or "minces" are cockney rhyming slang for "eyes."
*
Many mince pies have a star on them to symbolise the star that led the Magi to the baby Jesus.