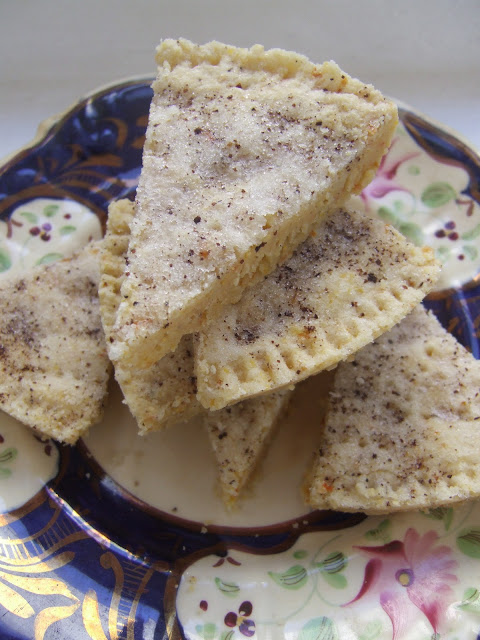 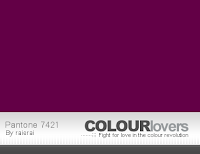 It claims to be the "greatest British biscuit", but its even greater with a tarter than tart and tangy dust, matched to Pantone 7421.

Its a cold damp,windy and grey Sunday afternoon here in the east Algarve, and not only do I crave cake but I am also in the mood for an experiment.I have recently been chastised by my critics for not following the way of Claudia Roden.When I want Middle Eastern or Mediterranean I normally thumb through more regionally specific tomes such as "Moro." Theodore Kyriakou "The Real Greek" or Janet Mendel, but to appease potential enemies here I go, a- thumbin through La Roden´s "Middle Eastern Food" for inspiration.Twice in a day too,because for dinner tonight I am making a fruity Moroccan tagine from the same author.I hope I am forgiven,you know who? My dear mother would be spinning in her grave if she knew I was meddling around with sumac in her shortbread recipe,but what the heck.
With its tangy, sweet sourness and ruby colour, sumac offers a culinary experience which never disappoints.
Essential in the cooking of Iran, Turkey and, most of all, Lebanon, sumac begins life as a berry, the fruit of a shrub that grows in dry, rocky places. The berries are dried and crushed to a deep, wine-red powder. With its fresh, sour-but-fruity flavour, sumac plays a similar role to lemon juice, but has the advantage of not being a liquid. Hence it's ideal for adding zest to, say, a stuffing, where too much liquid would be disastrous. It can be employed as a seasoning, or as a bright finishing touch( my favourite mode-emploi). Recipes suggest "sprinkling it on grilled fish or chicken", "try it on herby, grainy salads or couscous" but nobody says sprinkle it on cakes or as I have done on shortbread. It's relatively mild, too, so you can afford to be generous with it - add by the tablespoon rather than by the pinch. The trick is to use it towards the end of cooking, as long exposure to heat will dull its flavour. 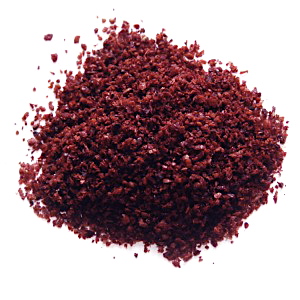 Something else to try is za'atar, an aromatic Middle Eastern spice mix. There are countless different recipes for it, but sumac appears in most of them: just mix two tablespoons of toasted sesame seeds with a tablespoon each of sumac and dried thyme. This can be rubbed into meat, especially lamb before grilling, but is most often used as a dry dip: dunk pieces of bread first into olive oil, then into the za'atar - it's incredibly moreish.
Sumac keeps pretty well (you can use it a good year after buying it, especially if you store it in the fridge), but it's at its fragrant, zesty best when new.

Topping 1 tablespoon powdered sumac and sprinkling of caster sugar
Sift the flour into a bowl.Rub the grated oarange zest into the sugar with your fingers. Stir in the Semolina,followed by the zested sugar.Add the butter.cut it in with a knife and then rub in with your fingertips.Draw the mixture together to form a crumble mixture.Transfer to an ungreased 17.5cm (7inch) diameter tin.Press out smoothly until the tin is covered with an even layer of the mixture.Spread the surface evenly with a palette knife.
Ridge the edges with a fork and then prick it all over at regular intervals to give a typical shortbread effect.Sprinkle with sugar.
bake for 1 hour in a pre-heated oven 180C/ 300F /Gas mark 3