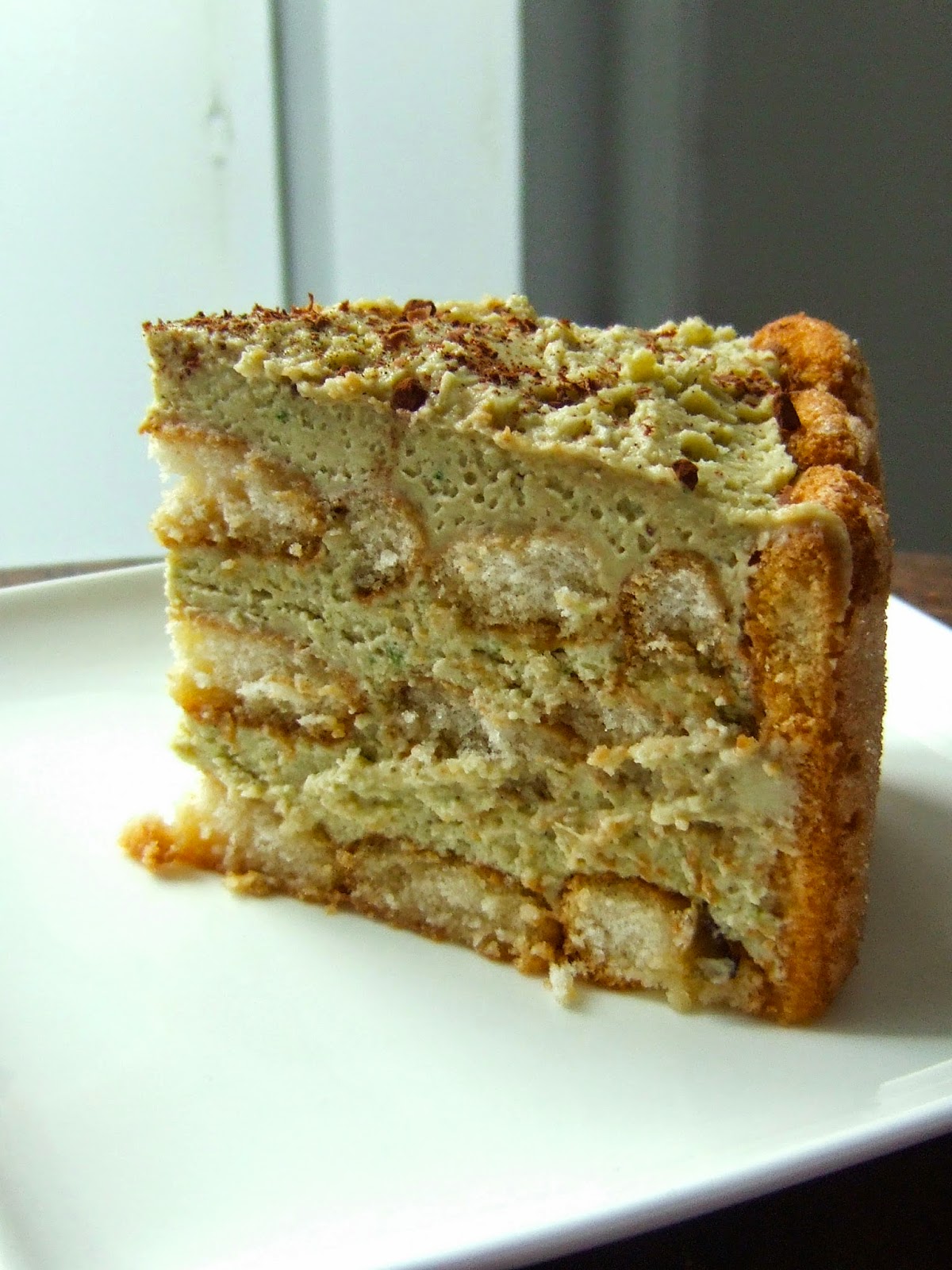 This post is something I have wanted to get off my chest for ages.This is the story of my chequered history and love/hate relationship with tiramisu. It harks back to the nineties when I first saw a recipe for green tea-ramisu in Australian Gourmet Traveller magazine or Vogue Entertaining, I dont remember which, but the tear sheet has long since disappeared from my "to be sorted" folder.Twenty years later it has come back to haunt me. I was recently tippling with trivia for my "Cooking with Colour board" on pinterest.The whole internet world it seemed was awash with pictures of tiramisu made with green tea.There are two reason perhaps why I have never made this. Firstly Matcha green tea is somewhat of a luxury commodity coming in at €20 for 80g, and secondly I have never been a great fan of some of the abominations that have been created in the name of tiramisu.When I did a screen test for Masterchef back in 1995 I upset Italian chef Madelena Bonino, one of the judges, who through her arms up in horror when,on the grounds that I disliked tiramisu, I put my alternative in front of her. She had missed the point completely. I was not trying to make a tiramisu.She repeatedly told me how my "tiramisu" should be much creamier.Quite clearly I had touched an over sensitive national nerve.I´d upset her and that was that, me out of the competition.
Since living in Portugal I have become aware of the nation´s obsession with and mega consumption of green tea, so I thought now the time had come for green tea-ramisu, made not with Japanese Matcha but with a more affordable Portuguese Gorreana green tea from the Açores. I checked and there is a traditional Açorean pudding made with green tea, Pudim de Cha Verde de Gorreana dos Azores (Green Tea Flan from Azores) but it did not look very appetising.It is more related to Pudim flan (Portuguese creme caramel) and my mission was to make a green coloured pudding.Gorreana green tea would never give me the colour that Matcha produces, but I was soul bent on making it 100% Portuguese.
Natural colourants often lend a more demure hue than their petroleum-laden cousins. A concentrated artificial food colouring requires only a few drops to add colour and thus doesn’t change the texture of the food by adding vast amounts of liquid. I kept my required final flavour in mind so as to avoid overwhelming it.
Green food colouring however is easy to create and very quick. Juice extracted from spinach is one such solution and does not taint what it is being added to,likewise avocado.I opted for the latter, mashing some ripe avocados and mixing them in with my other ingredients.This provided me  not only with a pale green colour to lift my pudding but also give it some texture. I was also removing the caffeine hit by dipping my biscuits in green tea as opposed to coffee.All in all a more subtle flavour, and the caffeine hit would be lessened ( Matcha can give quite a jolt too). So by "portuguesifying" tiramisu I seemed to be giving birth to a mutant confection.Here was something so delicious and spectacular that I defy even the most determined dieter not to succumb to temptation. What I ended up with was a cross between Bolo de bolacha and a semi-freddo ice cream cake. 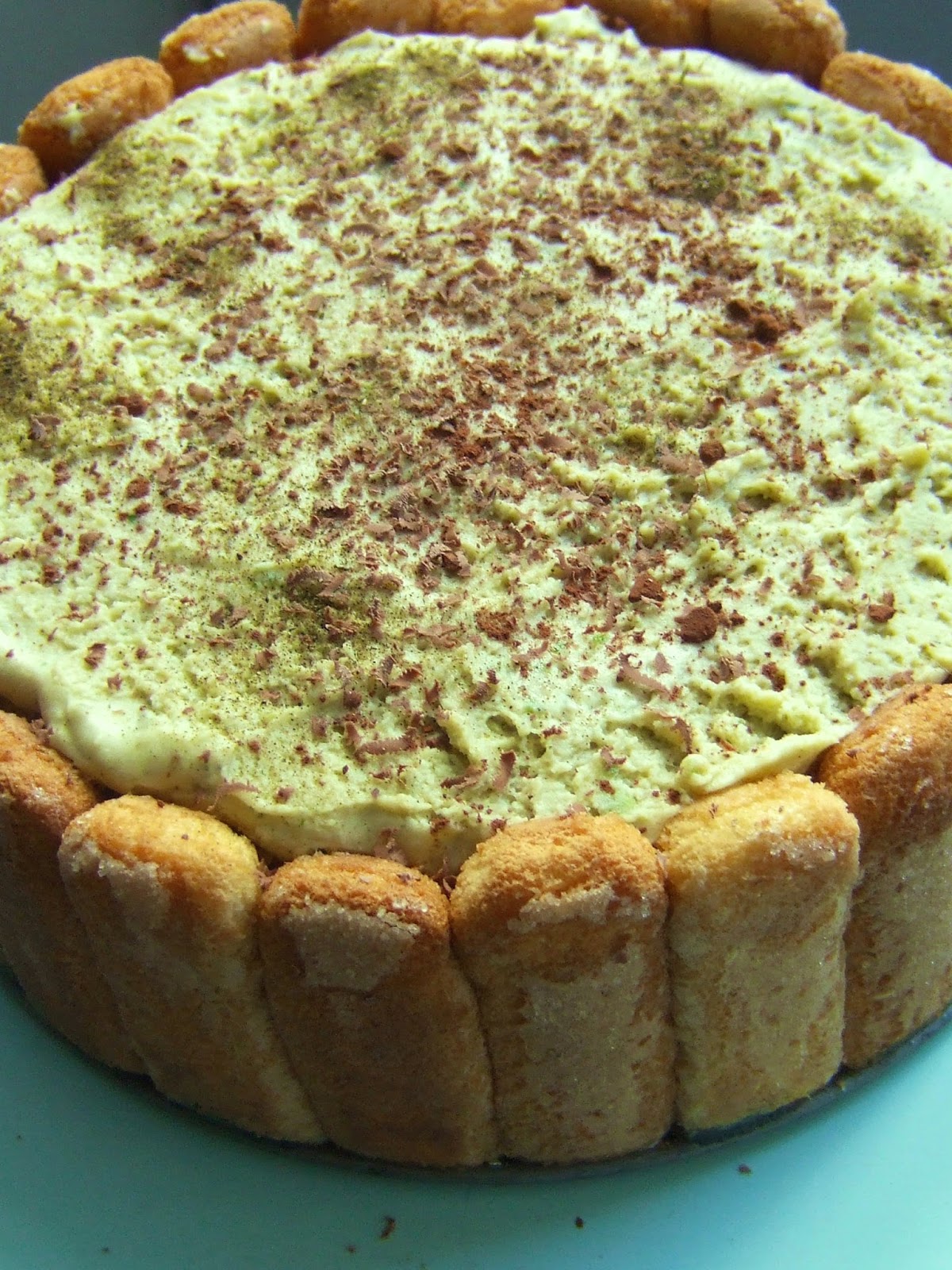 1-1 1/2 cups brewed green tea, cooled to warm
2 packets savoyard (ladyfingers) biscuits (I ended up using a bit more than 2 boxes of ladyfingers, because I doubled the recipe to do the picket fence(optional)

Beat the egg yolks and sugar in a  bowl  until the mixture is pale yellow and has doubled in volume. Set aside.
Beat the mascarpone cheese until smooth and creamy. Don’t overbeat it or it will get clumpy (though if that happens, it’s not the end, you can still smooth it out at the end with the cream).
Add the ground Gorranea in small amounts at a time, adjusting according to your taste. If you prefer a stronger tea taste, feel free to add another teaspoon of matcha powder. Mash the avocado with a fork to a smooth mellifluous consistency and then add it to the mascarpone and mix to blend well.
Fold the mascarpone cheese into the egg yolk mixture .
In a separate bowl, whip the heavy cream to soft peaks.
Fold the mascarpone mixture  into the whipped cream until well blended.

Count out the number of lady fingers you need to make a picket fence( optional) round the circumference of the tin.Cut the ladyfingers to height of the springform tin.
Dip each ladyfinger into the brewed green tea (don’t let them sit in the tea too long or you’ll get soggy ladyfingers but give it a second or two so they do get a little soft). I used a pie dish so that it’s easier to place the ladyfinger in the tea. Roll the ladyfingers over to get them soaked then remove them. Make a line of them around the circumference of the tin making the fence.Repeat the process with more biscuits but this time layering them crossways across the base of the tin inside the fence.
Spread the mascarpone cream mixture on top, and repeat with alternate layers of soaked biscuit and cream filling until finished (I made three layers of biscuit and three layers of filling ). The top layer should finish with the remaining the mascarpone.
Refrigerate overnight to let it set well. I find that overnight is best.
When you are ready to serve dust with ground green tea powder and finely grated chocolate just before serving.
Other things to do with green tea
Green tea jelly
Lime and green tea salt
Put green tea, lime zest and kosher or sea salt into mortar & pestle, grind or pound until finely crumbled (powdery) & mixed. Spread on sheet of aluminum foil or parchment paper & put in a low oven about 1 hour to dry.
Green tea shortbread
Green tea pannacotta