Jamon -an Iberican communion,for life not just for christmas 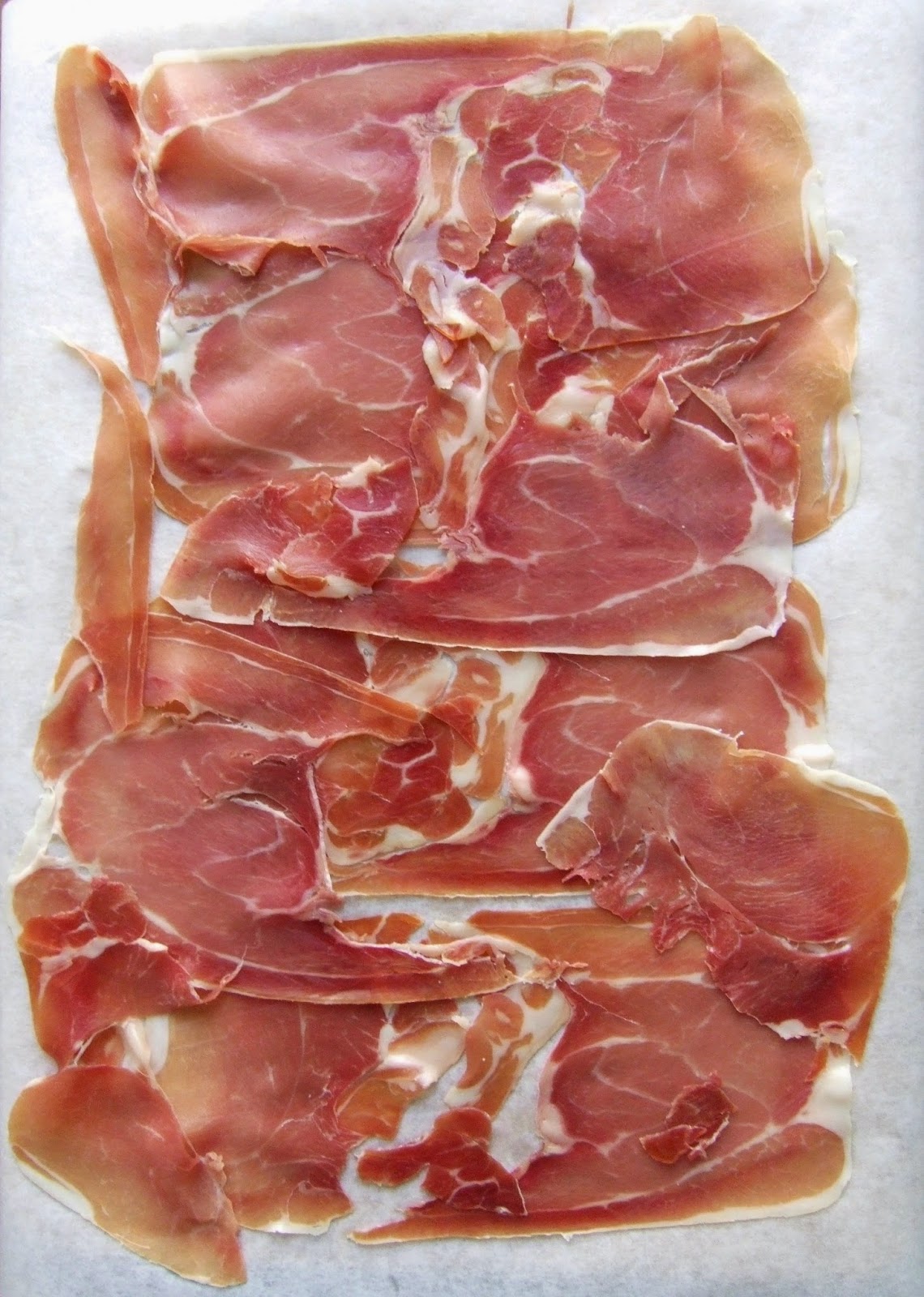 HELLO,is it meat you´re looking for? well you´ve clicked on the right page.So vegetarians click away now, because I am going to wax lyrical about cured meat.Yes and for those of you have got this far there are two Christmas recipes at the end.
My favourite ham, with apologies to my Portuguese brethrens, is not from Portugal but from our neighbour Spain,where Belotta and Pata Negra come from the Iberian black pigs.The free range, pure bred black pigs roam the ground looking for the  acorns,beans herbs and wild flowers that give them their distinctive flavour.
Jamón Serrano is Spain´s very special ham. It means ´mountain ham`because more often than not it is made in the mountain regions, where cold winters and hot summers are perfect for the curing process
These hams are not smoked, but cured,and served raw.
Who,when innocently first rubbing salt into the leg of a pig, could have imagined they would end up four years later with such a delicacy?
The hind leg of the pig receives a daily massage of salt for a month before being hung in airy curing rooms at high altitude for more than a year.This is surely an acclaimed miracle cure.Of all the foods that have been preserved out of necessity,surely ham is the most satisfactory. Many consider it a bit of a luxury and indeed it can be, (pata negra ´black hoof´ for example is very expensive ) but this is only because of a shopping habit of buying expensive miniscule packets in the supermarket rather than going to a proper( may I call it "Emporio Salami") delicatessen who will carve it for you off the bone.For me this meat is sacred and deserves a certain reverence.When you pass through the doors of these pig emporiums you are hit by a tantalizing aroma (indeed on one such pilgrimage my friend was overcome and had to leave the shop).The nearest I can come to describing this experience is having been in church as a child when I was often prone to fainting on my knees when the fragrance of burning incense was released from a thurible. Your impulse is to genuflect in respect as you watch the the wafer thin slices fall onto the white waxy paper as they are carved with artesan detail.You leave the inner sanctum feeling you have received not only a benediction but have acquired a capricious bulging package of wafer thin pig.My fridge is rarely without one of these, not only for Christmas but throughout the year. No hermetically sealed packets here, mother.
You return home and as you unpack your shopping basket a second wave of that pervasive bouquet returns.You lay the thin slices out on a white plate with a basket of bread and the ritual continues.

The flavour of jamon is less salty and overwhelming than bacon so it can be used in place of bacon in cooking.It works very successfully when wrapped around fish. I created two festive canapés using jamon.As a subtle foil to some monkfish tails I wrapped them in a slither of ham and charred them on the grill. My second trick was using jamon to elevate simple cheese straws.Woops,sorry, did I forget to mention that I always keep a pack of puff pastry in my freezer for occasions like this? 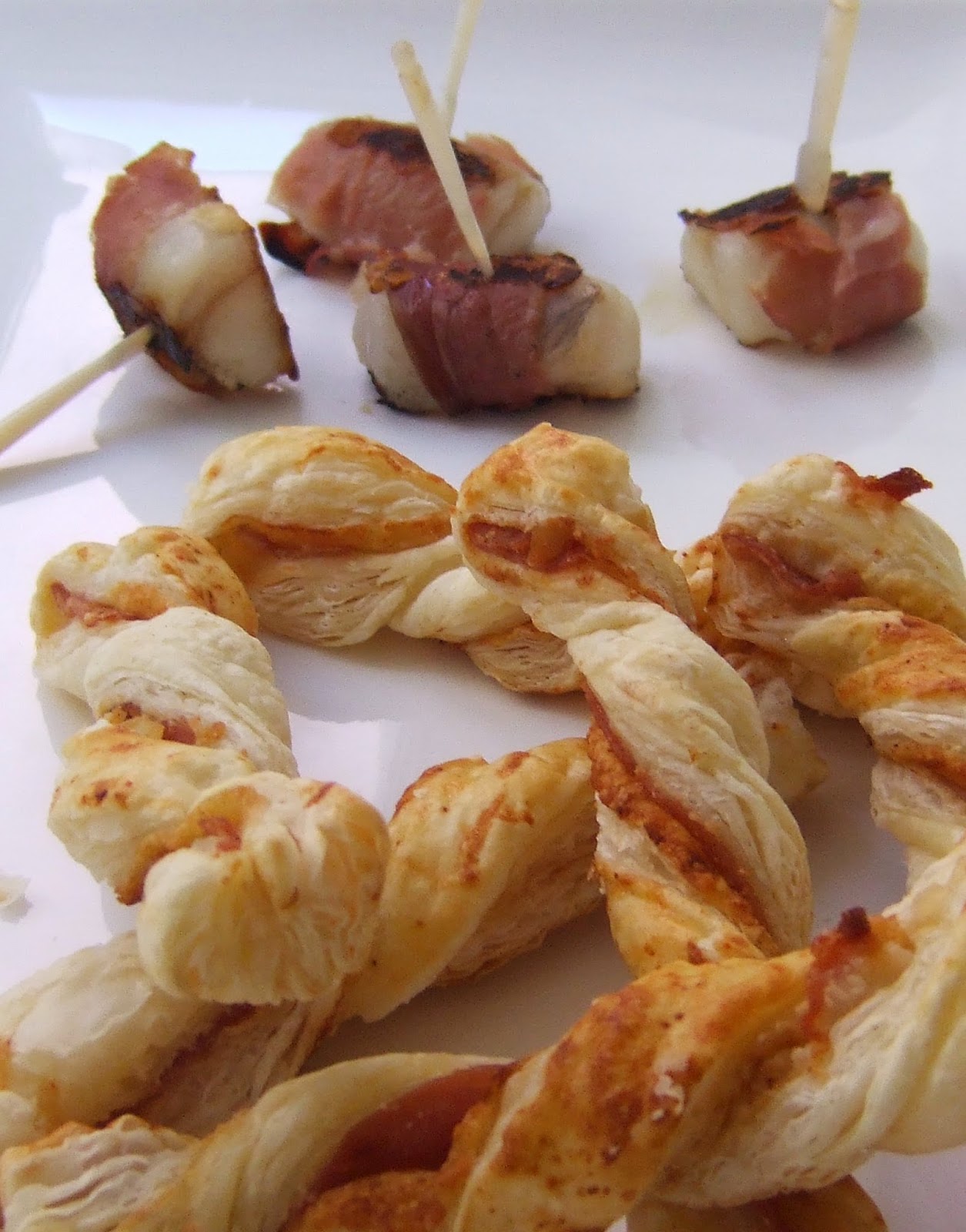 These tangy ham and cheese straws only take 20mins to rustle up and you make can  make 24 in a batch or 48 if you make them half the length which is great if you’re feeding plenty of people. A strong cheese like parmesan or if you want to be pure Iberican, a manchego, and cured Jamon  work well together. A sharp kick of Dijon mustard rounds off the flavour. Use ready-rolled puff pastry for extra speed and efficiency. Ideal for buffets or as party food, cook these twisty straws until they are golden and crisp.They can be made in advance,stored in an airtight tupperware and warmed through when you want them.
320g sheet ready-rolled puff pastry
2tbsp Dijon mustard
4 slices jamon serrano
60g Parmesan cheese, grated
1 egg, beaten
Cayenne pepper for dusting
Set the oven to 200°C/400°F/Gas Mark 6.
Roll out the puff pastry to a large rectangle about 40 x 30cm. Spread over the Dijon mustard. With a short edge closest to you, cover the half nearest to you with the jamon, laid with the short edges facing you. Sprinkle with half the Parmesan cheese, then fold the other half of the pastry down over the ham. Run a rolling pin over to help them stick and to flatten. Trim edges to neaten. Brush with beaten egg.
Cut into strips, towards you, about 1cm thick and about 20cm long.(10cm if you want to make double the quantity.
Twist each strip a few times before laying them on 2 baking sheets lined with non-stick baking parchment. Sprinkle with the remaining cheese and dust with cayenne pepper.
Bake for 12-15 mins until crisp and golden, swapping the trays in the oven halfway through. Cool on a wire rack. Serve warm.
Monkfish tail wrapped in Jamon Iberico
1 monkfish tail cut into bite size pieces
(if you have more than you need from one tail freeze the remainder)
Thin slices of Presunto serrano
Salt and pepper to taste
Cut your monkfish tail into the number of bite size pieces you need.
Season well with salt and pepper
Cut thin slices of ham to the width of your pieces and carefully wrap them around the chunks.The thinner the ham the easier it will be for you to secure them.
(You can prepare up to this stage and then store them in the refrigerator until you are ready to cook them).
Heat a grill pan( not ridged) to a medium to high heat.Place the wrapped pieces of monkfish join size down onto the grill and depending on the size of your pieces cook for 5-7 minutes until the ham is crispy and then turn them over and cook the other side for another 5-7 minutes.Remove from the grill and poke a cocktail stick into each piece.Serve immediately on their own or with a dipping sauce of your choice.my choice woiuld be a home made alioli.

Jamon a quick guide to buying
There are many grades of jamón ibérico, categorised primarily by the diet of the pigs. The curing process remains the same, but the length for which they are aged will differ, with the lower grade hams receiving little more than a year of hanging and the very best up to four years.
The age difference can be seen in the finished result, with the flesh of the younger hams having a lighter pink colour and those of older hams being a deep, ruby red. The taste too is very different, with the acorn richness of the jamón ibérico de bellota lingering on the palate like a fine wine.

Jamón ibérico de bellota
From pure Iberico pigs fed on a diet of acorns and granted DO status. These hams are aged for at least three years before being released, and often labelled 'reserva' and 'gran reserva' to denote their age.

Jamón ibérico de recebo
Fed on a diet of cereals and acorns and aged for at least three years.

Jamón ibérico cebo de campo
Free range, but fed only on a diet of cereals.

Jamón ibérico de cebo
Commercially reared pigs fed on a diet of cereals.
It is also worth sampling these excellent Serrano hams.

Jamón de Trévelez
Produced from white pigs which have been fed on commercial cereals, this is still a very fine ham, which fans say has a sweetness that comes from the climate in which the pigs are reared.

Jamón de Teruel
The first jamon in Spain to receive DO status, these mountain hams must be aged for at least 12 months after curing before being sold.