The year of the "cad"


One of my favourite songs back in the day was "Year of the cat" by Al Stewart, inspired by the film Casablanca.In a 2012 interview he described his writing philosophy —


If it’s already been written, why write it again? If it’s already been said, why say it again? I mean there are some remarkable quotes that I love. But I didn’t say them.
And you don’t want to pass them off as your own work. Napoleon said that “Time spent in reconnaissance is never wasted”.
And that, actually, has governed my life. You know what I mean? That’s a quote you can live by. But it’s not my quote. So if I say it I always credit it to Napoleon. There is another way of saying any of the things you want to say, rather than rehashing someone else’s words.

I bet you wonder where this is going? well this quote succinctly sums up what happened to this blog a few months back and still remains unresolved.When I started writing this blog four years ago all I wanted was to share with others my passion for food and cooking,and many of you have re-posted some of the recipes giving me an author´s credit.That is all I ever asked for, and that I would do the same in return.
Well back in October whilst visiting a friend, we inadvertently picked up a copy of a magazine for expats and on opening it, found one of the O Cozinheiro blog posts published word for word with absolutely no credit,and no credit for the photograph of which I had cleared copyright with its photographer.I had originally written the post in two languages,Portuguese and English.Not surprisingly the Portuguese transcript had been removed. 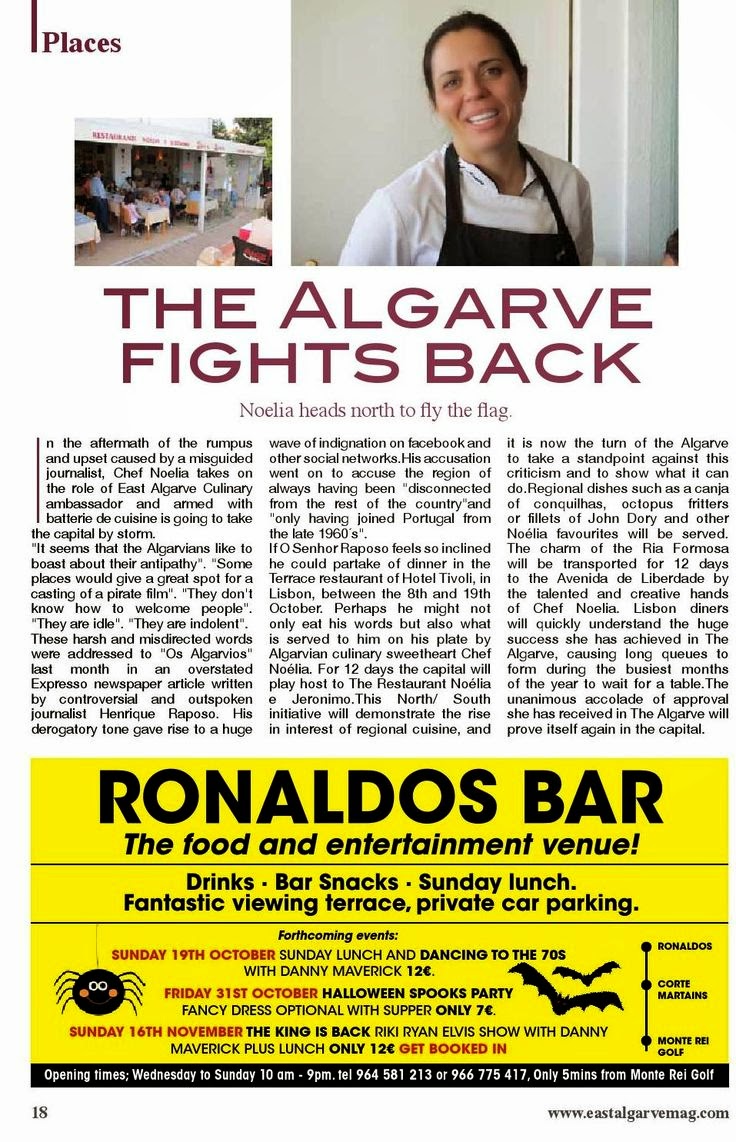 I contacted the rogue publisher who freely publishes both his and his wife Ange´s mobile phone number alongside an advert in the magazine for his Karaoke bar in Tavira. I politely asked him how he was going to address the theft and plagiarism of our blog.He asked me what I wanted and I suggested financial compensation.He asked how much, and having both of us worked in magazines ourselves, related it to the fact that the space given was 2/3 of a page with a 1/3 page advert below and therefore asked for a realistic going rate per line per word.He grunted and reluctantly offered me an insulting 10% of that amount.I laughed and rejected his offer on the grounds that a manual labourer earns more than that in an hour.We then went down the avenue of him writing a full apology and credit in his next issue.He agreed verbally but has never since honoured his word.He informed us by email that his magazine was closing using the words "Another nail in the coffin for the East Algarve".(I dont think so).2 issues on and still no redress, we have contacted him again,without any response.
The small print on the masthead of his magazine informs us that he is quite clearly a man of his word...

"All rights reserved.Except for normal review purposes,no part of this magazine may be reproduced without the written permission of the publisher.
Every care has been taken in the preparation of this magazine"

Quite clearly they haven´t. He informed me my blog post was submitted to him by one of his readers who considered the content would be beneficial to Chef Noélia,no doubt it would.He failed to check with them the source of their submission and then failed to gain clearance with myself or the photographer before he published.
The man is a cad and quite clearly has no respect or integrity,and is making financial gain through cheap journalism which steals other peoples work.
cad
A rogue, or bounder. A cad is a man who is aware of the codes of conduct which seperate a gentleman from a ruffian, but finds himself unable to quite live up to them. Cads are quite capable of disguising themselves as good chaps for some time, only revealing their true nature in circumstances of particular stress or temptation. Others embrace their caddishness whole-heartedly and delight in behaving in a manner which is, to be quite frank,dishonourable.

Happy New year to all honourable readers and please do ask if you would like to re-publish any content of this blog.I am sure I will be only to happy to oblige.To all you fellow bloggers out there,just beware of these rapists that come in the night and steal your work.
Email Post