Here´s one for you - You know the analogy about rats and sinking ships? I’ve always thought that it’s rather unfair on the rats – presumably they aren’t in charge of navigation and there’s a decent chance that most of the people on board have been trying to throw them over the side since the voyage began. Who can really judge them for leaving when things get tough? Sensible rats, I say.
As the cliff edge comes into view and the Uk populace rush like lemmings into the sea, plunging to their fate drowning in that divisive channel, or maybe disappearing in that mysterious Bermuda trianglesque border in the middle of The Irish Sea, its time to remember that underneath the cover of a pandemic the "downing street boys" are still orchestrating the consequences of the UK´s total no deal  withdrawal. The "B" word will never go away. Brexit transition day is going to prove to all but the diehard empire obsessed that like a sinking ship,in the coming years the UK is heading for disaster.
There is one myth however that has held on tenaciously: Every few years, herds of lemmings commit mass suicide by jumping off seaside cliffs. Instinct, it is said, drives them to kill themselves whenever their population becomes unsustainably large .Hmmmmmm probably due as some might think to a mass influx of illegal lemmingrants.
For one, it provides an irresistible metaphor for human behaviour. Someone who blindly follows a crowd—maybe even toward catastrophe—is called a lemming. Over the past century, this myth has been invoked to express modern anxieties about how individuality could be submerged and destroyed by mass phenomena, such as political movements or consumer culture. 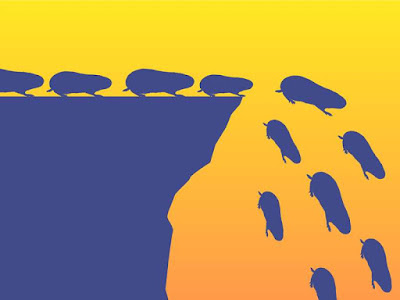 How should I herald the march of the lemmings I thought; nostalgia brought me to my senses. During my childhood, whenever my mum asked what she should bring ‘food-wise’ to anything – the answer was invariably  ‘ your Lemon Meringue’. She made the best and got thoroughly fed up with making them!  So, 60 years on at least, in full nostalgia mode, I’ve made Lemon Meringue Pie. There is only one way to make lemon meringue pie as i´ve found to my detriment. You can add orange juice to make orange curd or try Italian meringue for the topping but no, don´t mess with the recipe, a truly well made lemon meringue pie is a stroke of genius. There it was on a food splattered sheet in my mother´s hand. I have changed just one thing, I realise. There’s no margarine in my pastry!  (For those readers in the UK, my mum was an ‘Anchor and Cookeen’ girl and I’m definitely a saltless butter boy .) To you Portuguese bakers its Vaqueiro 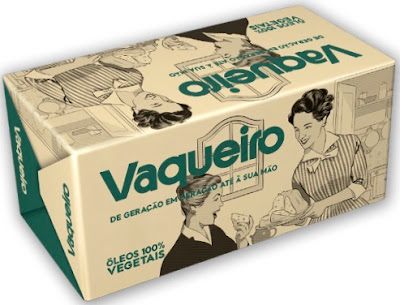 What I remember my mum particularly liked about this recipe was that it only used one lemon. Now, throwing austerity to the wind, I’m prepared to give any pie two lemons if needed.  But it doesn’t need it. Really.

Sift the flour and salt into a large bowl.  Add the butter and lard and ‘rub in’ until you have something approaching fine breadcrumbs.  Keep it all light.Sprinkle the water over and mix the dough with a round bladed knife until it starts to form lumps.  Bring together to form a ball.  Lightly knead until it is smooth and flatten into a disc.  Chill for a minimum of 30 minutes. 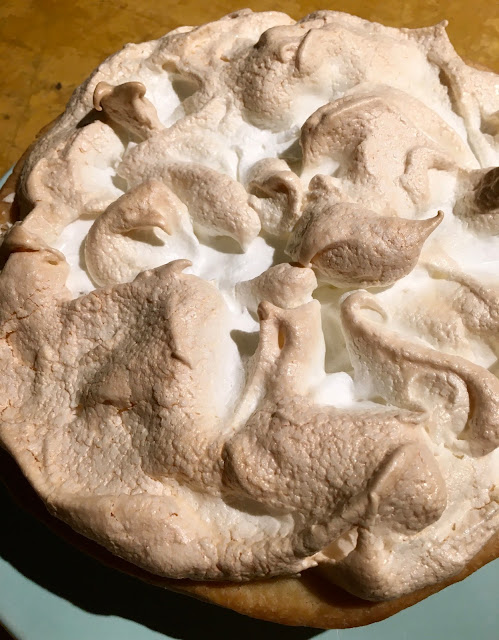 Pre-heat the oven to Gas Mark 6.

Roll out the pastry in even strokes and line a 7″/18cm flan tin and bake ‘blind’ for about 15-20 minutes, until the pastry is golden. Leave to cool and then remove from the tin.
Place on a baking sheet.Reduce the oven temperature to Gas Mark 2.
Peel the rind from the lemon, ensuring there is no white pith. Squeeze the juice from the lemon and put 3 tablespoons in a large bowl.
Put the lemon peel, granulated sugar and ½ pint/300ml water. Cook over a low heat until the sugar has dissolved, then bring up to a boil. Remove from the heat.
Blend 2 tablespoons of cornflour with the lemon juice in the bowl. Pouring through a sieve, add the sugar syrup. Stir.
Separate the eggs. One at a time, beat in the egg yolks and the butter. Return to the saucepan and heat until thickened. It’s ready when it’s thick enough to coat the back of a wooden spoon.
Pour the lemony mixture through a sieve into the cooked pastry case. Cool.
Whisk the egg whites until stiff and then add half of the caster sugar. Whisk again until the meringue is shiny and holds its shape. Fold in the remaining sugar leaving a little to sprinkle over the top.
Pile the meringue over the top, spreading from the sides to the middle and making sure the meringue makes a firm seal with the pastry case.
Sprinkle over the remaining caster sugar.Bake the Lemon Meringue Pie for 30 minutes, or until the top is crisp. Best served warm.Eat.
In hindsight I think my own recipe for the lemon curd is far better,but who am I to say?

A nod to a dear friend
Whilst on the subject of rats leaving sinking ships and lemmings jumping off cliffs, I would like to take this chance to nod to a dear friend I lost 26 years ago, the late Nick Wurr (co-founder of The Partners Design Group) Wurr, an enormous talent who died far too early aged 43 ( 18 February 1994), won a D&AD silver award in 1977 for a humorous poster (below ) when he was a graphic design student at the Royal College of Art.An example of how ’empty’ space can be used very effectively. This poster won a silver award for ‘most outstanding poster.’ The copy reads “There are now over 5 million dogs in Britain….and on this overcrowded island that is about 5 million too many. Fight the canine menace! Write to Nicholas Wurr.” 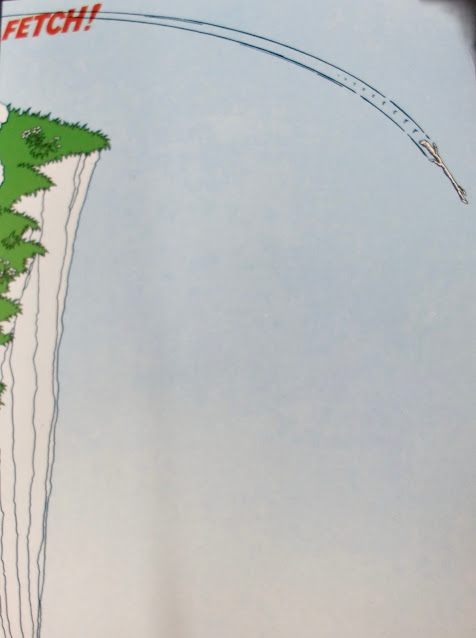 The Partners set up up a Royal College of Art bursary in 1995 in memory of their founding partner and former RCA student and tutor Nick Wurr.
Email Post