Why My Mum was my eternal muse 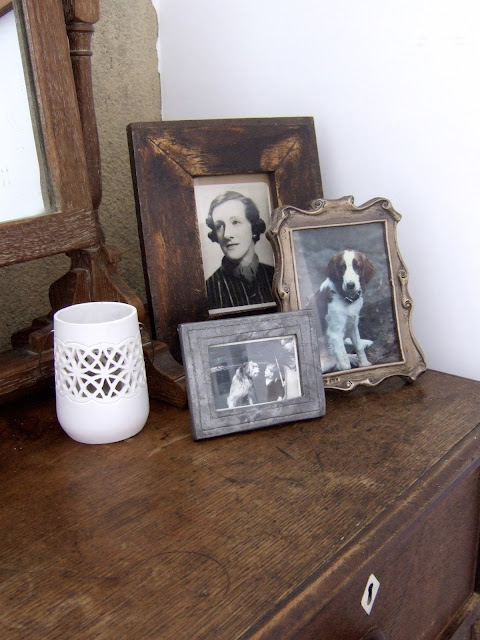 Food writer Laurie Colwin once said, “No one who cooks, cooks alone. Even at her most solitary, a cook in the kitchen is surrounded by generations of cooks past, the advice and menus of cooks present, the wisdom of cookbook writers.” This lady, self-described “refined slob” and passionate, idiosyncratic home cook, died in 1992. During her life, she gained a reputation first and foremost as a novelist and a composer of delicately calibrated short stories. But in the years since her death, at the age of 48, her following has only grown, and her highly personal food writing, collected in the books “Home Cooking” and “More Home Cooking,” has attracted a new, cultishly devoted generation of readers.She was best known for her portrayals of New York society and her food columns in Gourmet magazine. Her musings, anecdotes and quirkily imprecise, not-altogether-reliable recipes show up with regularity on food blogs. She has been cited as a kind of "proto-blogger." If blogs had been the order of the day back in the 1950´s I think my mother would have been that Ms.Colwin proto-blogger. Down-to-earth country recipes, alongside tips on canning, pickling, brining, making jam and even making cosmetics, were all subjects that she was always more than ready to share.I have always been proud to carry forward her legacy, something I am sure she would have admitted was not a plan. As a child, fabulous food was a constant presence in our home. You could write a book about my mum and her family, there was so much history there. My mum taught me more about cooking than I ever learnt along the road through industrial kitchens. You may have all the formal training but acquiring the creativity and personal stamp is something that cant  be achieved with qualifications. From a very early age I stood in the kitchen observing her from knee high and subconsciously recording in my memory how she was preparing the food and taking note of her methods. First and foremost she insisted on providing us with a cooked breakfast every morning. Some days it would be as simple as boiled eggs with soldiers and other days more lavish dishes like kedgeree, or one of my favourite breakfasts, kippers. I used to love her baked eggs. Scrambled eggs, fried eggs, bacon, sometimes fried mushrooms that we had gathered in the fields while out walking, grilled tomatoes, not all together as a fry up but alternated throughout the week. She would make lunch, this was bearing in mind that I would be at home all day, since I did not go to school until the age of eight.My mother disapproved of the head teacher of the local primary school and so opted for home schooling by herself. She would have been crossing dangerous territory nowadays. She would spend the afternoons baking cakes and breads not only for our tea but for coffee mornings, church sales and other such worthy causes.One of my favourite treats was her signature raisin loaf, warm from the oven with melting butter on each slice, or better still her home made shortbread. I mustn´t forget the coffee and walnut cake either. In summer she would make home made cream in vast quantities which she sold to the local farm to complement the strawberries they sold. To end the day our evening meal would be quite frugal, generally something on toast, or soup with cheese and biscuits.She was a tough lady, my mother. She was fiercely independent and it was all about community. Food was how she showed us she cared. Her sensibilities were forged in an environment where self-sufficiency, looking after neighbours and practical skills were prized.I sometimes had to rein her in and remind her she was the matriarch and that charity begins at home.       Whilst she was devoted to the local community and environment, she was also curious about the world beyond the Scottish borders. Mum loved learning about other foods and other cultures. She was accepting of everyone, every creed.
A one-of-a-kind woman I would say, and early on in the Covid crisis, when pasta was momentarily scarce and comparisons with rationing were plentiful, I reminded myself that if pasta had actually  run out, she would be my role model, Upcycling food waste on a micro scale in those days was  hardly an act of guerrilla activism, but caring was a skill in itself. By contrast, turning stale, uneaten bread into ice-cream, is doable and safe. Mrs Beeton made it, and so did my mum.Eyes might roll at her use of what might have been taken for scraps, but preferably they might wonder at her war on waste and the work that went in to putting together the ensuing dish. If she was ever the mistress of thrift, what I learnt from her was to be the master of leftovers. Much of what she cooked, aside from her dabbles with the Galloping Gourmet and La Craddock would be bang on trend now. Decades before Jamie Oliver coined the phrase "lovely jubbly" and Gordon Ramsay was Bourdained I remember the only condiments in most households were Saxa salt, pepper(white only), HP sauce and English mustard powder. Whilst you only saw spices and garlic on TV shows My mum was lavishly spreading extra home made beef dripping onto already well-marbled roasts, and liberally administrating cayenne or garlic to whatever. She still only used olive oil to loosen us children´s ear wax. Having lived through two world wars she was the Julia Child of her generation, stirring up a storm of thick iconic life saving soups. So I know where I picked up that skill. 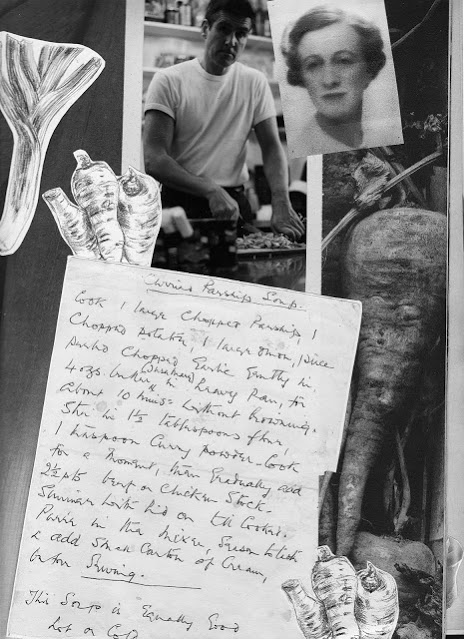 A page from my foodie scrapbook with the recipe in my Mother´s own handwriting.What a fantastic heirloom, and a reminder of childhood times back home in Scotland.

She was the mistress of invention. Whatever ingredient was not cited in the recipe she would introduce with "gay" abandon. She, of course ,used that word in its old fashioned adjective form of being colourful, carefree and cheerful. Those were the days!!                With an economic downturn looming and lockdown trundling on, knowing how to fry a squirrel (only joking) or make soap out of beef tallow now seems like a sensible plan.
At the age of 20 I left home with my mother tucking a copy of  The Cookery Year - Reader's Digest under my arm....and the rest was history. 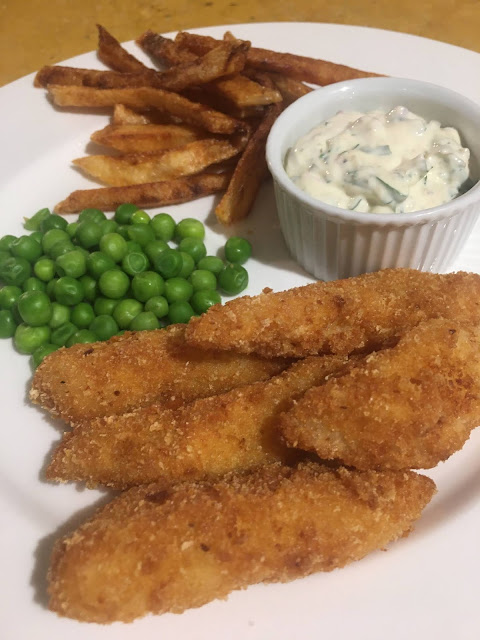 Goujons of Sole With Tartare sauce

I have picked one of my mums favourite recipes, obviously not one of her own but nevertheless one of the time and also one that does not seem at all out of place today. From the Katie Stewart Times cookery book

Ask the fishmonger to skin and prepare the sole fillets for you. Rinse and pat them dry. Cut each fillet in half making a slantwise cut right across – the same angle as you would slice a French loaf. Then cut each half lengthways into 3–4 narrow strips goujons. Toss these in seasoned flour, then shake in a sieve to get rid of the surplus flour. Lightly mix the egg and oil in a shallow plate – the addition of oil makes the egg go further, otherwise two eggs will be required to coat all the fish pieces. Dip the goujons first in the beaten egg mixture, drain and then roll in the brown crumbs. Shake away any loose crumbs and pat coating on firmly. Up to this stage the goujons can be prepared in advance and pieces of fish kept to fry at a later stage.Combine together the mayonnaise, cream, capers, gherkins, parsley and onion for the tartare sauce. When ready to serve, fry the fish in hot deep fat until crisp and golden, about 2–3 minutes. Drain thoroughly on absorbent kitchen paper. Sprinkle with salt, garnish with lemon wedges.Serve with the tartare sauce.