My favorite bread-baker, Dan Lepard, recently posted a recipe for Sherry Raisin Bread, Here's how Lepard explains the role of  sherry in baking: "From a simple syrup for soaking a fat baba in or spooning over fruit cakes or puddings, to using it instead of milk or water, sherry adds a gentle flavour that lends richness without being immediately detectable".
Doesn't that sound good? My mother was renowned for the batches of raisin loaf she would bake for various parish occasions where a congregational afternoon tea was called for. So inspired by Mr Lepard, following in mothers footsteps, a bottle of sherry in hand and with a certain nostalgia creeping in I set out to see how a humble parochial fruit loaf could stand up to a distinctive piece of modern confectionary.Let the battle begin.
My mothers Raisin loaf 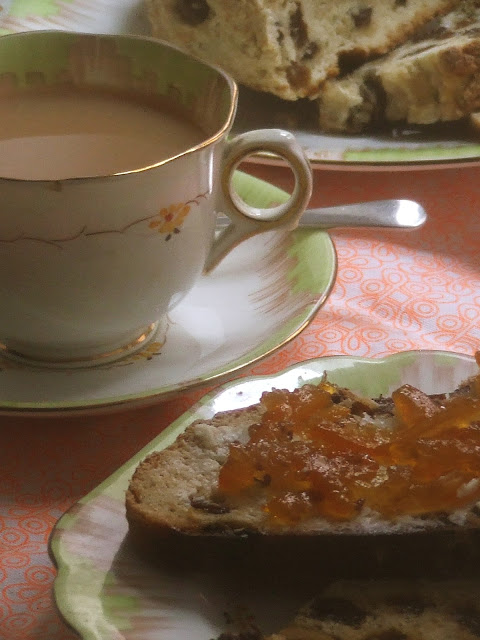 200ml medium sherry, such as oloroso dulce
200ml whole milk, plus a little extra for brushing
100g Seville marmalade
2 level tsp fast-action yeast
300g raisins
175g chopped almonds ( I omitted these)
500g strong white flour
100g rye flour ( I omitted this and upped the content of strong flour)
2 tsp fine salt
Oil and flour, for kneading and shaping
In a big bowl, stir together the sherry, milk, marmalade and yeast, add the raisins and almonds, and mix well. Add the flours and salt, work everything into a rough ball of dough, then cover the bowl and leave for 10 minutes. On a lightly oiled or floured surface, lightly knead the dough for a bare 10 seconds, return the dough to the bowl and leave for about two hours, until puffy and risen by half. Pat out the dough to about 2cm thick, then roll up tightly into a scroll and place seam-side down on a tray covered with nonstick paper. Cover with a cloth and leave for about an hour, until barely risen by half.
Heat the oven to 200C (180C fan-assisted)/390F/gas mark 6, brush the top of the loaf with milk, and cut a 1cm-deep slash along the centre. Bake for about 40 minutes, until the crust is a good, rich golden-brown.

My findings:
The Lepard version is heaving in calories particularly if toasted and slathered with lashings of marmalade and home made jams.Nothing wrong with that.
Both versions can be frozen whole or in individual slices which comes as a huge plus for me.I can whip a few slices out of the freezer for Casa Rosada breakfast guests and not have to worry about using up or wasting an entire loaf.Hmmmm,I feel quite smug about that. Pantry management at its best I would say.On the taste front I think Mr Lepard has a slight edge here.The addition of Seville orange marmalade is wicked and the sherry gives it that indefinable richness that perhaps my mothers loaf lacks.Mr lepard wins again visually.His rich golden crust makes his loaf more appealing to the eye and the slash down the middle gives it a rustic feel.Again when sliced the Lepard loaf looks more appetising and his texture has more moisture content.However when toasted mother´s loaf comes out on top.The Lepard loaf does not toast successfully. But and a big but my dear mothers version takes under an hour to produce including prep time.The Lepard version is over four hours start to finish.I wonder what would be the result if I were to produce a mutant version of the two; a quick and easy Mothers loaf with added sherry and marmalade.I can but try, but they always say your mother should know.
A word of advice:
The Lepard effect is subtle, so don't  be tempted to splash out on an expensive brand (though it's rarely that pricey).
Email Post