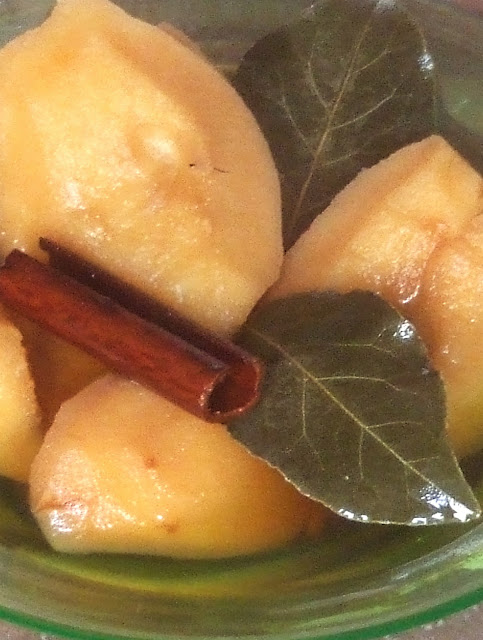 If the truth be known,did Eve really bite into an apple that she plucked off the forbidden tree of knowledge of good and evil in the Garden of Eden? No specific name is given to the fruit she tasted from that tree, though apples are mentioned later in the Bible.According to the great food writer Alan Davidson, the apples mentioned in the Song of Solomon were almost certainly quinces. Some historians believe Eve's fruit of temptation might have been a pomegranate or possibly even a quince.Whatever it was it was an early example of culinary opportunism.
´Tis the season of the quince - don't nobody love our noble quince? Won't someone take the poor, unloved quince under their wing? It´s true, the quince doesn't have the sex appeal of a Grade 1 shiny waxed green apple, or the brilliance of a polished persimmon. Its rather jaundiced, mottled skin, sour taste, and lumpy shape isn't seductive either.These lumpy golden fruits have skins that are mottled and dusted with a light fuzz, like the cheeks of spinster great-aunts.These are the quintessential fruit. Quince charming can be easily transformed into marmalades, jams,chutnies and jellies that have been revered  for centuries throughout the Middle East and Europe. And what about a generous dollop of quince preserve on toast to make one´s breakfast more enjoyable? One heavenly mouthful of ambrosial nirvana.Now you´re talking.These quince preserves were called quidoniac or quiddony – names that now remind one more of Hogworts and Harry Potter than Kydonia (from which they derive), where the ancient Greeks grew varieties of the fruit.
Stews that combine sour fruits, such as quince, with meats are traditional foods in Iran and still remain popular today. Iranians also peel and core the quince and stuff the cavity with meat stew.
Moroccan cuisine incorporates the quince in its highly seasoned tagines, stew-like combinations of meats and dried fruits often spiced with cinnamon and cloves.


In Britain the quince was incorporated into its cuisine in various pies and tarts, often appearing in apple pies where it added a unique flavour and a hint of pink colouring. The British also prepared a sauce made from quince that became a traditional accompaniment to roasted partridge.
Quince, like the apple and guava, produces a natural pectin* when cooked, making it ideal for jelling.
Although the most favoured quince marmalade, called marmelada, originated in Portugal during the 1500's, the British have been preparing many versions of marmalade  ever since. Joining the marmalade brigade is the Italian version called cotognate, a preserve that is still prepared in Southern Italy today.
I´ve done the marmelada,the tarts,the preserve so I decided to go back to basics and serve up a simple bowl of quartered quinces poached in Casa Rosada´s own 2010 vintage of Licore de laranja.

I´d poach any fruit in liquor, I, but the quince is one of the more obvious choices,having the added character of aquiring a little blusher while it cooks,the flesh is white when raw but becomes a delicate pink when cooked.I normally poach quinces on the stove top but in this case I decided to experiment a la Nigella and poached these in the oven.It is A slower process but it ensures that the fruits hold their form and and the soft pink carnelian liquid does not burn off, and allows them to acquire beautiful rusty tones as it cooks.Not only that you have the pleasure of filling your home with a princely "perfume" that would have made Patrick Suskind´s Grenouille  give his eye teeth for.
4 quinces
700ml licore, Moscatel, Grand marnier,triple sec,
curaçao or any other orange based liquor
300ml water
500g sugar
1 cinnamon stick
2 bay leaves
2 cloves
6 cardamom pods
6 peppercorns
Pre-heat the oven to 160C /320F

Fill a bowl with cold water and add the juice of 1/2 lemon.Peel the quinces,quarter them and core them.As you finish preparing each quarter, submerge the quinces in the bowl of water with an inverted  plate over them to keep them immersed.This is to stop them browning until you are ready to cook them.Keep all your peelings and trimmings as they will help to thicken* your syrup. 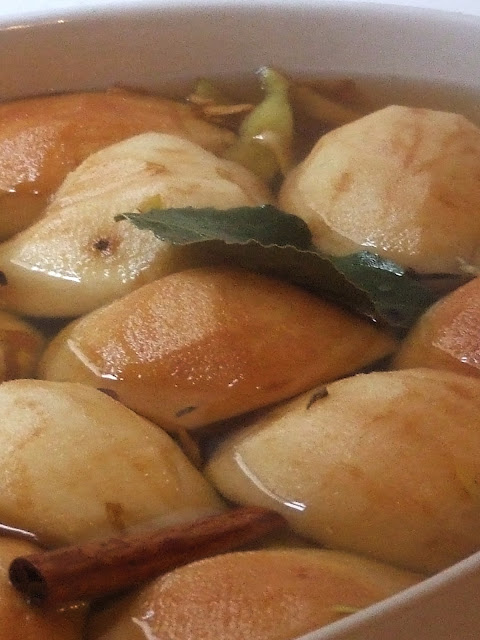 First make your syrup by putting the licore of your choice,water,sugar and spices into a pan and bring to the boil.Put your reserved peelings, including the cores, into the bottom of a large oven proof dish.Put the quartered quinces in a single layer on top and pour the mixture for the syrup over the top.Cover the dish securely with foil and put in the oven for two and a half hours.After this time the quinces should have taken on a vintage cami knicker pink colour. Leave the quinces to cool in the dish without removing the foil.The colour of the fruit will intensify as it cools.
When completely cold,remove the fruits with a slotted spoon and put in a glass bowl.Strain the remaining syrup into a saucepan and over a medium heat let it reduce.Being careful not to burn your tongue, taste the liquid every so often for your desired consistency bearing in mind the syrup thickens as it cools after you have removed it from the flame, so you do not want to  over-reduce it.You want a syrup not sticky toffee.Pour the syrup over your quinces-in-waiting.Keep any syrup you may have left over for another occasion,maybe ice cream or a humble crumble.
Email Post