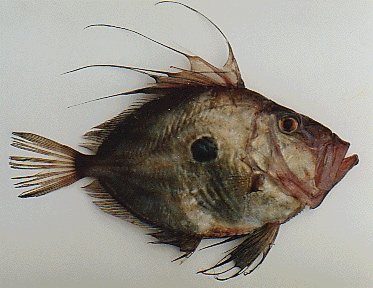 The uncouth appearance of this fish gave it the name of L´enfant terrible in some parts of France where it has also been known as poulet de mer.Its compressed body with tell-tale stigmata on its sides attribute it to Saint Peter (São Pedro).
Unfortunately its grim image has deterred some from eating it, which is a great pity.There is no l´horrible about it. If treated like fillets of sole or flounder this fish yields fantastic bone-free fillets of succulent white flesh.The only thing you must take into account is that the proportion of fillets to the whole fish is unusually low.If you are offered "Half Saint Peter with chips", it is probably a fillet of John Dory.
I have taken the classic British "Fish and chips" with mushy peas and ketchup and imagined what the Portuguese interpretation might be. 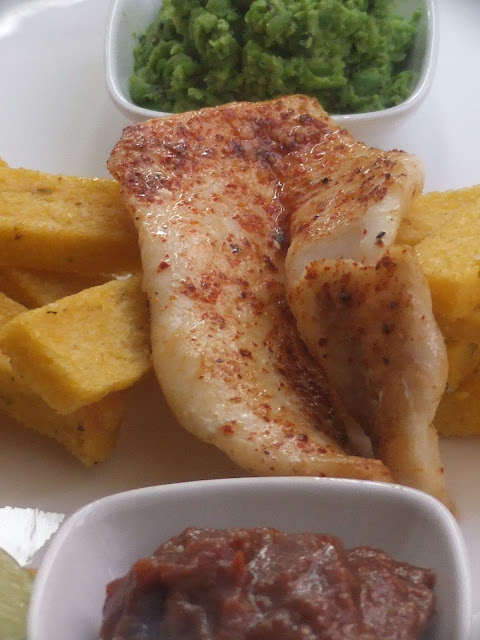 For the tomato ketchup
Heat the oven to 200C/400F/gas 6.Put the tomatoes, cut side up, in a roasting pan and sprinkle over the garlic,sugar,cumin,thyme,spice and vinegar.Roast for 30-45 minutes until soft.Put the roasted tomatoes into the processor with the tomato purée and mustard.Blend until smooth and then pass through a sieve and adjust the seasoning.

To make the Papas de milho chips
Bring 800ml water to the boil in a saucepan, season generously with salt, pepper, dried oregano and fresh rosemary.Gently whisk in the papas de milho, bring back to the boil and cook over a low heat,stirring constantly for 5 minutes.Pour the hot papas de milho onto a previously greased baking tray in a 5mm thick layer and leave to cool completely.
Re-heat the oven to 220C/400F/ Gas 6.Turn the cooled papas de milho onto a flat board and cut into 4cm x 5mm chips.Toss lightly in a little sunflower oil and return to the baking tray.Bake for 45 minutes, turning them from time to time until crisp and golden brown.

For the Minty mushy peas
Put the peas, 25g butter and stock in a pan and season well. Simmer for about 3-4 minutes (you want the peas to stay bright green) then put in a food processor or blender with the mint and whizz to a purée. Put back in the pan and keep warm

Lightly dust the fish with piri piri and Flor de sal.In a non-stick frying pan heat the oil until smoking, and fry the fish for 3-4 minutes,turning once until cooked.

To Serve
Stack the chips on 4 serving plates and lay the fish carefully on top.Squeeze a little lime juice over the fish and serve with the ketchup, mushy peas and a lime wedge.