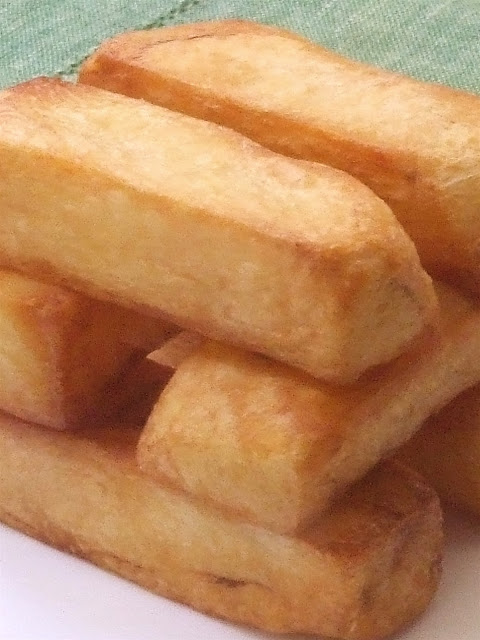 Well I knew the Pont Neuf bridge in Paris was famous for many things,in particular being wrapped up by Christo and Jeanne Claude in 1985, (It took the artists 10 years to gain proper permits and support from the city of Paris to wrap the Pont Neuf. Even after that the people of Paris argued over whether this project was art or not) but when Chef Marco at Cha com Agua Salgada recently served us up a veal fillet mignon with Pont Neuf potatoes, that was a first for me. Big fat chips uttered the Thespian, as he tucked into these delicious chunks of crispy encased fondant potato.Bridge potatoes I said,putting it quickly in my back head for later.I knew right away that this was something that I needed to research further as a potential dish for Casa Rosada; something by way of an interesting side to the main game or perhaps fish dish that we would serve our guests.
Have you ever thought that by renaming a dish it suddenly acquires a new dimension. I had the new name and was immediately thinking in terms of how I would present the dish.Jenga potatoes it was to be. Just as Christo had played a game with the Pont Neuf I was going to play a game with potatoes.Jenga is a game of  physical and mental skill. During the game, players take turns to remove a block from a tower and balance it on top, creating a taller and increasingly unstable structure as the game progresses.What fun, and could this new presentation get children to eat their food. It becomes fun to eat-like playing with a puzzle on your plate, and replaces the old fashioned parental hoax of trying to encourage the child that if he ate his food  he would be able to see the nursery rhyme picture on the bottom of the plate.

They should be soft, fluffy and hot inside, and never so crispy that they shatter in all directions when you try to stick your fork in them.

You want to use very floury potatoes, and preferably ones that have been in storage for a while to develop even more starch and get more floury.

Read more: http://www.cooksinfo.com/pont-neuf-potatoes#ixzz2CaMttcyD
Pommes Pont Neuf are basically squat chips, thick-cut french fries cooked twice.They should be soft,fluffy and hot inside, and never so crispy that they shatter in all directions when you try to stick your fork in them.You need to use very floury potatoes.

How to cook Pont Neuf Potatoes
Serves 4
This recipe may seem a little long-winded but it really is worth it and on the other side, the majority of the work can be done in advance,one reason I like it.The potatoes can be cooked twice,then kept in the fridge for at least a week, before the final cooking.I used ground nut (peanut)oil as it is very pure and odourless.You could try goose or duck fat and they would be equally delicious.

1.5 kg potatoes,washed and peeled
1 litre groundnut (peanut) oil
Using a sharp kitchen knife,square off the potatoes into rectangular logs.Then cut them into chips about 1 cm thick.The length of the  pieces is not so crucial, but you do want to keep them the same thickness,so that they cook at the same rate.Place them straight into a bowl of cold water and keep them there for about 10 minutes to rinse off some of the starch.Rinse again and drain.

STAGE 1 Bring a large pan of salted water to the boil and plunge in the drained potatoes.  Bring back to the boil and simmer gently for about 10 minutes,or until the point of a knife easily penetrates the chips.Make sure the water is only just simmering;if it boils too agressively the potatoes will begin to break up before they are sufficiently cooked.
Using a slotted spoon,lift the potatoes carefully out of the and place them on some paper towel on a flat plate.Allow them to cool,then put them in the fridge until cold.The chips will harden as they cool.

STAGE 2 Heat the groundnut oil in a deep fat fryer or deep pan and heat to 130C/250F.Plunge in the chips.You may have to do this in batches.After about 5 minutes the chips will take on a dryer appearance before colouring( do not let them colour) they have now finished their second cooking.Drain,let them cool to room temperature and then put them back in the fridge.

STAGE 3 When cold,they are ready for their final cooking.Re-heat the oil to 180C/ 350F.Plunge in the chips and cook until golden brown( about 10-12 minutes)To get a crisp outside you need to patient.Drain and season with plentiful Flor de sal.Eat on their own with garlic aioli, mayonnaise, or any kind of ketchup or tomato relish.Alternatively serve as a side dish to fish or chicken.
Email Post