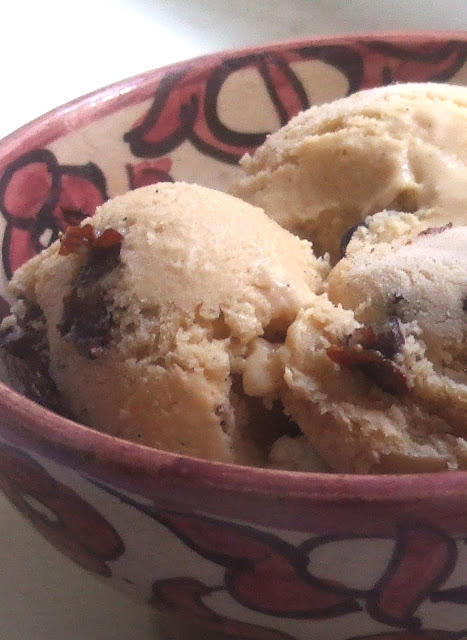 Do you remember the legendary flavour of rum and raisin ice cream? For the greater population of Andalucia, in particular the residents of Malaga,the famous Helado de pasas was imprinted on their brains from childhood.It is that memorable that it outlasts adolescence into adulthood. A sundae in Malaga, even in sunny weather, may not be everybody´s idea of heaven.I am sure one can still purchase a tub of this particular ice cream in the cinema foyer or from the usherette in the intermission, and with a cracking new Bond movie coming to a screen near you its perhaps the time to remind ourselves how good the old rum and raisin ice cream was. I would go one step further in offering you this fascinating take from those double Sams-the Clarks of `Moro´ in London.So play it again Sams, your recipe for this cream of Andalucia certainly pushes my button and is most definitely double ohhh heaven.It is so easy to make, and no dry ice in the house Mr Blumenthal.The key ingredient to the Sam and Sam twist is not rum but my most favourite tipple this side of Seville, Pedro Ximénez sherry.This sherry combines a complex amalgam of figs, raisins, and plum pudding in one glass, so can you imagine what it is like infused into this boozy ice cream recipe and then served with a glass of the same nectar to accompany it. And oh my god, I nearly forgot to say if you really want to go over board pour a little of the sherry over the top of each serving.

Place the cream,milk and cinnamon stick in a large saucepan.Split the vanilla pod in half lengthways and scrape the tiny seeds into the pan.Heat until just below boiling point,then remove from the flame.Beat the egg yolks and sugar together for 5-10 minutes until pale and thick.Loosen the egg with a little of the cream/milk mixture,then pour the egg back into saucepan,scraping the bowl out with a spatula.Whisk well to mix everything properly and return to a low heat,stirring constantly.Heat gently to cook the custard but be careful not to let it curdle.When the mixture starts to thicken,remove it from the heat,pour into a bowl and place over iced water to cool.
churn in anice-cream maker( in batches if necessary ),adding the raisins and sherry towards the end of the churning.If like me you do not have an ice-cream maker,try freezing the ice cream by hand stirring it every half-hour to prevent crystals forming.Stirring will also help distribute the raisins evenly and prevent them from sinking to the bottom before the custard hardens enough to suspend them.This process will take about 2 hours depending on the temperature of your freezer. And here is my serving suggestion......