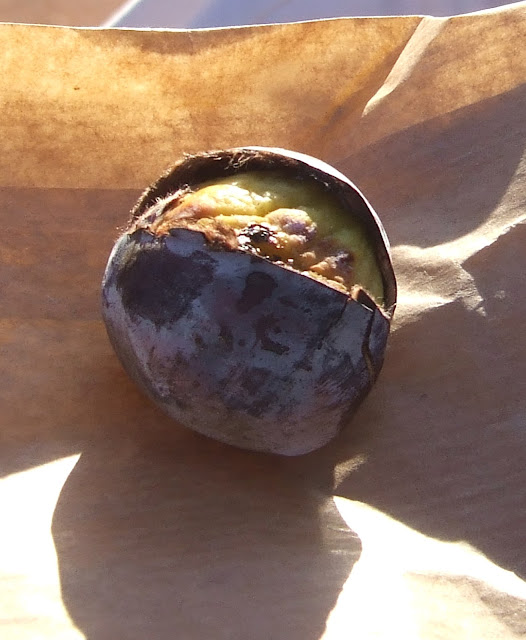 If you’re in Portugal on November 11, you’ll want to be at a Magusto.
Today Casa Rosada was invited by Quinta do Barranco Longo to Magusto 2012 in the castle of the medieval town of Silves.
"Magusto" is believed to come from the Latin magnus ustus or “great fire”.
Traditionally November 11th is Dia de São Martinho.It is not only Portugal but many parts of the world that celebrate St. Martin’s Day,  but all over Portugal, in many communities, a large party is held.
For those not attending one of these organized parties,many Portuguese restaurants offer special menus and events.It is the first day the new wine can be tasted.

The day also celebrates the debut of the castanhas(chestnuts),which this year, due to the lack of rain, will be fewer but I am informed, significantly better.Bonfires are lit and the chestnuts are roasted.


Supposedly the peak of three days, often with very good weather, it is known as Verão de São Martinho ("Saint Martin´s Summer"). It is a holiday honouring Martin of Tourinho, a 4th century Roman soldier who is known for a certain miracle. Riding on horseback in a snowstorm, Martin came upon a nearly naked beggar. Not having any money or food, Martin took his sword, cut his cloak in half and gave the cloth to the beggar. Legend has it that clouds dispersed, the sun came out, and Jesus said to the angels, “Here is Martin, the Roman soldier who is not baptized; he has clothed me.”( chance would be a fine thing the last 10 days have seen a constant deluge of much needed wind and rain).Beggar or no beggar, passing soldier or not, I think anybody´s dream last week would have been a valiant rescue from the downpour with a torn mac from a moist Mr Darcy on horseback.

Today the weather could not have better suited the occasion. During the course of this lovely sunny afternoon in the confines of a Moorish Algarvian castle we had the chance to sample a glass or two from the ever expanding range of Barranco Longo wines.These were soaked up by Feijoadas,the best pork Bifanas I have ever tasted,roasted chestnuts and, when the sun went down, jackets and coats came back on and it was time for a bowl of piping hot  pumpkin soup and an assortment of Portuguese cakes and pastries.

Oh How we quaffed,oh how they danced and it was even better with the band. Oh how much we enjoyed the ambience of this annual celebration.Thank you very much Rui Virginia for a lovely day.