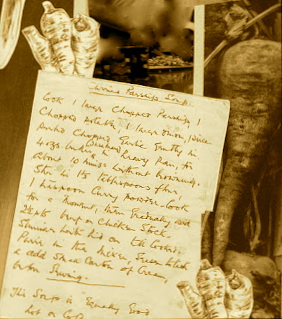 I opened the door of the fridge and the last parsnip beckoned to me.On Christmas Eve we were the lucky recipients of some beautifully cellophaned and ribbon wrapped parsnips, transported in her suitcase by a dear friend all the way from England.What a wonderful surprise this was after having crawled despondently home from the supermarket the previous day, finding what probably were the last two parsnips in Portugal.They certainly looked like they were the last two neglected specimens and I felt guilty not having given them a chance to share our Christmas table with us.Parsnips (pastinagas)are like gold dust here in the Algarve, so when I see them I become filled with a panic parsnip buying frenzy, shovelling them into carrier bags until they are almost splitting under the pressure.Christmas is not complete for me without a parsnip,so luckily the day was saved and after there was one left for ....

January 4th........Freshly returned from a blustery January walk on the beach with the dog I was in search of some ingredients to piece together a warming hearty winter soup that would keep that cold North wind at bay.My mothers curried parsnip soup came to mind,and because of the parsnip´s infrequent appearance there was even more expectation.I decided to follow her original recipe in its true form,even including a tablespoon of flour,which I would not normally include in a soup.My teaspoon of curry powder was made up of a heaped mix of ground coriander, turmeric, ground cumin and a touch of garam masala.My only break with what she had written down below was a handful of coriander, of which I separated the stalks and the leaves.The former I cooked down with all the vegetables at the beginning and introducing the chopped leaves into the soup when I puréed it 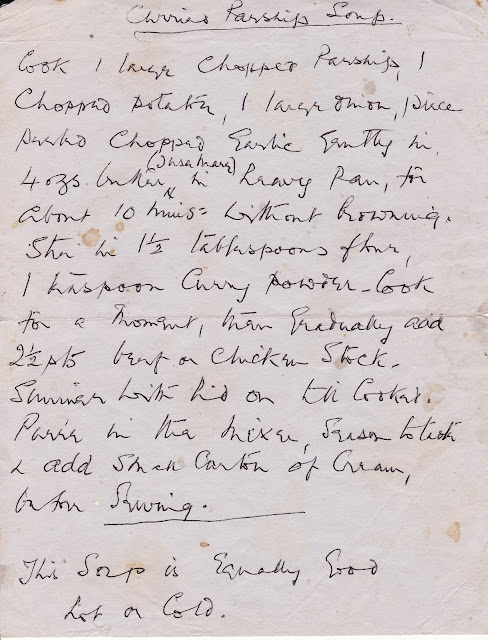 Mother´s original recipe
Cook 1 large parsnip,1 chopped potato,1 large onion,1 piece of peeled chopped garlic gently in 125g( 4oz) butter (she used margarine) in a heavy pan for about 10 minutes without browning.stirthen gradually add 21/2 pints (1.5litres)beef or chicken stock.Simmer with lid on until cooked.Purée in the mixer,season to taste and add a small carton of cream,before serving.

This soup is equally good hot or cold