Pumpkin cumin and chilli soup in in a pumpkin pot 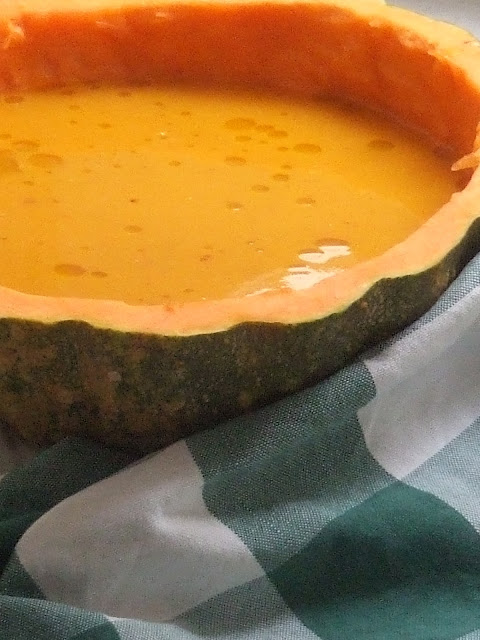 Yesterday I made a batch of Pumpkin jam.Todays recipe, as promised, is for a
spicy soup that really "warms the cockles of your heart."(that is delighting your innermost feelings).I have just discovered that a Kachel is a Dutch oven. Something that radiates heat.Could it be that the expression is a corruption of the phrase, "May it warm the kachels of your hearth." A kacheloven is fuel efficient and apparently radiates heat long after the fire is out.This explains why the phrase is always associated with warming.

Pumpkin cumin and chilli soup
(served in its own pot)
For the one that came in from the cold.What I really love about this soup is its simplicity, both in its preparation and the conciseness of its ingredients.If you carefully slice off the top of the pumpkin and set it aside you can use it later as a lid for your pumpkin pot
1 large winter pumpkin weighing in at around 2 kg
2 tbsp butter or oil or combination of both,for frying
1 tbsp cumin seeds
2 medium onions finely chopped
1 or more red chillies(seeds and pith left in,if you like spice),cut into ribbons
12 tsp caster sugar
1 litre (approx)hot vegetable or chicken stock

Flor de sal
4 tsp roasted pumkin seed oil for drizzling
Peel the pumpkin with a sharp knife, cut it into segments about 2.5cm (1in thick ), and then into neat cubes.Using your hands pull out all the  the seeds and fibres and discard. Heat the butter and/or oil in the bottom of a heavy pot,then throw in the cumin seeds.Stir until they start to pop and release their aroma,then add the onion,stir well and reduce the heat Cook slowly,stirring ecery now and then,until the onion is very soft and transparent.Add the  chilli and sugar,and stir well.Introduce the pumpkin followed by the hot stock.Cook gently until the vegetables are soft ( about 1 hour).Allow to cool slightly and then blitz the soup in a processor. Drizzle with lashings of olive oil and enjoy the softer than satin orange velvety sensation.