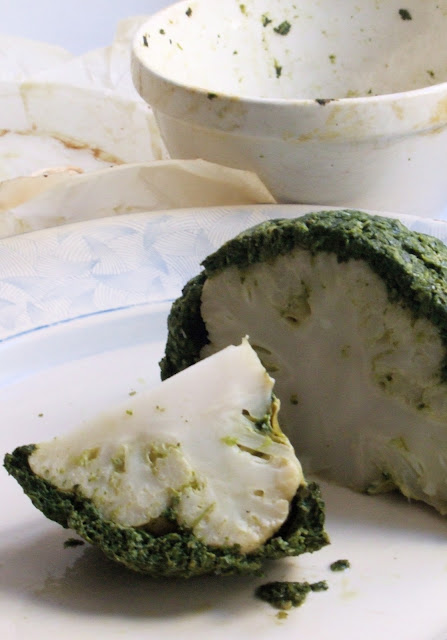 Choufleur, Couve flor or Cavolfiore.This is true in any language the cauliflower is really only a highly cutivated cabbage,but this does not mean to say that it can be the basis for some delicious dishes.
Okay, so cauliflower cheese is an English national institution,but that does not mean you have to cook it that way.My preference is for the obvious and simple applications of cauliflower- a good cauliflower cheese,a hugely simple,satisfying though not so simple feat.A lovely Moroccan cauliflower and almond soup blended but not strained to give it a wonderfully moussey texture.A French creamy sweet Cauliflower veloute.The Italian twist of adding cauliflower to a macaroni cheese or a Spanish cauliflower salad with Serrano ham and cherry tomatoes.The choices are endless and perhaps a good old aloo ghobhi might be just what the Indian doctor would  have ordered.
I have been meaning to cook this extremely unusual recipe for some time now.What in heavens name posessed me? I think it was the curiosity of seeing how it was going to turn out.I have no idea what the provenance of the dish is,other than  a tear sheet in my kitchen scrapbook.Perhaps I thought it was going to be more of an artwork than something that would grace my table.The recipe called it a rather elaborate starter ( not half). I was disappointed by the result but needless to say it is a wonderfully old fashioned recipe and gave me the chance re-kindle old memories by using one of my Grandmothers classic Mason Cash pudding basins,(seen in background of the picture).As classic and recognisable as the mixing bowls, no household would be complete without a nest of traditional white Mason Cash pudding basin.

Once the pudding mixture is poured into the basin it can be covered with greaseproof paper, muslin or cling film to form a lid. The rim around the top of the basin makes it ideal for retaining the ‘lid’ and therefore perfectly designed for any mixture requiring steaming. The rim also provides added grip when the basin is tipped to remove the pudding.Cauli gosh!! This is real old fashioned stuff.Buttering parchment paper and making lids for pudding basins by securing the paper round the rim of the bowl with kitchen string,and the main thing was that I really enjoyed myself.
Cauliflower and Spinach mousse
( a rather elaborate starter)
1 cauliflower
1 kg spinach
200ml double cream
2 eggs
4 egg yolks
Nutmeg

Pick and wash the spinach,drop it into plenty of boiling water then refresh it in cold water.
If you are pressed for time you could use a good quality brand of frozen spinach.( If using fresh )Drain, squeeze it dry  and chop.Put the spinach into a saucepan,cover with the cream,season with salt pepper and nutmeg and then reduce down until really thick.Blend, and set aside to cool a little.Beat the whole eggs and the egg yolks,and mix them well into the cooled spinach.Trim the leaves and stem from the cauliflower,taking care to keep it whole,then blanch it in salted boiling water until slightly al dente.Refresh it in cold water and drain.Butter the inside of a pudding basin that is slightly larger than the cauliflower, and place the cauliflower,stalk side up,inside.Pour in the spinach mousse,tapping the bowl so that it penetrates through the interstices of the cauliflower.Cover with buttered parchment paper.
Email Post