For me leftovers are just the beginning,it´s where creative cooking comes into its own.A peek in the fridge, I've got this and I've got that, so what can I rustle up? Like my mother before me I always make a point of using things up.I get a lot of pleasure from not throwing things away.Any remaining edible portions from a meal that is over, for me constitutes leftovers.Some leftover food can be eaten cold from the refrigerator, while others may be reheated, or mixed with additional ingredients and recooked to make a new dish. A classic example and one of my favourites is bubble and squeak.By the time I post this the whole world and his wife will have posted  a recipe for their own take on this,so I decided to shelve this post till everyone was sick of reading about bubble and screech.
Leftover problem?
Leftovers aren't a problem! They're a bounty.
SonOfTheDesert, guardian reader´s comment
2013 should be the dawn of a new age of thrift.I would love to see more magazines and cook books carrying intelligent original chapters and verses on left overs.Combing my bookshelves I found that many of my first cookbooks from the 1970s and 1980s always had chapters on using up leftovers.Delia Smith´s Classic Christmas book has a fantastic leftovers chapter that is one of my most well-thumbed at this time of year.
Something has changed everybody´s views on the subject. Left overs have become taboo. I think supermarket sell-by dates have a lot to answer for. People now look at the label on some bacon or cheese, and if it's a day over they'll throw the whole packet out instead of using some common sense and opening it up, tasting and smelling it.
What ever happened to "home economics." Good practical domestic advice being taught in schools. My mum would never throw out mashed potatoes – they would be made into Colcannon,fish cakes, potato scones or Irish potato cakes.The skill and initiative of cooking has disappeared One of the first skills of the cook is opening the fridge door, eyeing up what´s before you and thinking, what could I do with that?
As I wrote in my post on The 1st December, nothing ever gets wasted in our house.Like my mother, Nigel Slater almost has a fetish for using up scrapings and remnants. He writes about that sort of thing as a matter of course.However he now is also an exponent of using up every morsel while you are prepping,therefore bumping waste on the head before you even sit down to eat.Not everything, or everyone for that matter, is partial to a good warming through (so to speak).They say opposites attract,well my poor partner the thespian, God help him, has had to put up with 18 years of my leftover creations, some good and some bad I admit it myself, but he is never happy when I put a midweek leftover supper on the table.Lets face it, most households ended up with some sort of carcass on New Years day, and the previous Tuesday also. From this remaining meat I was able to rescue enough resources to provide delicious sandwiches with attendant pickles and the makings of another light meal and a TV dinner.The stuffing and the left over breadcrumbs all became the makings of a more than tasty migas. Having stripped the carcass bare, it was then ready to be boiled down to make stock that made wonderful curried parsnip soup for later in the week, and there was even enough stock left to freeze some.The remaining meat formed the basis of a midweek lunch of Duck Rice for friends.Now guess what? I found myself with leftovers from the left over Duck rice. I knocked up some Arancini for another supper.With leftovers the possibilities are endless. 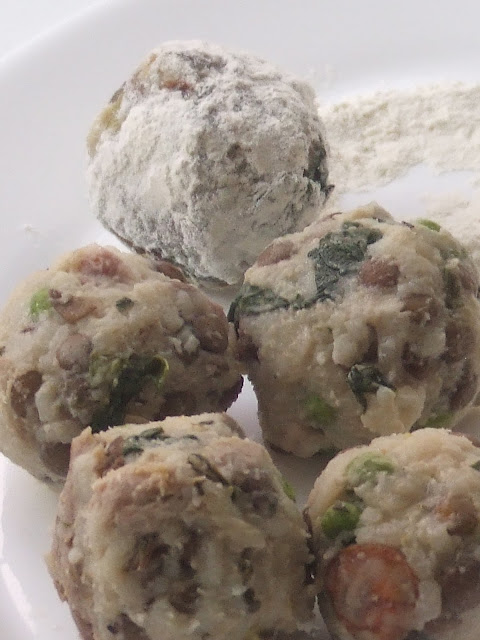 Todays lunch is all tomorrows dinners

These typically Sicilian snacks are a great way of using up leftover risotto.Traditionally they are filled with different stuffings,such as minced meat or vegetables.
Arancini di Riso
1 quantity of left over risotto
plain flour for dusting
2 eggs beaten
breadcrumbs for coating
sunflower oil for deep frying


Take a little of the risotto and form it into a ball, roughly the same size as a golf ball.You will find it easier if you wet your hands with cold water. Dust with a little flour,then coat with beaten egg and finally coat in the breadcrumbs.Repeat the process for each ball.
Heat some oil in a large deep saucepan or in a deep fat fryer.Add the risotto balls a few at a time and fry for 2-3 minutes until golden brown.Drain on kitchen paper and serve hot or cold.

A good New Years resolution
With millions of people in Europe now unable to afford the food they have been used to eating and global food prices set to rise as climate and other pressures increase, tackling food waste in the kitchen is at least a very good place to start.We are all guilty at some time or another of over shopping or impulse buying,but then there is always a recipe for that lost soul that is in the vegetable box or sitting on the fridge shelf.Think about it.Ready meals are not as wholesome or as cheap as they are made out to be.
Email Post