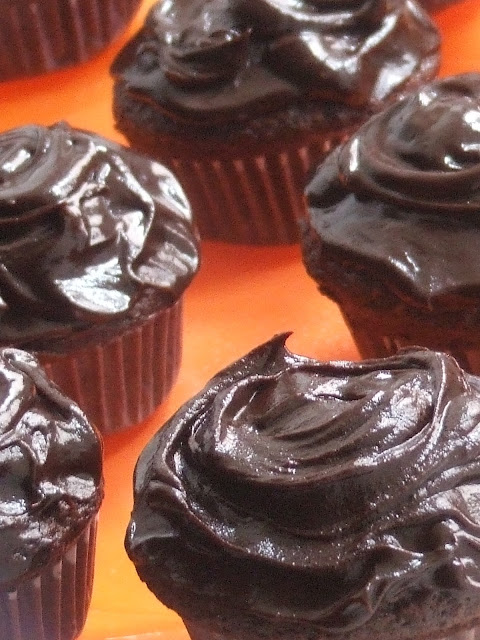 This is the closest thing to nemesis I have ever known.The definition of nemesis being "a source of harm or ruin" or "an opponent that cannot be beaten or overcome". A cold, cold  Sunday afternoon in the East Algarve and a cake is always prerequisite."Ottolenghi the cookbook" to the rescue. Does one need an excuse for self indulgent chocolate cake? Well, just to ease my conscience, there is an occasion coming up.One bright young lady we know, Carolene.Its going to be her thirteenth birthday and what better way to enter adolescence than with a grown up chocolate cup cake topped with an Amarguinha chocolate ganache. And what better than at this time of the year, when the Algarve is covered with a dream-like white almond blossom,signifying Spring is on its way.
Amarguinha is a Portuguese liqueur made from the best almonds available in the Algarve,the "amendoa amarga" (bitter almond). The original brand of "amarguinha" was created by Filipe de Brito, Portuguese mercenary and governor of Syriam, Burma, in 1602.So good is this liqueur that Portuguese bartenders sometimes use Amarguinha as a substitute for orgeat syrup. Samuel Pepys, the famous 17th Century diarist and a great imbiber, loved (amava seu bebida) Amarguinha chilled and mixed with half a lemon and a good dose of Turkish coffee.
Pale yellow in colour with an intensely aromatic nose of spiced almonds, hints of citrus fruit, and in a strange but cool way, bear claw pastries. Its rich syrup- like full body, and lack of acidity is why the Portuguese usually add a squeeze of lemon. Amarguinha is typically served as a digestif or night cap, as it is known by the Portuguese to have some positive medicinal properties. Also great served with espresso, almond biscotti, fresh fruit or in any number of imaginative cocktails.At the end of the meal a shot of Amarguinha, like a spoonful of sugar, helps the meal go down,leaving a distinct haze of almondy sweetness on your tongue.

Amarguinha Chocolate cup cakes
Makes 12 cup cakes
(adapted from a yotam ottolenghi original)
I have been so disciplined with my New Years resolution of austerity measures in the kitchen that I thought I would have respite Sunday and throw caution to the
wind and bake.Every extravagant ingredient known to man seems to have gone into these cup cakes but what the heck, the following day it would be back to frugal midweek suppers and feasts for a fiver.A mark, a yen, a buck, or a pound -  bearly makes a meal go round.
2 free range eggs
150ml creme fraiche
80ml sunflower oil
20 ml golden syrup
20g unsalted butter melted
60g caster sugar
60g light muscovado sugar
120g plain flour
35g cocoa powder
1tsp baking powder
1/2 tsp bicarb onate of soda
1/4 tsp Flor de sal
40g ground blanched almonds
200g dark chocolate,cut into small chunks

FOR THE ICING
165g dark chocolate cut into small pieces
135ml whipping cream
35g unsalted butter diced
1 Tbsp Amarguinha,Amaretto or other almond liqueur
Heat the oven to 170C/Gas mark 3.Line a muffin tray with 12 paper cases.
Whisk together the first 7 ingredients in a large mixing bowl until they are just combined.Don´t over mix.Sift together the flour,cocoa,baking powder and bicarbonate of soda.Add them to the wet mix, along with the salt and almonds, and fold together gently.Fold in the chocolate pieces.
Spoon the batter into the cupcake cases,filling them up completely.bake for about 20-25 minutes;if you insert a skewer in one,it should come out with quite a bit of crumb attached.Remove from the oven and leave to cool,then take the cup cakes out of the tray.
While the cup cakes are baking,start making the icing.It will take time to set and become spreadable.
Place the chocolate in a heatproof bowl.Put the cream in a small saucepan and heat almost to boiling point,then pour it over the chocolate using a rubber spatula to stir until all the chocolate has melted and come together with the cream.Add the butter and liqueur and beat until smooth.
Transfer the icing to a clean bowl and cover with cling film.Leave at room temperature until the cup cakes have cooled completely and the icing has started to set.You need to catch it at the point where it spreads easily but isn´t hard.DO NOT speed things up by refrigerating.
Spoon a generous amount on top of each cup cake and swirl with a palette knife.Apply carefully to face and savour the divinely decadent experience.
Email Post