Jorge and the giant pumpkin 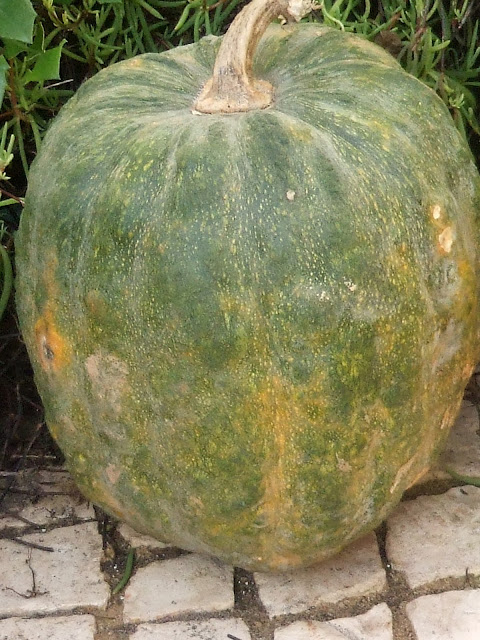 We all know the story of James and the giant peach, occasionally macabre and potentially frightening in some of its content.Throughout his adventure James was nonetheless clever, ever-resourceful and intuitive with his plans concerning the giant peach. I intend to be equally resourceful and intuitive with the giant legume that was recently bestowed on us.
Every winter our friend Jorge gives us a large punpkin from his brother´s farm. I look forward to this gift each year and the challenge of finding enough recipes resourceful enough to use up every part of this giant Portuguese pumpkin.What with all the season´s comings and goings I haven´t had time to tackle the task in hand.This is lucky because these squash type legumes have a good shelf life while left uncut.As soon as a knife is taken to them everything changes and one has to move fast.
Pumpkin jam is my first priority.Always popular on the Casa Rosada breakfast table, a batch of this, stocking up the larder shelf, will be more than a reward when it comes to the arrival of the season´s first guests, if I myself have not slathered it over my own toast in the coming weeks.

Doce de abobora
( Pumpkin Jam)
This is an excellent jam, very useful for filling tarts and cakes or simply on its own as a dessert, with creme fraiche cut through it and topped with toasted almonds.Just one word of warning before you get started - according to how much cinnamon you add at the end the glorious colour of this jam will darken.
1lb (450g) cooked pumpkin
1lb (450g ) granulated sugar
(The Portuguese prefer their sweet things, very sweet, I used half this amount)
Cinnamon to taste


Peel and clean the pumpkin and cook in water until tender, adding just a pinch of salt. Place it in a sieve to drain it as much as possible while pressing it lightly to extract the liquid trapped inside.Blitz in processor until you have a very smooth puree. Mix with the sugar and boil, stirring with a wooden spoon until it thickens. Remove from the heat and stir in the cinnamon. Pour into a sterilized jar and keep in the fridge.Look forward to spreading this on some toast for your breakfast.


Next up tomorrow a steaming bowl of creamy pumpkin soup with Chilli and cumin,served in its own bowl drizzled with extra virgin oil.The perfect meal to serve up at this time of year.It warms both body and soul.Be sure to check it out.
Email Post