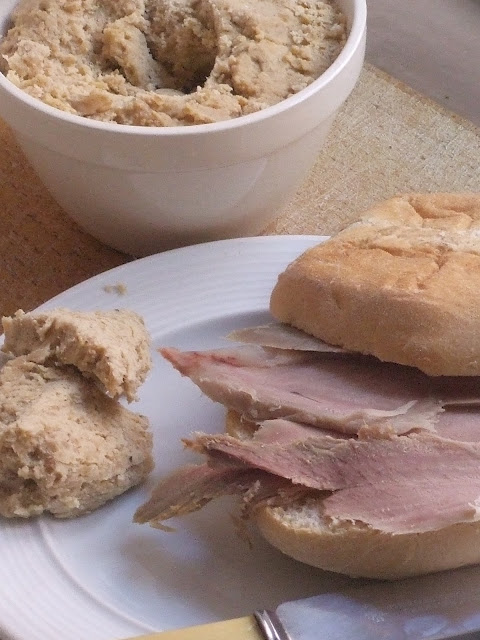 Almost every family has a treasured recipe,no more so than here in Portugal, beloved as much for the memories it evokes of family get-togethers or a special family member, as it is for its taste. Most families have many such recipes, handed down through generations, taught to children, or squirreled away on index cards or scraps of paper.
Some of the dishes our mothers made came from old recipes, but most were from memory. They seemed to know just how to make a meal, and it always turned out perfect,and how annoying was that.This is kind of the way I myself cook.Having cooked a recipe once I abandon it and cook it more intuitively, but  often it turns out less than perfect,and thats what they call the learning curve.
When I think of my mother cooking  there is a dish that is always still in my mind, and believe it or not, I still can remember the taste.It is my favourite comfort dish, (not that I get the chance to make it that often living in Portugal ) extremely tasty and filling,and both easy and quick to prepare.Part of its comfort factor for me comes from the memories I associate with it; the sense of taste is closely linked to the sense of smell,and related more strongly to memory than visual stimulus or flashback.Yesterday when I was making it,the cold north wind was rattling the shutters but indoors I was inhaling the warm scent of the marrow fat split peas cooking down in a pork broth,it brought it all rushing back to me and transported me to the security and warmth of my dear mother´s kitchen in the 50´s.
That was a long time ago when I was still a very young boy. She often used to cook this dish, called pease pudding.It's been eaten in Britain for centuries.In the past the British preference was for 'pease' over  pulses. (Mediterranean puy lentil pudding hot, Mediterranean puy lentil pudding cold, just doesn't have the same ring about it somehow.)  It was traditionally eaten with bacon or ham, and still is.The salt of the bacon, ham or gammon offsets the blandness of the pease pudding nicely. The 'Pudding' part of the name comes from the fact that it was cooked in a cloth in the same pot as the meat,or cooked in a pudding basin.
It is a purée of boiled split peas,more usually the yellow variety.This may sound like quite a retro kind of dish,and there is nothing wrong with retro -when the cooking budget gets tough  the tough cook retro. I'm sure many people have forgotten this delightfully unfashionable delicacy – or never even tasted  dried marrowfat peas with their mealy texture and concentrated flavour.You just add boiled bacon, cured gammon or home cured ham and enclose them in a floury bap(stottie). I found these bouncy Portuguese baps and the combination of the whole was utterly sublime....and the good news is –that after boiling the bacon you can reserve and freeze the stock to make a another recipe called The London Particular.(split pea soup)
By adding some Portuguese clams to my pea souper I have found I can make something even more delicious not far removed from a chowder.More of that story later.
My mothers (ap)pease pudding
In an attempt to appease the god of split peas, I used up the remains of a rescued packet of split peas  (that is why I call it Appease Pudding?)
In my mothers time,pease pudding would have been tied into a muslin pochette and cooked in with the boiling meat,in her case usually salt pork or bacon.Left overs were, and still are I believe. fried and eaten another day.I finished it off by steaming it in a pudding basin.

Nowadays many dried vegetables do not need soaking before they are cooked,so much has the quality been improved.If however they have been on your shelf for a few months I would advise to allow them an overnight soak adding 1 level teaspoon of bicarbonate of soda to your water if its hard.
To cook the peas,drain them if they have been soaked,then put them in a pan.Cover them with plenty of water ( I used home made ham stock for a more intense flavour )and simmer until tender.Split peas should take from 45 to 60 minutes depending on their age.Whole dried peas will need at least 2 hours,Drain off all the liquid and save it for soup.Put the peas in the blender and pulse to a not too smooth purée.Mix in the butter,then the egg and season well.Put the mixture into a buttered pudding basin and steam for an hour.Turn it out and serve it with boiled smoked bacon or gammon.My preference however is is in the pot one day old cold and then slathered on a sandwich with ham or bacon.
The verdict: tastewise I recreated my childhood favourite,it was perfect but my only criticism was that the texture was a little on the dry side and this was caused by steaming the pudding for too long.The difference  being my mother always used a pressure cooker and I used a bain marie.
Email Post