A load of cobblers 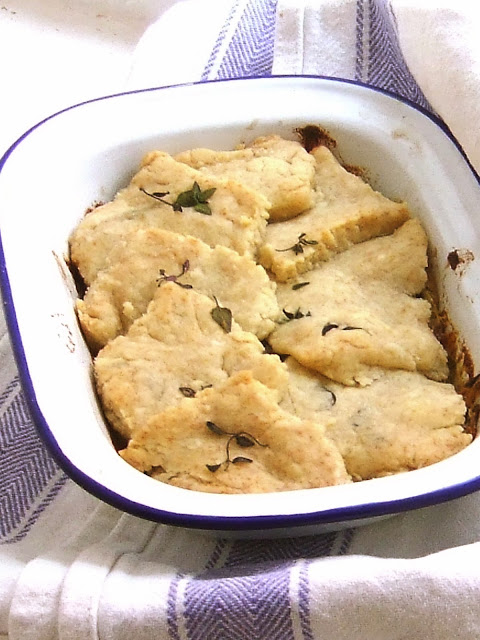 Leek and ham pie with a cobbled topping

Pies are a key part of Britain’s history – just think of all the references to pies in the nursery rhymes of our childhood. Simple Simon, met a pieman, going to the fair. And Tom, Tom the piper’s son,who stole a pig and away he ran. The ‘pig’ that he stole was actually a sweetmeat pie from a street trader. So, whether it’s a sweet pie, a savoury pie, or a four-and-twenty-blackbirds-baked-into-a-pie, the British are pie crazy people.
The cobbler has not hit the streets or malls of London or Lisbon yet but I don´t see why it shouldn´t.I am talking about my Portuguese make over on a British /American colonial dish from back when.A commercial hybrid could be something right up the pieman´s (aka Andy Bates) street. Pies are sold worldwide as street food at football matches and other major events.Portugal is proud of their rissois, pasteis and empadas,and so they should be, they are delicious.And while Portugal struggles under the yoke of recession its residents are becoming more resourceful at making their dinheiro go a little bit further.Trends are showing a return to the lunchbox, a move towards opting for inexpensive takeaways in place of the traditional sit down affair.Restauranteurs have been observing and listening and are now adjusting accordingly.Top quality traditional Portuguese pot pies are now jumping into boxes off the counters of Empadaria do Chef ,not only in Portugal but now in Madeira and Brazil.A concept originally  pioneered by Michelin starred Portuguese chef José Avillez,with experience under Alain Ducasse and Ferran Adrià, these pies are not to be sniffed at. So what about my simple pieman´s trans european make over?
I made the filling for a classic ham and leek pie and then paved the top with a decking of calçadas.Traditionally this would have been called a cobbler.
Cobblers originated in the early British American colonies. English settlers were unable to make their favoured traditional suet puddings due to lack of suitable ingredients and cooking equipment, so instead covered a stewed filling,either savoury or sweet, with a layer of uncooked plain biscuits or dumplings, nestled together. When fully cooked, the surface has the appearance of Portuguese calçadas or, if in England, a cobbled street.The name may also derive from the fact that the ingredients are "cobbled" together.
Cobblers and crumbles were also promoted by the English Ministry of Food during the Second World War since they were perfect ration food, using less butter than a traditional pastry and could be made with margarine.For my cobbler crust I used neither, but instead,flour,creme fraiche and olive oil.How healthy and low calorie is that and, surprise surprise, it tasted fantastic.
My mother used to make a good old cobbler, so continuing my new year culinary programme of austerity I had to make her be proud of what I literally cobbled together.I know for sure the fact that it involved leftovers is enough to make her smile down on me.
This is a lovely warming dish that is perfect for a cold January evening.It also conveniently uses up that leftover chunk of ham from Christmas.This warming cobbler is impossible to resist, but is so delicious that eaten once it then paves the way for cooking it up all year round.

Heat oven to 200C/fan 180C/gas 6. Heat ½ tbsp oil in a large pan, then fry the leeks, stirring for 5 mins until starting to soften. Add the stock, then simmer for 5 mins.
Meanwhile, tip the flour into a bowl, make a well in the centre, then add the yogurt, remaining oil, thyme leaves and a little salt. Using a cutlery knife, mix to bring together to a soft dough. Divide into 4 and shape into rounds on a floured surface.
Stir the peas, ham and grated apple into the leeks, then divide between 4 individual pie dishes or one large dish. Top each with a round of dough,or alternatively make one large rectangular pie and carpet it with your pastry paving.Scatter with more thyme, then bake for 20 minutes until golden..

Also stepping out on the tiles....