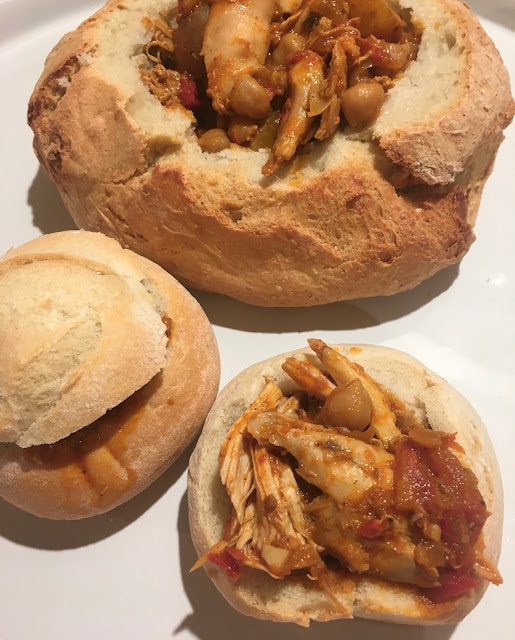 South African bunny chow (recipe below)
The next time you order your favourite curry, you might well be surprised to know that you’re not just satiating a craving—you’re tasting a bit of ancient culinary history. Interestingly, there is no such word as ‘curry’ in any of India’s many languages. So what exactly is ‘curry’? And when and where did it originate? As for the origins of the word ‘curry’, it remains disputed. In his book, The Oxford Companion to Food, historian Alan Davidson credits it to the Tamil word kari, “or spiced sauce, which was originally a thin, soup-like, spiced dressing served in southern India” On the other hand, food historian Lizzie Collingham traces it to Portuguese-ruled Goa of the early 1500s. In her book Curry: A Tale of Cooks and Conquerors, Collingham explains that the words kari or caril likely referred to “a spiced dish of sautéed vegetables and meat.”. In fact, there is a recipe for kari in a 16th-century Portuguese cookbook on royal banquets written by maritime traders.

A 16th-century Dutch traveller, Jan Huyghen van Linschoten, also described the way caril was eaten in Goa. He wrote: “Most of their fish is eaten with rice, which they seeth in broth, which they put upon the rice, and is somewhat sour as if it were sodden in gooseberries or unripe grapes, but it tasteth well, and is called Carriel, which is their daily meat.”

Another 17th-century traveller, Pietro Della Valle from Rome, described caril in his accounts as broths “made with butter, the pulp of Indian nuts . . . and all sorts of spices, particularly cardamom and ginger . . . besides herbs, fruits and a thousand other condiments . . . poured in good quantity . . . upon boiled rice.”

So it was probably the Portuguese who set the ball rolling by introducing the word caril to the world. Interestingly, prawn curry is still called ‘Caril de Camarao’ in some places in Goa. Meanwhile, back in India, the kari continued to evolve into a plethora of extremely regional variations. Persian influence led to the addition of yoghurt in meat gravies, cream and pureed nuts were added in Lucknow to produce decadent kormas, and chillies from South America (introduced by the Portuguese) gradually found their way into south Indian curries—it goes without saying that our forerunners took to this new seasoning with immense gusto. But how did this huge range of dishes end up being lumped together under one moniker? For that, we have to look to the British and their colonising mission.
Wherever the British went, taking with them bureaucrats, soldiers, clerks, cooks, indentured labourers, and other cogs in the wheels of the Raj, so did the local curries of India, ( like the Railway Mutton Curry, a British Raj colonial-era dish that was served on long distance trains. The dish was served with dinner rolls.). But with typical insensitivity and willful ignorance, they replaced the varied recipes and diverse eating cultures with a homogenous notion of an Indian ‘curry’.
In 1747, Hannah Glasse published the first curry recipe in English under the title of ‘To Make a Currey The Indian Way’. By the late 19th century, commercial curry powder was being widely sold in England, even though it had little resemblance to anything being used in India. In fact, Indians rarely depended on a single powder to make their versions of the dish, instead relying on a melange of spices specific to the recipe. 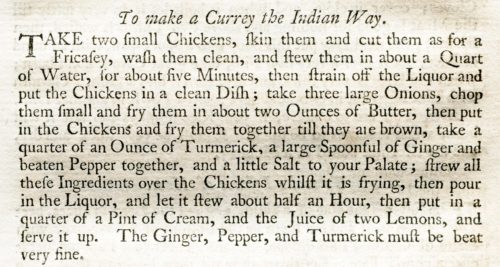 Indians who rose to prominence in the international culinary arena would later go on to denounce this reduction of their country’s rich cuisine to store-bought mixes.
“What you don’t need is curry powder,” wrote Madhur Jaffrey, the doyen of Indian cooking in America, in 1974, in her book An Invitation to Indian Cookery. She added that “no Indian ever uses curry powder,” nor would they mix their own, since then every dish would taste the same. 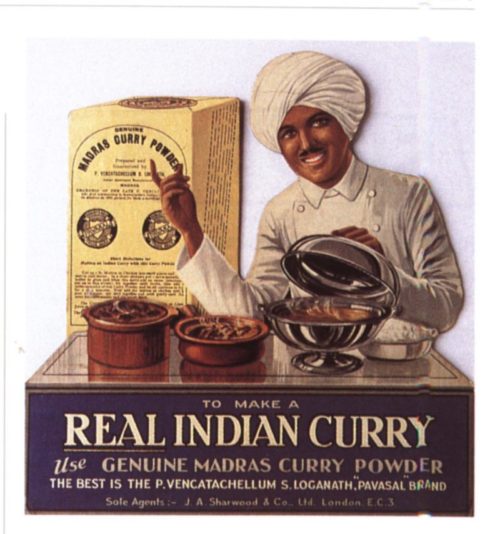 However, there is also a different legacy of this culinary intermingling, courtesy of Indians who migrated to England and sister colonies. In lands far away from India (South Africa, Guyana, Maldives, Fiji, Japan, Trinidad, Mauritius, Suriname etc.), Indian immigrants used local ingredients to create the closest approximation of the loved and remembered curries from ‘back home’.
Ever since, these reclaimed and reinvented curries have continued to conquer all, wherever they have settled. Like the Indian diaspora itself, they are true to their origins yet creative, full of surprising flavours and depths, and yes, infinitely adaptable.
Take, for instance, South Africa’s Bunny Chow. Essentially a piping hot Indian-style curry housed inside a hollow loaf of bread, Durban’s bunny chow is a much-loved street snack in South Africa. In fact, according to the Johannesburg Times it has become an “integral part of South Africa’s culinary heritage.”
This is where I think the story becomes really interesting because I feel there is a strong connection between bunny chow and the Portuguese açorda.The only difference being that the Portuguese version is devoid of spice and the pap removed from the inside of the loaf is returned to the cooking to form a thickening agent or porridge. Why has this connection never been cited I wonder? 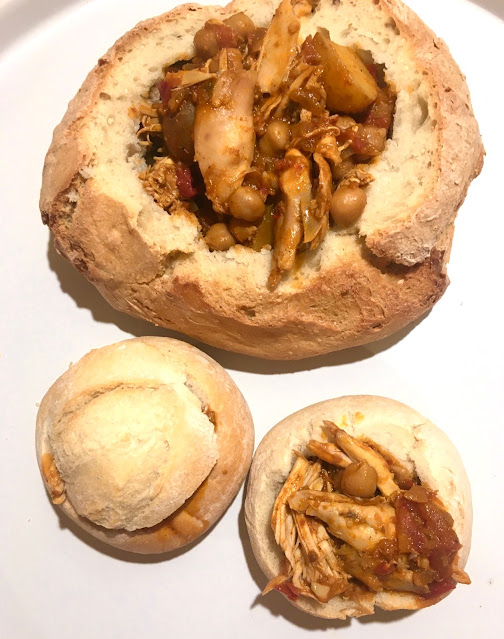 Bunny Chow
The first thing you’ll notice about the South African dish Bunny Chow  is that no rabbits were harmed in its preparation. The second thing is that it’s incredibly portable, a curry lover’s answer to a lunch box. And the third thing you won’t really notice at all, but it’s what makes Bunny Chow so interesting: that it's a dish mired in legend, its origins a murky tribute to a South Africa’s past. Bunny Chow originated in Durban’s Indian community during the apartheid area. It was actually a product of racial segregation, in this case “Apartheid”, which not only affected the Africans in South Africa, but also the South African Indians (Bania Malayan Indians)  who worked there. They were not allowed to eat in the restaurants, so they had to find something that could be ordered from the sides or backdoors of restaurants. It had to be mobile, something which they could eat somewhere outside, The most popular dish at the time was roti and beans, but roti, a thin wheat bread akin to a crepe, fell apart easily if not eaten immediately. Indian proprietors began using loaves of bread (usually rectangular like pan loaves) as take-out containers for curries and so the “Bunny Chow” -- South Africa’s most popular fast food -- was born. They had to cook for all the workers so the Africans got the same treatment. The invention of the recipe itself was also from the Indian community. As Indians traditionally ate with their hands, it was done by hollowing out the bread and then served with the curry bowl being the hollowed out loaf– the curry was very thick, even a bit thicker than in the pictures here – the stuff had to stick on the meat, and everything else should be not much more than that to be able to soak into the bread.So eating with hands it was, and that is how the “Bunny Chow” -- South Africa’s most popular fast food -- was born.
1 pound chicken thighs or breast cut in bite-sized pieces
1/2 cup canola or cooking oil
2-3 Curry leaves
1 teaspoons minced ginger
2 teaspoons minced garlic
1 Tablespoon curry powder or more
1 medium onion diced
2 medium tomatoes diced
1 cinnamon stick
1 1/2 teaspoon paprika
3 green cardamom pods lightly crushed
8 ounce or less potatoes cleaned and cut into cubes
1 15 ounce can chickpeas rinsed and drained
½ teaspoon cayenne pepper optional
11/2 cup or more chicken broth or water
Salt and pepper to taste
When ready to cook, heat up large Sauce- pan with oil, and add onions, garlic,ginger, cinnamon stick, curry leaves, cardamom pods and curry powder, stir occasionally for about 2-3 minutes until onions is translucent.
Add tomatoes followed by chicken, stir and sauté for about 2-3 more minutes. Add chicken stock/ water if necessary to prevent any burns
Next add chickpeas, potatoes and chicken broth , about 1 1 1/2 cup , add more as needed. Bring to a boil and let it simmer until sauce thickens, it might take about 25 minutes or more
Adjust for salt, pepper and stew consistency.
Email Post