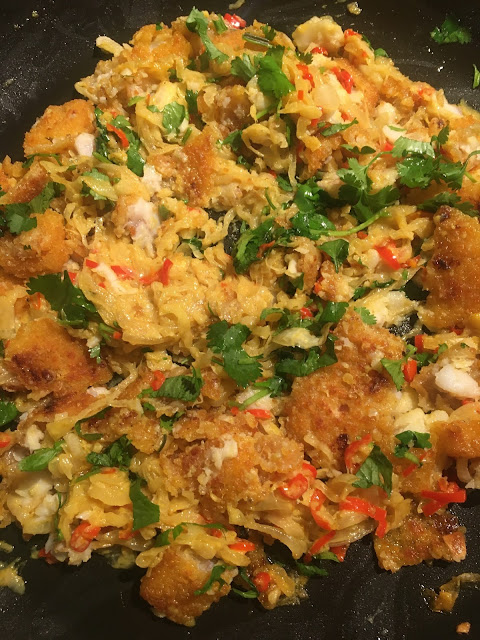 The culinary blogosphere is made up of a network of food bloggers. We exist together and  interconnect as a community (or as a collection of online connected communities of people who love food ).
These blogs allow foodies and aspiring chefs to share recipes, cooking techniques, and food porn, by that I mean a glamourized visual and written presentation of cooking or eating, for others to enjoy; food photography with creative styling that presents food provocatively, in a similar way that glamour photography would. Food blogs such as Serious Eats, Leite´s Culinaria,The Spruce Eats, Food 52, David Lebowitz, Smitten Kitchen, Kitchn, and Simply Recipes serve as a sort of online cookbook for followers, often containing restaurant critiques, product reviews, and step-by-step photography for
recipes. With its outstanding growth within the past decade, the culinary blogosphere has developed as its own network of interconnections.Bloggers have begun to engage and share in other online communities, specifically social networking sites, melding the two realms of social media together.The culinary blogosphere is kept alive by a constant flow of tweeted and face book posted recipes.We borrow, we pinch ideas, we reinvent but always give credit where credit is due. Out of this recipes develop and new ones evolve. What follows is a prime example of how this works. Just three minutes into her new TV series, Nigella Lawson started preparing her first dish, a Fish Finger Bhorta. There is an entire category of Bengali dishes, the preparation of which involves boiling/steaming vegetables, leafy greens, and even certain kinds of fish, and then mashing them by hand with some sharp flavours derived perhaps from onions, garlic and chillies. This category is called the ‘bhorta’, and is admittedly more popular within the Bangladeshi branches of Bengali cooking than it is within the West Bengal ones. The mode of preparation is so simplistic—requiring only a handful of basic, affordable ingredients, and very little effort—that every cuisine has its take on the bhorta in some form or another (the Bihari aloo chokha,(mashed potatoes combined with green chilies, onions and coriander ) Bengali aloo sheddho or aloo bhaate, and the North Indian aloo/baingan/chicken bharta (Indian Potato-Aubergine Mash) come to mind). 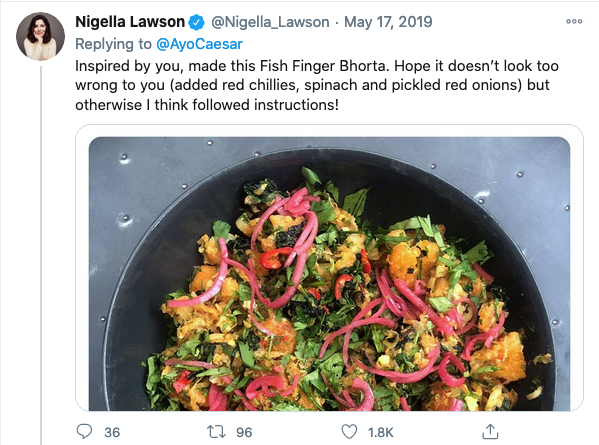 Nigella told us it was inspired by a tweet from everybody’s favourite leftwing activist of Bangladeshi heritage, Ash Sarkar. Fish finger bhorta is to Sarkar "what a madeleine was to Proust". Bhorta involves a base of onion  traditionally cooked in mustard oil, which is illegal to buy in Eu and USA (Nigella uses a first-press rapeseed oil in its place), chilli, garlic, ginger and possibly, a little wilted spinach ( Nigella embellishment ), plus some mashed ingredient, normally potatoes but in this case fish fingers. Not the posh ones, counselled Nigella as she squashed them with a spatula, since they have too high a ratio of fish to breadcrumbs. Mix the bhorta and fingers together in a pan, decorate with pickled red onion ( Nigella embellishment ) and ready yourself for a vicarious Proustian rush with a twist. Well we are one of many households who bought into this. I know I profess on this blog to cooking fine restaurant class dishes, but there is always a place in my heart that yearns for comfort food.,especially a fish finger. The Thespian and I love our fish fingers and especially a fish finger sandwich,so this was right up our street,and we were so excited at the prospect of a new take on the fish finger sandwich. We too were "going in", Nigella. The dish originally had caused a flutter of feathers when it was tweeted back in April 2019. Nigella was in there citing she had made it and admitted to adding her own embellishments. Amongst the flutter of feathers coming off this one tweet I found a reply that led me to Birdseye´s own website, here I found the inspiration of how I would serve my Bhorta. A fish finger naanwich? No I was going to make fish finger Bhorta chapati rolls

Our verdict: one of disappointment.Our initial excitement had been dampened somewhat.The taste was sour and overtly mustardy. Ash Sarkar´s original tweet of the recipe was this....Nostalgia in a dish: cooked fish fingers, mashed with onion, fresh ginger, and green chilli that’s all fried in mustard oil, stirred through with a bit of English mustard and finished with lemon and coriander. Bird’s Eye bhorta is to me what a tea-dipped madeleine was to Proust. Well I think Nigella went a little overboard in her version. A little bit of English mustard became 2 tablespoons. Mustard oil ,which is unavialable, became cold pressed rapeseed oil. I wonder if these innovations are what soured the overall taste. We will definitely try it once more but perhaps being more true to a  fish finger sandwich which has to include ketchup.I am now thinking ketchup and a sweet chilli jam might be the order of the day? Further research into authentic Bangladeshi bhortas revealed the word sour was mentioned quite frequently, so maybe sour it is but not for the Thespian and I.In hindsight Nigella´s inclusion of spinach might well have taken the edge off it and worked as a foil for the mustard....... and so the recipes of the bologosphere continue to evolve.
My chapati idea worked beautifully as a serving receptacle.
Here is the recipe.( taken from Dishoom ). 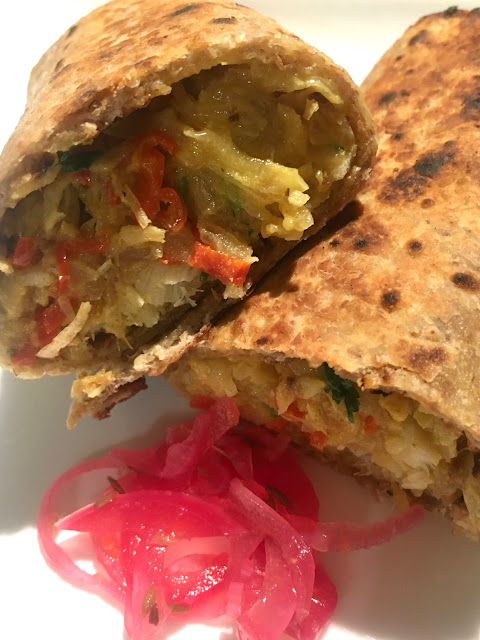 Sift the flours and salt into a large bowl.Mix in the sugar and make a well in the centre. Combine the milk, egg, oil and 120ml water in a jug and whisk with a fork to combine. Pour into the well of the flour mixture and gradually draw in the flour with a round-bladed knife, then knead with your hands for 8 minutes to create a soft dough.Cover with a clean damp cloth and leave to rest for 30 minutes.When the resting time is up,knead the chapati dough for a further two minutes,then weigh into 5 equal portions and roll each into a neat ball.

Have ready a clean slightly damp clean tea towel to wrap thechapatis in once cooked and keep them warm and soft.Place a large frying pan or even better a cast iron skillet over a high heat.On a floured board,roll out a dough ball as thinly as you can, to a 1-2mm thick round.Place the chaapati in the pan and cook for about 1 minute on each side,roll up into a cylinder and wrap in the tea towel.Repeat to cook the remaining chapatis.

To assemble take a chapati  and lay it flat on a clean surface.Arrange the bhorta filling in a neat rectangle in the centre of the chapati,To roll,folding the chapati tightly in half,fold both ends in,then roll tightly into a log shape much as you would a wrap,Set aside and  repeat with the rest of the chapati rolls.

To finish place the frying pan back on a high heat and brush the rolls all over with melted butter.You should be able to fry two at a time.add to the hot pan and sear for 30 seconds till golden,then turn and sear for a further 30 seconds.