What is it about brandy snaps that have positioned them so high up the league in the Christmas culinary tradition? Absent are the seasonal dried fruits and nuts of other yuletide stalwarts, those cakes and puddings that require festive forethought and stir ups months in advance. But whatever the reason, I can’t imagine making or eating brandy snaps at any other time of the year. Their ingredient list is minimal and their spicing is almost left to the imagination. A brandy snap´s shelf life is as transient as a broad bean in the Spring. To those not familiar,  they are both an unusual and a simple recipe: equal parts butter, sugar, syrup and flour are melted together to form a biscuit dough which feels simultaneously too loose and too firm all at the same time. This is dolloped out onto parchment lined baking trays and cooked for just ten minutes until it has spread and bubbled into hot little sweet-smelling doilies.As you throw caution to the wind, and lift a soggy new born snap, you are convinced that it will fall apart before you can get it onto a form, it will drape slouchily around your greased wooden spoon or dariole mould. Hold it tight in the shape that you want, and mere seconds later, before you can sutter the words baby Jesus you have a fragile tube of slightly spiced biscuit. While brandy snaps appear similar to their Italian cousin the cannoli, they are much easier to make, requiring a biscuit batter rather than a dough, and are baked flat rather than deep fried in their final shape. Their compulsive caramelised crunch, quaint shape, and ability to hold vast quantities of whipped cream are all to their credit – but equally, the ease and simplicity of making them is not to be sniffed at during this oh so busy time of the year.
Brandy in our house is rarely used other than in the lead up to Christmas, when I get to slosh it at least once a week into every cake and bake that stands still for long enough to accept it – but the brandy in the name is misleading. Traditionally, there is no brandy in the recipe at all, rather the ‘brandy’ in the name is thought to be a bastardisation of ‘branded’ meaning ‘burnt’, referring to the caramelisation of the biscuit as it bakes. So, really, the biscuit is all snap and no brandy. But that snap is the key: a brandy snap should be sugar-brittle, and audibly crunchy – never soft, never soggy. Despite the misnomer, I might just this once dab a little brandy into my cream filling to create just the right amount of a hedonistic hit.
There are two ways you can go with a brandy snap, you can either mould the mixture around wooden spoons to make the classic cigar shape, or alternatively place it over a small pudding mould or satsuma to make little baskets. I kept my options open and went for both. Either way, brandy snaps were made to be filled with softly whipped cream – for festive cheer, I make an Italianate zucotto type filling with heavy whipped cream, chocolate nibs lifted with a little citrusy zest and the aforementioned splash of alcohol, which I decided was not brandy but home made orange licore. With some chopped orange zest or crystallized fruit the filling holds its own weight beautifully. The biscuits will retain their snap surprisingly well for a few days if unfilled and kept in an airtight container – once they’ve come within sniffing distance of cream, however, they will begin to soften, so don’t fill them until just before you’re ready to
serve.
Should you need to you can prolong their lives a little by dipping part of the unfilled shells into melted chocolate and letting it harden – or dip the filled ends into crushed pistachios or finely chopped candied peel for an even more Christmassy look. 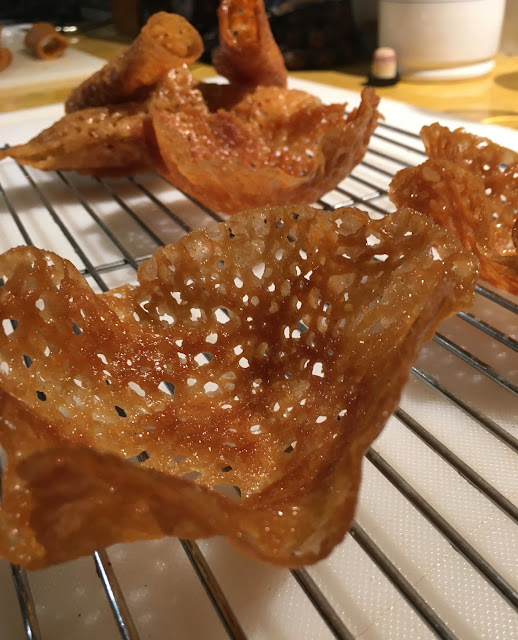 Preheat the oven to 180°C and line a baking tray with baking parchment.

Melt the butter, sugar and golden syrup together in a small pan over a low heat. Once melted, fold in the flour and ground ginger. Spoon teaspoons of the mixture onto your prepared tray, well-spaced apart, as the brandy snaps will spread – no more than 4-6 per large baking tray. Bake for 10-12 minutes. Don’t try and cook two trays’ worth of biscuits at the same time, as you won’t have enough time to shape them all before they cool and harden.

When the snaps come out of the oven, they should be a dark golden brown. Set the tray in front of you for three minutes (no more!), and ready yourself with a wooden spoon or a small pudding mould or satsuma. Rub a little vegetable oil onto the wooden spoon or upturned pudding mould (the satsuma won’t need it). Lift a biscuit from the tray, helped by a small palette knife or similar, and immediately wrap it around your greased mould; if you’re using a wooden spoon, make sure that the two sides of the biscuit overlap and are pressed together. Hold and count to fifteen. Carefully slide the biscuit off the mould, and set to one side, allow to cool completely.

Repeat with the remaining cooked biscuits, and then repeat the whole process with the remaining uncooked batter. If the biscuits harden too much before you are able to mould them, you can rewarm them briefly in the oven to bring back their pliability.

When you’re ready to serve the brandy snaps, zest a clementine into the cream, and add the brandy and vanilla paste. Whisk the cream until it is thick and holds its own weight when you lift your whisk away. Transfer the cream to a piping bag and pop the end of the piping bag into your cooled brandy snap; pipe until the cream reaches the other end, and serve immediately.