Santos Shah, a genuine highlight of 2020

"When the world is in turmoil, when all is dark and the pandemic is taking hold, I think a dose of Santosh is what we all need to bring some light and happiness into our lives. What a truly beautiful human being.”

What’s that earthy flavour in the sauce? enquired Monica Galetti ‘It’s a black Himalayan moss which monkeys find an aphrodisiac.’

Thirteen is considered to be unlucky for some, so entering the 13th annual series of Masterchef, The Professionals might bring with it some unexpected surprises. If you thought 2020 was the unearthliest year in modern history, Masterchef, The Professionals reflected it pretty well. Taking the limitations of a pandemic into account, conventions were no longer adhered to and received wisdom was questioned. For years it had been de rigeur just to cook some meat or fish in a modern European style with traditional pairings. If you wanted to be oh so naughty you might put a square of dark chocolate in the sauce for your venison, but even this was usually considered de trop; if you wanted to be playful you used  popcorn. But as the cast of hungry applicants diversified, it had reached the point where they were expecting a self taught chef raised in Nepal, whose back story involves working as a labourer digging canals at the age of by 12, to know how to make a Bordelaise sauce. One contestant last year had never seen an artichoke before, let alone known how they’d serve one à la Barigoule in fin de siècle Paris. This year, hitherto normal things like pan fried duck were on the back burner under the advance of the outré. We had entered a culinary world of weirdness where you could put mango in your gravy or fennel in your ice cream and it wasn’t considered a disaster but a triumph. In 2020 anything went – hay custard? Why not. Marzipan-filled cherries as a side with that duck, you say? Yum. What can you serve to cut through your beef fat enriched toffee sauce? Why caviare ice cream – what else? Silly me.
And as well as the weird, the exotic increasingly made an appearance, which was where the Black Himalayan moss with its male testosterone simian fan club fitted in. Some rare and unheard of ingredients introduced to us were water buffalo, bee pollen, and stone fungus in a pudding. Jungle bread on a lemongrass skewer. Yum!! Marinated tandoori octopus made its first appearance on Masterchef. After unfortunately losing my bet on backing chef Santos Shah to win the competition, fans like myself hailed Santos as the “people’s champion.” Shah, the Nepalese-born “spice wizard,” 35, who works as development chef at Cinnamon Kitchen in London, received an outpouring of love and support on social media after being named runner up. Shah, who wore his national hat for the final, put Nepalese food on the world map. 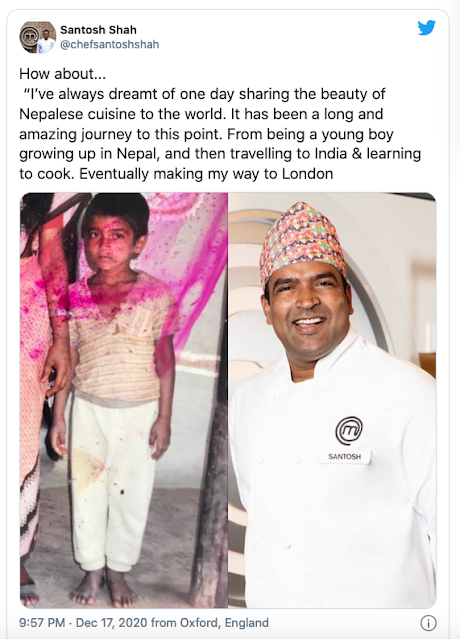 Shah, who has spoken of his ambition to open a Nepalese restaurant, shared a photo of himself as a young boy with dreams of delighting the world’s tastebuds with dishes from his homeland. He tweeted: “I’ve always dreamt of one day sharing the beauty of Nepalese cuisine to the world".
Santosh was born in Karjanha, a small village in the south-eastern district of Siraha, near Nepal's border with India. The youngest among seven children (two sisters and five brothers), he was just five when his father died. For pocket money when he was 10 he would sell plastic bags and other items at a local fair.
"With my friends, I used to walk up to 7km [about 4 miles] on foot, buy a few loaves of pau roti' [bread] and sell them at the fair," Santosh recalls. "I also worked as a labourer at
a canal construction project in my district."
He managed to study up to class 10 when he was 15 but didn't pass school leaving exams. "I then went to Gujarat state in India along with friends from my village in search of a job," Santosh said.
Santosh’s use of bold flavours and vivid colours gave him an edge in the competition, with the judges nearly unanimously praising his dishes. Santosh trained in India for ten years before moving to London.He now works for The Cinnamon Collection under Vivek Singh. Restaurants in the group include The Cinnamon Club, Cinnamon Bazaar and Cinnamon Kitchen. Thirty-five year old Santosh impressed critics, particularly Grace Dent and Tom Parker Bowles, with an octopus starter and lamb main dish served with Nepalese goat curry sauce. Shah has been a source of inspiration for young individuals who are making their way in the hospitality industry.
I tended to engage deeply in the particular episodes he appeared in as they were just thrilling for me. A breath of fresh air in a world full of horrible things. It’s not just that when he was in the midst of preparation, but even when his time was about to be up or during the presentation, I got goosebumps.
The way he creates fusion is amazing. His twist without losing the dish’s authenticity is noticeable and appreciable. Indian and Chinese cuisines have overshadowed Nepali cuisine for too long, but with Chef Santosh’s initiative in the show, it seems like Nepali cuisine has received the limelight that it deserves and my gut feeling is we will be seeing a lot more of it in the coming months.I certainly live in hope.
It wasn´t just an admiration for his skills that did it for me, but also the warmth and humility he exudes. Shah explained to the judges that his mother would make packed lunches for him when he went to work as a riverside labourer at the age of 12.
Inspired by her creations, he prepared his own lunch boxes which he dedicated to the “most important person in my life”.

After sampling the stuffed okra, crab curry and chocolate pudding, Wareing told Shah his
“incredible” meal had told a story of “passion and love for someone special”.
“I think you’ve made your mum very proud,” he added.For his main dish in the final, Shah served up spiced buffalo with sauteed morning glory, potato masala cannelloni, gooseberry chutney, and a paratha bread filled with buffalo milk paneer served with Nepalese rice wine. He recently met prospective investors to discuss launching a Nepali restaurant in the heart of London. "They were not interested at the beginning. But after I was selected to be on MasterChef, they have invited me for business meetings as soon as
I am free."
Fans are already falling over themselves to book tables at Shah’s prospective restaurant, with one writing : “So when and where is Santosh opening his Nepalese
restaurant? And are they taking bookings yet?”
Another Twitter user asked: “Who's with me on chipping together to get Santosh a restaurant?

“Santosh is a genuine highlight of 2020. What a wonderful, radiant human.”

“I think most people want to savour his incredible food. Fair play to Alex and Bart, the other two finalists two great chefs too.... But in my eyes Santosh wins my heart and the hearts of his nation!”

Santosh, who is still single, has another pressing priority too.
"I am planning to get married next year - if I find my soul mate," he says. "Perhaps, this is the right time. "Come on girls....... If I was available I would even jump on his bus,but unfortunately its the wrong bus!!!
Email Post