All tomorrows parathas, they aint half hot mum 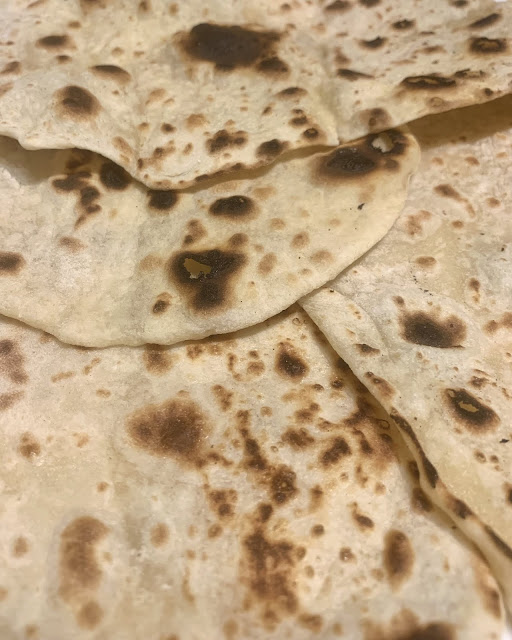 I have never been scared of taking on Indian food – far from it, a traditional indian dal is a go to lunchtime filler for me, be it on its own or spilling out of a wrap with some crunchy lettuce. Im at home with chickpeas and my Chicken do pyaza is still a delicious work in progress. But in our house, these things have  always been served with rice, due to my assumption that those gorgeous, pillowy restaurant type naans I love for soaking up that rich, spicy gravy were beyond my capabilities. After a revelatory moment a couple of years ago, the voice of Anna Jones came out of the ether at me ( how scary could that be!!!) It involved a cast iron frying pan and a hot grill, but I was still wary of attempting a bread that had no toppings to hide behind. Well, it turned out I was wrong.I now knock up parathas, roti, naans, chapatis and flatbreads every which way, akin to the comic adventures of that group of misfits who formed an extremely bad concert party touring the hot and steamy jungles of Burma ..... and ask the thespian, they ain´t half hot mum. Since I began making my own flatbreads I have gradually developed the recipe and I think I am now happy that my current version is IT, I wont make any more changes
Frying pan yoghurt flatbreads (above) Makes 4 (adapted from a recipe by Anna Jones)200g white flour, plus extra for dusting
1 tsp baking powder
120g Greek Yoghurt
80ml water
1 Put all the flatbread ingredients into the bowl of your food processor and pulse until the mixture forms a ball. If you don’t have a food processor, this can be done in a bowl using a fork to begin with, followed by your hands, but it will take a little longer.I personally prefer this method and the one i have permanently adopted,
2 Tip the dough out on to a clean work surface dusted with flour. Knead for a minute or so, to bring it all together. Put the dough into a flour-dusted bowl and cover with a plate. Put to one side to rise a little for 10–15 minutes. Don’t expect it to rise like normal dough, but it may puff up a tiny bit.
3 Dust a clean work surface and rolling pin with flour, then divide the dough into four equal pieces. Using your hands, pat and flatten out the dough, then use the rolling pin to roll each piece into a disc roughly 20cm in diameter and 2–3mm thick.
4 Warm a frying pan or griddle pan that’s a bit larger than your flatbreads over a medium heat. Once your pan is nicely hot, cook each flatbread for 1–2 minutes on each side, until nicely puffed up, turning with tongs.
Email Post