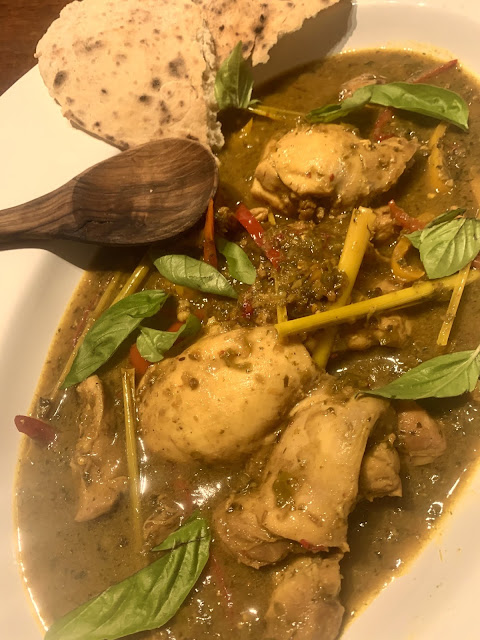 Whole chicken thighs submerged in a deeply savoury golden curry redolent with spices. When the dish arrives on the table, flanked by impossibly flaky flatbread for sopping, you've got to be all in, tearing the juicy meat apart and swiping the bread through the rich and spicy sauce, table manners be damned. Thai food should be fiery but not burn you, and this dish demonstrates just that: A mix of green Thai chiles, serranos, and jalapeños yields just the right balance of heat. It is so delicious that if you make it at home to share, be warned: You'll be fighting for that last drop of curry sauce. If you ask most fans of Thai food in the West what their favorite curries are, they’ll probably rattle off a list pretty quickly—red, yellow, green, massaman, panang—because they’re so ubiquitous that they’ve become as familiar as pho or sushi. However, for many people, they also happen to be the only curries they know, because they’re the only ones offered by most Thai restaurants.
That’s a shame because there are countless kinds of curry in Thailand. There are curries that are popular throughout the country, like the ones listed above, but then there are others that like in many other countries are unique to a particular region, and there are even curries whose recipes are unique to specific families.
I don’t like to offer strict definitions for food, but what Thai people call gaeng, which translates roughly to curry, is a dish whose primary source of flavour is a prik gaeng, or a curry paste. The other defining feature of a gaeng is that it has a significant amount of liquid, ranging from completely soupy to just saucy.
A prik gaeng is simply a paste of ground up herbs and spices, the most important of which are the prik, or chillies.Gaeng can be one of themost humble, everyday dishes, but it can also be a part of a very fancy meal.
Even though the variations are endless, you can divide curries into two general categories based on what kind of liquid they use: coconut milk or water.This Gwaeng rawaeng uses the former.