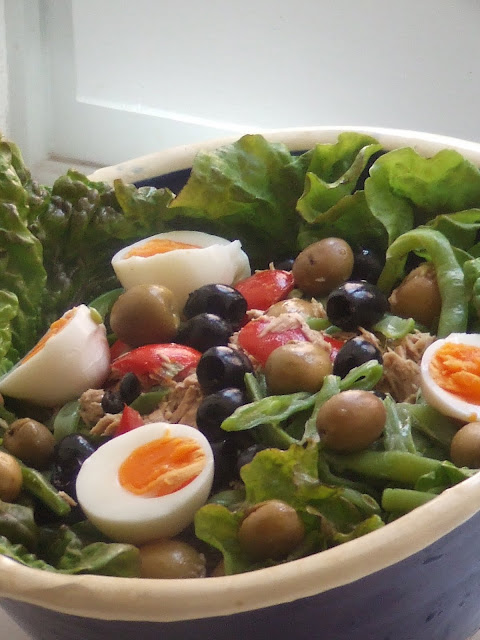 " What crimes have been committed in the name of this pure fresh salad...!"

Everybody knows Salad Nicoise. So they think they do?- a bit of lettuce, a couple of tomatoes, some French beans and potatoes, soft boiled eggs, a few olives, a tin of tuna et Robert est son oncle. Robert may be, but Jacques isn´t, Jacques Medecin that is, one time mayor of Nice, wrote La cuisine du compte de Nice, a compilation of recipes based on his grandmother´s coooking. He violently disagrees with having cooked vegetables in his "authentic" Salade Nicoise, so out go the beans and spuds. In their place however is a positive riot of raw ones.Escoffier´s recipe for salade Nicoise, written 50 years earlier is simply:"Tunny fish(Tuna) in oil, tomato, anchovy fillets cut into cubes, mixed with chervil and chives. A little mustard may be added.
Here are two versions with very different effects.

Rub a big salad bowl with a clove of garlic and arrange the ingredients in the order given .
Sprinkle with vinegar, salt and pepper and anoint in copious amounts with good olive oil.
Toss well at the table before serving.


Salad Nicoise (bogus)
"Oh you are awful but I like you".
2 round lettuces,oak leaf, baby gems or mixed leaves
(leaves separated and washed)
6 large tomatoes, peeled and quartered
6 hard boiled eggs, halved
400g baby new potatoes, scraped boiled and halved
400g french beans topped tailed and boiled al dente
(I substitute runner beans which are more readily available here in the Algarve)
250g good quality canned tuna such as Ortiz
100g black olives
Vinaigrette
In a bowl arrange the ingredients around and over the salad leaves in a high pile. Make a vinaigrette and pour over the salad. Toss the salad at the table before serving.