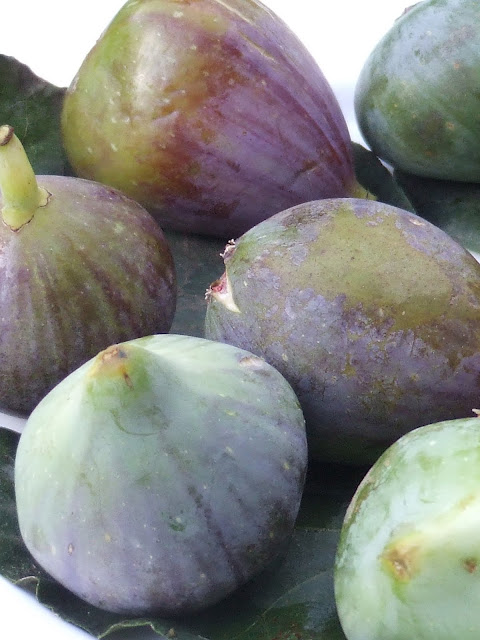 A naked woman reclines comfortably on a bough while an admiring male and a mischievous looking snake survey the scene from nearby. A classical painterly image of biblical temptation. Temptation being an apt metaphor, since the fig is an alluring fruit with a stunning shape and smooth, velvety flesh that when penetrated gives way to an interior filled with a texture and seeds that seem almost like ground nuts.
According to Genesis, after Adam and Eve had consumed the forbidden fruit ( an apple) , their eyes were opened and they realized their nakedness.  They covered themselves by sewing fig leaves together and making aprons. Thus,from an Old Testament point of view, figs have been in existence since the inception of the world. Secularly speaking, figs were possibly one of the first fruits cultivated by man.  There is archeological evidence over 11,000 years old from the Jordan Valley suggesting that agriculture began with the fig.
Figs are employed in multifilarious savoury and sweet dishes including jams, tarts, mousses, salads, purees and stuffings.In Europe, roasted figs are used to flavour coffee. The Arabs ferment them into a spirit.  And in many cultures they are still relied on for sundry medicinal purposes.
When you have a fruit as beautiful as this, and one that´s at its peak of perfection this time of year little is required to create a sensual and satisfying dish. The question is should it be simply taken in hand and devoured voraciously or exalted by cooking. Whichever you choose paradise is just around the corner.
Baked figs with Orange Licore and whipped cream
Serves 6

Pre-heat oven to 300F
Prick bottom of each fig several times and stand them in a buttered 24cm flameproof gratin dish.Sprinkle figs with 1/3 cup sugar, then add water to the dish.
Bake the figs in middle of the oven, basting twice with pan juices, until tender. About 30 minutes.Transfer dish to stove top, then add 1/4 cup orange licore and bring to aboil over a moderately high heat.remove from the heat and carefully ignite the pan juices. After the flames subside, the juices should be syrupy.if they are too thin, transfer the figs to a shallow serving bowl, then boil the juices until reduced and syrupy, 3-5 minutes, then por over the figs.
beat the cream with the remaining two tablespoons sugar and a tablespoon of using an electric mixer until you obtain soft peaks.
Serve figs in your very own Garden of Eden, warm or at room temperature, with syrup and cream, not resisting temptation.


*Grand Marnier is a liqueur created in 1880 by Alexandre Marnier-Lapostolle. It is made from Cognac flavored with the peel of bitter Haitian oranges, spices, and vanilla.
Email Post