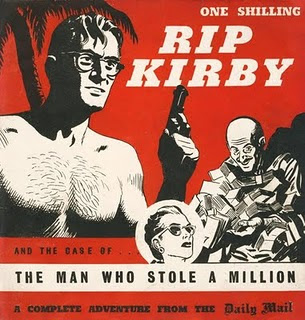 I was recently given an introduction by friends to a new Insurance broker for motor cover.
Responding to his request for my full name I nearly fell off my chair, when he said "Oh RIP KIRBY!!!!". An insurance agent in Tavira  Portugal was familiar with the popular 50´s comic strip and knew about a private detective created by Alex Raymond in 1946.- TRULY AMAZING!!!!!. The fact is how could someone younger than me know of a daily comic strip published in The Daily Mail, for its sins, 60 odd years ago. WOW!!!!! 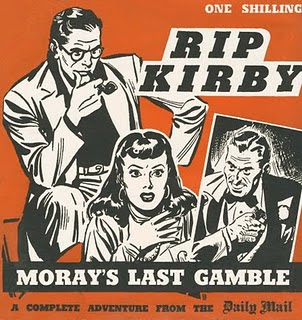 A little bit of background
Having relinquished the Flash Gordon strip to fight in World War II, Raymond returned to create something completely different, a new strip featuring scientist-turned-private-detective Rip Kirby, an ex-marine, a former athlete, and a genuine intellectual, a bookish-looking urbanite who smoked a pipe and even wore glasses. This postwar paragon solved cases with the help of his valet (and former safecracker), Desmond, and his fashion-model girlfriend, Honey Dorian. The cultured and cerebral Rip may not be as well known as Flash, but his strip was technically far better work than Raymond’s gorgeously drawn but stiff and stilted SF epic.
I wonder if he was interested in food.I can´t find any mention of his eating habits.
There should be a campaign to revive the eponymous RIP
Email Post