A town its tuna and two recipes 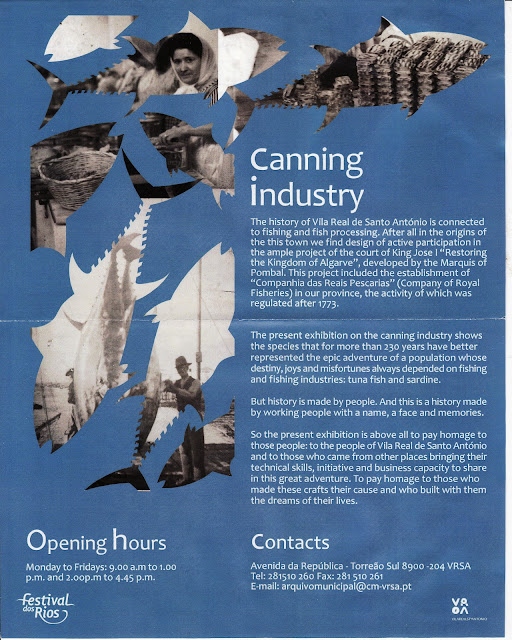 You can not possibly visit the town of Vila Real de Santo António without visiting the town archive.For here is preserved a very special and beautifully presented documentation of the passion for the sea that has always been a symbol and a feature of the Portuguese people.This passion  was the catalyst for the fish conservation industry which began over a century ago, and is no more evident  today, than in the lovely town of Vila Real de Santo António.
This tradition goes back to the late 19th century when, in Vila Real,men went out to sea and caught fish to be conserved and consumed later on, mainly during the most harsh and rigorous winters.
After the Second World War, this officially became an industry. Canned tuna and canned sardines are now staples of the modern Portuguese diet.
Having visited this magnificent exhibition recently the memory, every time I crack open a tin of tuna or sardines, serves as a reminder of the wonderful patrimony of this town.The gastronomy of Vila real de Santo António is rich and varied, with many dishes made from fish and shellfish caught in the sea,on the sandy beaches and in the Guadiana river.Today fishing for tuna has virtually disappeared from Algarve shores.Portugal´s tuna supplies now come from the Azores.Tuna fishing in the region goes back to the time of occupation by the Phoenicians or Carthaginians.Among the various dishes that have survived are two of my local favourites. The first, and one of the most popular, is the estupeta prepared with meat from the belly of the tuna.This is Vila Real´s very own version of salade Nicoise and very refreshing it is too. 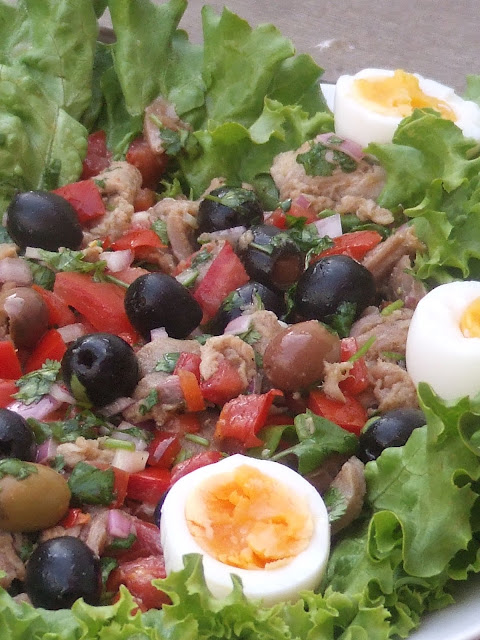 Clean the tuna and soak it overnight in cold water. Change the water once or twice. After soaking, cut into small pieces of around 2 cm.Wash them again in cold water and squeeze well.
Peel and slice the onion into little dice, do the same to the pepper (green or red) and clean 1 tomato, cut it into little cubes also.
In a bowl, pour all the ingredients, ie, tuna, onions, peppers and tomatoes, season to taste with salt, pepper, olive oil and vinegar and mix.
In a salad bowl or platter, place a few lettuce leaves, cleaned, and on top, place the tuna mixture in a pile or as desired. Cut the lemon in half and squeeze over the tuna.Keep the estopeta chilled in the fridge for a good two hours before serving.
Garnish around with slices of the other half of the lemon, another tomato, egg, olives and, if desired, onion rings.

Place tuna on a platter.  Season with salt, white pepper, two cloves garlic, peeled and chopped and a little white wine.
Peel onions and cut them into slices.
In a skillet (traditionally clay) pour the butter and let it boil. Let heat and add the remaining garlic, onion and bay leaf.
Place the steaks, taking care of the back, to cook on both sides, stirring onion.
Serve on its own skillet, served with fries, a bowl, and sprinkled with chopped parsley.