Dias Medievais-These are the days 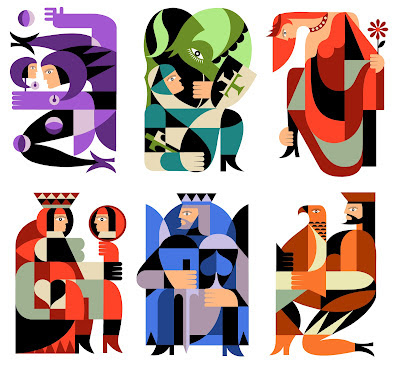 For four days and four nights from 23 to 26 August 2012 the little sleepy town of Castro Marim becomes a page torn from a history book. Castro Marim is transformed into a medieval stage where different scenes dating back to the Middle Ages are relived, giving us nothing less than a living history lesson.With many thousands of visitors expected, between the first and last day we are anticipating  a grand historical pageant involving hundreds of participants, tournaments, fire eaters, jugglers, minstrels and cheeky smiling jesters. An extravaganza of street entertainment, a programme of cultural and gastronomic celebration are  aspects that enrich these Medieval Days with ludic moments of true inspiration.
In a small town that once a year totally adapts itelf to medieval times, visitors can experience a trip in the time machine to an age inhabited by kings and queens, nobles and monks, fearless knights and monsters. Medieval banquets and taverns cooking up delicacies of the season, are some of the moments that make for an unforgettable long weekend."Nobless oblige" -  whoever claims to be noble must conduct himself nobly.
Flags and banners are already unfurled and flapping in the wind above the castle.The ghosts of the Knights Templars are being awoken and reminded that it is the final weekend in August.We, as modern day townsfolk, are also reminded of this annual occasion by the appearance of the bold and brassy graphics around us, promoting the festivities.Over the coming days a melange of heady aromas will fill the air in our narrow streets. Smoky whiffs from the grilling and barbecuing meats; sausage,pork loin and our most favourite of all the leitao (suckling pig).A potpourri of scents from stalls manned by quacksalvers selling their remedies and tinctures, exotic scented soaps,perfumes and therapeutic oils. 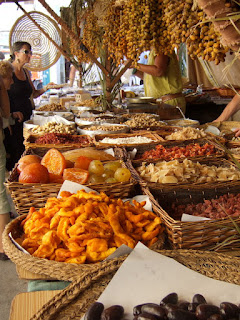 Sweet and fragrant smelling dried fruits and Mediterranean spices mingle with the deathly smell of salted cod, charcoal cinders and dust filling the often acrid and arid afternoon air. All combined with the smell of octopus tentacles drying on a hot grill! As dusk descends the roll of drums can be heard,flutes fill the alleys with a medieval toon or two. Let the procession begin with .....the arrival of harlequins,bards,men at arms, Moors and knights on horseback.The streets are awash with men and women in medieval costume passing by houses decked with pennants and ribbons,their wrought iron balconies decorated with tapestries and heraldic motifs.Onwards and upwards, whirling dervishes greet you as you enter the castle and then you walk past falconers with their noble birds. Spinning wheels, bread baking, basket weaving, rug making, black smiths, saddlers, potters and lacemakers demonstrate the magic of their traditional craftsmanship. Once inside the inner sanctum, as we look out from the castle ramparts across the Guadiana river that forms the border of Portugal and Spain we are once again reminded of the days the Moors used Castro Marim as a trading centre.Iron ore and tin was shipped along this very river from the mines around Mertola. Medieval trading marked the beginning of a new monetary economy. So too in our modern  "Dias Medievais" this new era is recreated.Inside the Castle its own currency is in circulation, the "real", which visitors can buy from the scalpers. With it they can shop and hold a piece of magic from these days and return to the past in the reality of the twenty-first century. 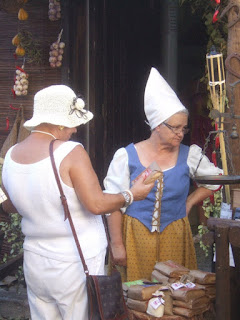 So if "Reales" are the preferred method of payment proffered in return for current euros from the medieval casa de câmbio or "bureau de change" why do we find medieval citizens queuing at cashpoint machines?And finally if one is not going to dress up in traditional gear and transform oneself into serf, bard or wench a hat will always suffice and - What sort of hat would you have worn in Medieval times? and what sort of hat would you wear to this type of event? Hats were an important part of medieval garb, so depending on one's occupation and the time of the year, hats could vary from linen head warmers, to straw or felt hats, to "borrelais" hats to fine mesh mail coifs, to "sallet" helmets, to visored "basinets" to mitres and crowns.The thespian rather fancies himself in a hennin while I see myself more as a basinet  bastard!! Oh well you may see us hennin up the hill to o castelo in the next few days but according to the symbol for watering holes displayed on the official programme we will be stopping for a bebida or two at the sign of the wimple or the basinet.

Authenticity  is the word for four days and nights of banqueting, feasting and drinking.Dias Medievais is a festival and event the likes you have never seen. consuming us with its energy   and unveiling medieval life in all its glory and colour.And when all the jousting and tournaments are over the sun has gone down and we are treated to a spectacular firework display. 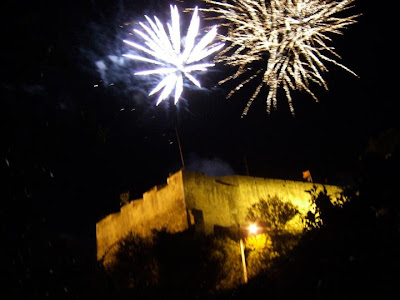 Over the course of the next week I will be posting medieval related recipes and to download the full programme visit http://www.cm-castromarim.pt/site/images/castromarim/gam/PROGRAMA2012dm.pdf
Email Post