Sing a song of sixpence a pocket full of rye,
Four and twenty blackbirds baked in a pie.
When the pie was opened the birds began to sing,
Oh wasn't that a dainty dish to set before the king?
The king was in his counting house counting out his money,
The queen was in the parlour eating bread and honey
The maid was in the garden hanging out the clothes,
When down came a blackbird and pecked off her nose!

This evening is the opening of Dias Medievais in Castro Marim.The gates of the castle will be thrown open to crowds of medieval festival goers.One of the events on offer is a nightly medieval banquet in the castle.For most of us the word ‘banquet’ conjures up vivid and colourful imagery - plentiful food and wine, exotic recipes, lavish presentations, grand table layouts, glorious surroundings and all in all a marvellous evenings entertainment.On the table we have cinnamon, juniper berries, and sugar in your beef, sandalwood in your bread, "sweet herbs and sundrie flowers" beneath your feet. The pheasant on your plate has been dead for some days, but whatever - it swims in a sauce of seventeen spices. You've brought your own knife and spoon, or you eat with your fingers. You drink spiced wine and mulled ale by the quart, sharing the goblet with your neighbour. You're at a medieval banquet--welcome to the Middle Ages!
From swans to peacocks, venison to wild boar, salmon to pike .... medieval meat and fish dishes were usually served with a lavish presentation. Salmon and trout were amongst the most popular fish dishes served at banquets. Pike was another and usually served with a special medieval sauce  called Galentyne sauce which was quite strong (made from white wine, vinegar,  breadcrumbs and water and spiced with cinnamon, saffron, pepper, onion).
Another sauce served with fish (usually saltwater fish) – and as popular today as it ever was in medieval times – is parsley sauce.
Salsa Verde was a green sauce made from fresh herbs , vinegar and white breadcrumbs. It was popular because it worked well with many types of fish. 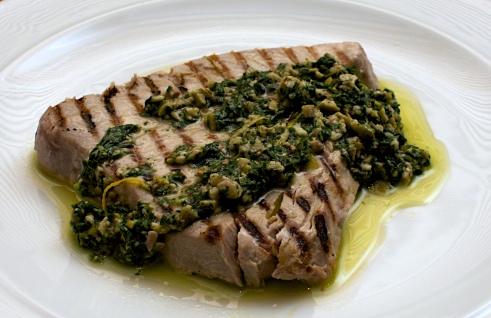 
FOR THE SALSA VERDE

To make the salsa verde, drop the herbs into boiling water for a few seconds, then drain and refresh under cold water. Squeeze out the water, then put on a chopping board with the garlic, capers, olives and anchovies and finely chop everything together. Scrape into a bowl and add the lemon zest, mustard, lemon juice, olive oil and some black pepper.
Heat a cast-iron griddle pan over a high heat. Brush the tuna with olive oil and season with sea salt. Put them on the griddle, turn the heat down to medium high and cook for 30 seconds to 1 minute on each side so you get nice char marks but the fish is rare on the inside.
Serve the tuna steaks with the salsa verde spooned over the top.