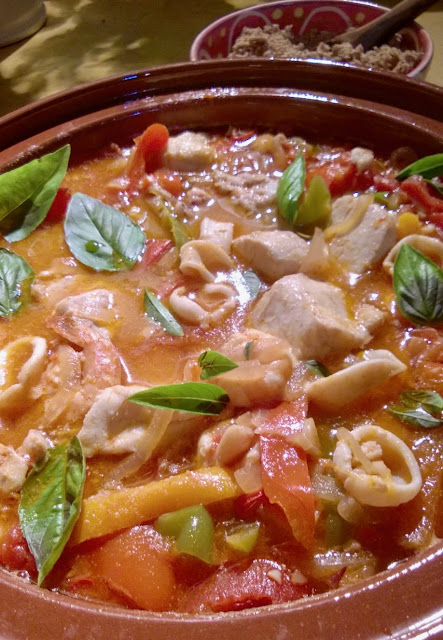 The bright summer colours of a Brazilian Moqueca
Whilst dining out at Aquasul restaurant in Tavira the other night I had a strong premonition confirmed for me.For some time now I have had a feeling that the cuisine of Brazil,South America's largest country is set to be the next big thing.When the waitress came to take our orders she informed us of the specials.We had a choice of lamb shank or a Moqueca.She went on to explain Moqueca .Because of my premonition I already had prior knowledge of the dish.The fact that the chef in this restaurant in mainland Portugal, and more exclusively Tavira, the prettiest town on the East Algarve had chosen to put this dish on his menu was proof of this.This vibrant moqueca, a thick seafood stew, hails from Bahia, the heart of Afro-Brazilian culture in the country's north-east.It definitely has a Latin American Portuguese feel to it.Featuring boneless white firm fish fillets such as hake, corvina ( grouper) and sea bass the result is a fish stew with red and green peppers and hot piri piri, mellowed by coconut milk.To give this dish its true authenticity it should be served with farofa.Farofa, manioc flour fried in butter, is served all over South America with all kinds of dishes.You can serve the moqueca without the farofa, if you prefer, but it helps to sop up the soupy liquid from the stew.Manioc or cassava root is one of the most popular ingredients in Brazilian cuisine. Traditionally food of the poor, cassava is so versatile and healthy that is used in many different ways.In this case it is served as a side dish replacing potato.
Manioc is a fundamental ingredient of Brazil’s indigenous tribes, and is rich in minerals such as calcium, iron and phosphorus, vitamins of the complex B and potassium. Absence of gluten makes it ideal for people suffering from coeliac disease.Farofa is the term for a side dish using toasted farinha de mandioca—in English, manioc flour, which is a dried flour similar in looks and texture to breadcrumbs. The making of farofa as a dish couldn't be easier.Beware, farofa can be extremely dry, since the manioc flour immediately sucks up all the juices from anything it encounters, especially when it's served plain. The trick to making a moist farofa is to use a small amount of manioc flour in proportion to the other components, turning a side dish into a savoury accompaniment that is so tempting, you may even forget there is a main course.

Corvina baiana moqueca with farofa
This recipe would traditionally use Dendê Oil (Azeite-de-dendê)but for two reasons I have not used it see the Note below*.Peanut oil coloured with paprika or annato oil (poor mans saffron) will give the dish the same intense colour but with a healthier result

Bahian cooking without dendê is unthinkable. It's an almost-omnipresent ingredient there and an essential part of the typical Bahian cuisine.
Dendê oil and its consumption by humans is a controversial topic among botanists and nutritionists. On the positive side, the bright red-orange color of the oil is due to the presence of high levels of carotenes - alpha-carotene, beta-carotene and lycophene. These phytonutrients are all highly beneficial to humans and have significant anti-oxidant properties. Studies show that dendê has up to 15 times as much beta-carotene as carrots. It is also a source of tocotrienol, part of the vitamin E family.
On the other hand, dendê oil is highly saturated, and the consumption of large quantities of saturated fats has been shown to have deleterious health effects in humans, primarily an increase in cholesterol levels.  Dendê does not contain cholesterol, only animal fats do that, but highly-saturated fats can contribute to increased levels of cholesterol in humans, both LDL ("bad" cholesterol) and HDL ("good" cholesterol).
The use of palm oil in food products has attracted the concern of environmental activist groups; the high oil yield of the trees has encouraged wider cultivation, leading to the clearing of forests in parts of Indonesia and Malaysia to make space for oil-palm monoculture. This has resulted in significant acreage losses of the natural habitat of the two extant species of orangutan. One species in particular, the Sumatran orangutan, has been listed as critically endangered. In 2004, an industry group called the Roundtable on Sustainable Palm Oil was formed to work with the palm oil industry to address these concerns. Additionally, in 1992, in response to concerns about deforestation, the Government of Malaysia pledged to limit the expansion of palm oil plantations by retaining a minimum of half the nation's land as forest cover.
It definitely has a Latin American/Portuguese t
Email Post