Parmesan and pear ice cream with a spiced pear confit -by George they´d got it!!! 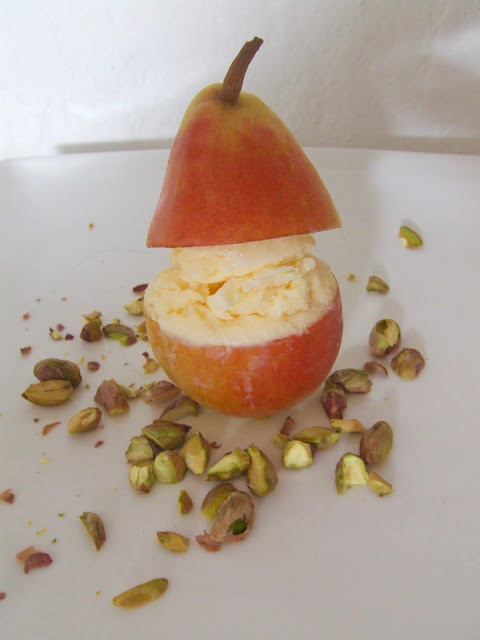 It is always lovely to be able look back into our past and find something old is new once again.Flavours that were once popular fall out of fashion for centuries, then suddenly make a comeback. Life is full of surprises.I was recently watching a television programme where four modern-day confectioners were given the task of making sweets as they were made in past eras.The episode in particular was centred on the Georgian period and the first revelation for me was that Ice cream was being made in the eighteenth century.an even bigger surprise for me however was when they came to make a traditional recipe for Parmesan Ice cream.No this was nothing to do with some modern Heston Blumenthal trickery, Parmesan was around in the eighteenth century.In hindsight this makes complete sense.Just like wine and people, Parmigiano Reggiano gets better with age.In the centuries before refrigeration, this hard cheese was ideal for storage and transporting over long distances. Parmigiano Reggiano was a favourite on sea voyages, but at the same time being beloved by connoisseurs.Ice cream making has always been the domain of the Italians and since introducing it to Europe in the middle ages, Italy has never relinquished its lead in this field.Over the centuries the manufacture of ice cream has in many countries been the province of Italian emigrés.
But ice cream and cheese,it has a ring of Peter Kay about it "cheese and cake,you dirty ......" but Heston Blumenthal and Peter Kay aside how could one dismiss it without actually making it.I totally adore pears and parmesan as a combo. And more generically, cheese and fruits.I achieved this pairing by serving the ice cream in a scooped out baby pear. I accentuated the Italian theme by using Mascarpone in place of heavy cream.
Parmesan ice cream
makes 1 litre tub
450ml whole milk
5 large egg yolks
125g caster sugar
250ml greek yoghurt
250g mascarpone
100g parmesan
Heat the milk in a pan till almost boiling.Remove from the heat.In a large deep bowl whisk the egg yolks and sugar together till pale and creamy.Slowly pour the warm milk stirring constantly.Return the the mixture to the pan with the parmesan.Stir constantly over a low heat until the custard is thick enough to coat the back of the wooden spoon..It must not boil as it will curdle.Remove from the heat and stir in the yoghurt. Pour into a bowl.Sit the bowl within another bowl of iced water and leave to cool.When completely
cool use an electric whisk to beat in the mascarpone.when fully mixed ladle into aone litre plastic tub and put in the freezer for 2 hours.Check the ice cream to ensure no crystals have formed and give it a good stir.Repeat this two more times at hourly interval then leave to freeze completely overnight.

For the confit of spiced pears
4 large Williams pears
400 g caster sugar
1 piece of lemon peel
1 tonka bean
Peel and cut the pears into small cubes.
Place in a large bowl, cover with the sugar, add the vanilla bean and leave to rest overnight.
Transfer to a saucepan, add the lemon peel and bring to a boil over low heat, skimming occasionally. Turn down the heat and continue cooking, skimming regularly, for 35 minutes. (Place a drop of the preserve on a cold plate, if it is cooked, you will be able to draw a line through it with a teaspoon
Remove the vanilla bean and blitz it with a stick blender.

Serve as above with fresh ripe baby pears.core the pare from the bottom very carefully, then cut the pair crossways in a proportion of 2/3 on the bottom to 1/3 on top.Scoop out some flesh from the bottom half and over fill it with ice cream.Put the top half back on and drizzle the confit over the pear garnish the plate with roasted pistachios scattered around the pear.

The verdict was  that we found it amazingly delicious for having such a dubious ingredient flavouring it. I found it pairs beautifully with pears and pistachios.I highly recommend trying it!