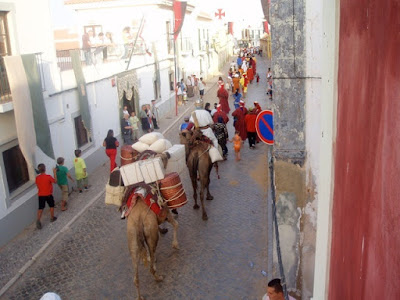 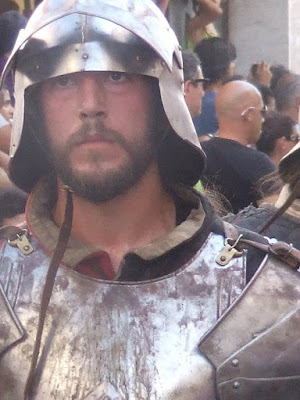 Dia XXIII Agosto 2017
Dear diary
Here bygynneth the tales of Baesuris (Castro Marim).Over the next four days we will crosse time from the past and back to the future. Conspiracies will be unveiled and fact will mysteriously merge with fiction.These here tales make Agatha Christie meet Eça queroz and cross with Boccacio`s Decameron. The pilgrims are already on their way from yonder Silves,bringing together  a diverse group of people representing a wide spectrum of society, holding amongst them various ranks and occupations.When the parade shall arrive we will see the distinguished and noble Knight (cavaleiro )and with him, his son, a youthful squire,A lover and a lusty bachelor,With locks well curled, as if they'd laid in press.Some twenty years of age,I guess.In stature he comports an average length,wondrously active, aye, and great of strength.He'd ridden sometime with the cavalry in Flanders, in Artois, and Picardy,And borne him well within that little space in hope to win thereby his lady's grace.We descend through the pious abbess (the Prioress), the honorable Clerk, the rich landowner (O latifundiário), the worldly and crude wyfe (a puta), and on down the scale to the low, vulgar Miller and  O afiador de facas,( knife sharpener),whose artesanal whistle you can hear in the distancestreets away.O sapateiro (cordwainer)

A haberdasher and a carpenter carpinteiro),Laura Ashleen the celebrated arras-maker,a dyer, and weaver were among them, clothed in similar livery,all of one sober, great fraternity.Their gear was new and well adorned it was;Their weapons were not cheaply trimmed with brass,but all with silver; chastely made and well.Their girdles and their pouches too, I tell. Each man of them appeared a proper burgess to sit in city hall on a high dais.And each of them, for wisdom he could span,was fitted to have been an alderman;(more of that story later...)
Now have I told you briefly, in a clause ,the state, the array, the number, and the cause
Of the assembling of this company In Castro Marim,all hoping for a room and refreshment at this noble hostelry known as the Casa Rosada, hard by the castle.
But now the time is come wherein to tell how all they bore themselves that very night
When at the hostelry they did alight. and afterward the story is engaged to tell you of their common pilgrimage, and the days that ensued.But first, I pray you, of your courtesy,you'll not ascribe it to vulgarity though I speak plainly of this matter here, retailing you their words and means of cheer;
Nor though I use their very terms, nor lie.For this thing do you know as well as I:When one repeats a tale told by a man,he must report, as nearly as he can, every least word, if he remember it, however rude it be, or how unfit; or else he may be telling what's untrue, embellishing and fictionizing too.