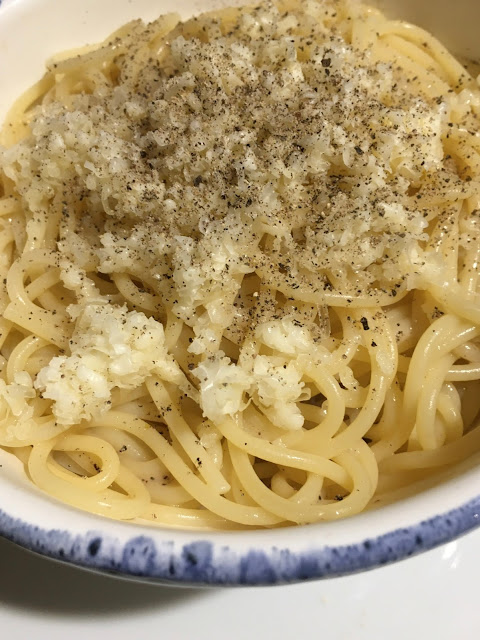 What makes a recipe so suitable for the present time. First off less is more.The fewer the ingredients a recipe throws at you, the chances are its accessible, cheap and easy to make.Secondly, its the perfect chance to gather up any ingredients you find  lingering in the back of your cupboards,bring them out and turn them into tasty meals.

Cacio e pepe hails from Rome and the surrounding region. In local dialect, cacio e pepe translates as“cheese and pepper,” and its ingredients are just that — cheese, black pepper, and pasta. But because the ingredients are so simple, the specifics of each really matter.The beauty of this dish is its three-ingredient simplicity – but it is very easy to get wrong.There is a fine line between clump and cream, and making a smooth sauce from dry cheese and water is a skill that needs to be learned, as I realised on my first, second and seventh attempts.The fats in the cheese need to emulsify with the water from the pasta, forming a rich, creamy and dense sauce that has neither cream nor (god forbid) any other kind of binder like flour or cornstarch. Once you’ve mastered it, however, cacio e pepe is a dish for life; one that can be knocked up in minutes with the most basic of store cupboard ingredients.
The cheese should be freshly-grated Pecorino Romano, a hard sheep’s milk cheese that also originates from the area and, while similar to Parmesan, is saltier and I think has more funk (in a good way). The black pepper should be freshly cracked and plenty of it so you can taste its heat and fruitiness, but not so much that it’s overpowering. In terms of the pasta,  spaghetti, bucatini, and tonnarelli — a square-shaped spaghetti that also goes by the name of spaghetti alla chitarra — are all traditional choices.
What cacio e pepe should not include is butter, cream, or olive oil. Some will argue Parmesan can be used in place of some or all of the Pecorino, but my personal preference is to use solely Pecorino.I have to admit to conforming to what was available on this latest occasion,so i used my standby pecorino which is a Portuguese semi hard cheese called Nisa.
If you’ve never heard of it, don’t worry – until about two years ago, neither had I. Then, suddenly, cacio e pepe was everywhere, virtually speaking at least, a million slick strands of cheesy spaghetti clogging up social media like a hipsters fur ball, excuse the analogy!!!
Cacio e pepe
As the name suggests, the ingredients of the dish are very simple: black pepper, grated Pecorino Romano cheese, and spaghetti, literally "cheese and pepper", this minimalist cacio e pepe recipe is like a stripped-back macaroni cheese.You need to fail at making Cacio e pepe in order to succeed – I have many times, seeing how the cheese can clump and harden into strings (which is usually because the pasta or cooking water is too hot
Serves 2
100 g long dried or 130 g fresh egg pasta per person
40 g finely and freshly grated pecorino romano cheese per person
2 tablespoons good extra virgin olive oil (optional)
good quality, whole black peppercorns
coarse salt

You will need a large pan, a large bowl, a grater (I like my microplane), a large fork, a ladle.

Bring a large pan of well-salted water (10 g of coarse/Flor de sal for every litre) to the boil.
Meanwhile toast the peppercorns gently in a small frying pan until the fragrance and essential oils open up. Crush the toasted peppercorns in a pestle and mortar. Grate the cheese, finely, onto a plate.
Bring a wide shallow pan of well-salted water to the boil, then add the pasta; it should be covered but not by much. Stir occasionally during cooking and, five minutes into the cooking time, scoop out 250ml water into a wide bowl to allow it to cool slightly.
Drain the pasta and leave it to cool for a minute. Meanwhile, put the cheese and most of the pepper in a large, heavy bowl or pan and beat in some of the pasta water very gradually to make first a paste, and then a sauce the consistency of bechamel. Add the pasta and toss furiously while adding enough of the water (you shouldn’t need it all) to make a sauce that coats each strand. Don’t worry if it takes a while to come together – keep beating and it should happen.
Divide between warm bowls, sprinkle over a little more pepper, and serve immediately.
Email Post