Glamorgan sausages. Waste not want not, turning crumbs into cuisine

"Wise use of one's resources will keep one from starving and poverty".

Of all the foodstuffs that we throw away, I think that bread is perhaps the one most sinful and criminal waste. I understand that you might not like the crusts, or that perhaps the bread is looking a bit tired, dried out or past its sell-by, but don´t you dare throw that "stale"bread away.You know who you are,you are guilty of being a member of those panic buying hordes who are now discarding your excess purchases to create rotting perfectly ongoing usable produce.
"Stale" is not necessarily a reason for throwing it out. I suspect part of the problem is how we define what is "stale". Because one or two even three day old bread does not necessarily taste "stale" - these are two entirely separate conditions.
Stale bread's properties can be celebrated as a virtue in the way that it absorbs moisture and flavours in a simple panzanella or fattoush salad or as a brilliant savoury bread pudding to accompany a Sunday roast or a sweet bread and butter pudding for 'afters', happily crossing flavour boundaries, from sweet to savoury.Lets take a look at some of the things we can make if we only took a little  time to be more thrifty...... 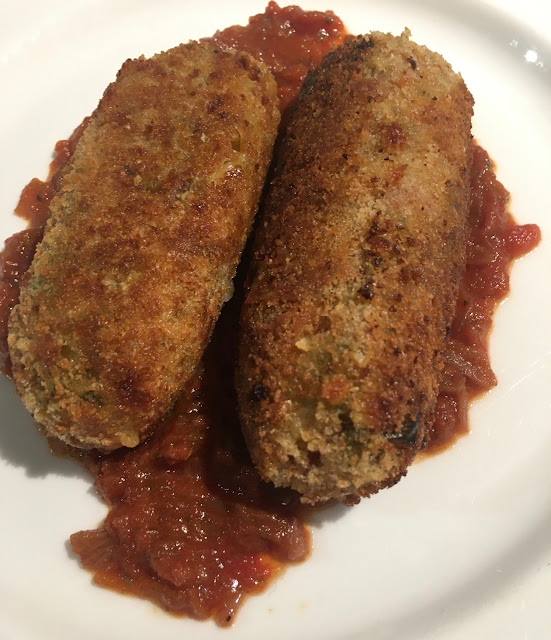 Enter the home made sausage.Yes, the only way to get through this, believe me,is sausage.Never mind friendship, selflessness and self isolation, a good home -made nugget is the only way to right proper home comfort.
Glamorgan sausages
Strictly speaking, I suspect the Glamorgan sausage ought to fall into that much-maligned category of what evangelical omnivores like to term "fake meat", being both sausage-shaped and sausage-monikered, but not actually containing any dead animals. Yet it doesn't seem to attract the same level of outrage as other vegetarian alternatives. Why? Perhaps because it's so unquestionably delicious. I suppose it's hard to feel vitriolic with crumbs round your mouth.
A product of necessity rather than vegetarian principle, this skinless sausage apparently experienced a revival in popularity when meat rationing came into force, obviously as it resonates thrift and frugality with its use of leftover breadcrumbs and small nubs of cheese. However,much to my disappointment I could not find any wartime recipes to try.These frugal charms also seem to have fallen out of favour recently. This is a great shame as they are easy to make and very tasty.Happily, I wasn't short of more modern alternatives.In these times of isolation, necessity becomes the mother of invention. 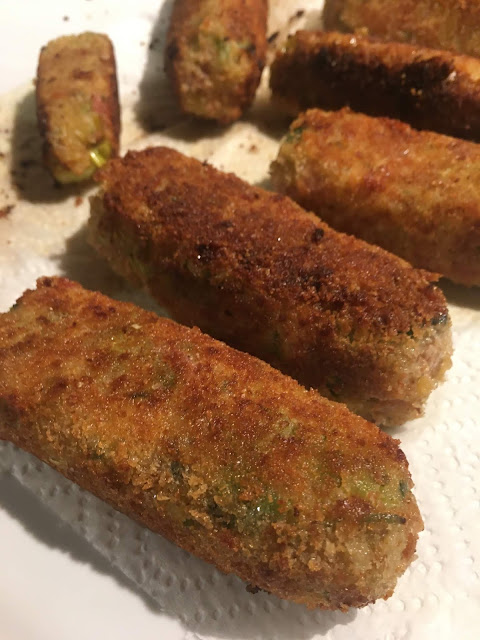 Traditionally, one assumes the Glamorgan sausage would have been made using the local cheese, but given that just one herd of the chestnut-coloured Glamorgan cow remains,it  is sadly no longer in production. As it was a crumbly white variety, most recipes suggest substituting caerphilly, which is apparently similar in texture and taste, but Jane Grigson gives the option of Lancashire in "English Food", while the Hairy Bikers recommend Welsh cheddar as an alternative.You can also add leftover pasta sauces such as a tomato ragu to the mix of dried breadcrumbs, (although any sauce would work).My starting point was La Grigson but I had to be bound by what was in my store cupboard and fridge at that moment.Choice of cheese was the main issue here,although I had Cheddar I thought a milder tasting white cheese might be closer to the original. Feta cheese was one option,goats cheese another,it was time to experiment I suspected.Would I use spring onions a la Grigson or shallots a la Torode.As regards mustard, would I include Dijon,English or dried mustard powder? My final dilemma was how to cook them,Grigson fries them in lard which I rather liked the idea of for its nostalgia element but it rather defeats the purpose and abandons the the vegetarian ethic.Here is my final tweaked recipe.Feel free to customize your own with what you have available.I think that is the only way forward with this one.These are tasty morsels, which make a brilliant lunch or light supper served with a simple tomato sugo (above).They would be lovely in summer too with a light tomato salad. How about a full English veggie breakfast.? They were cracking with my scrambled eggs on Sunday morning. 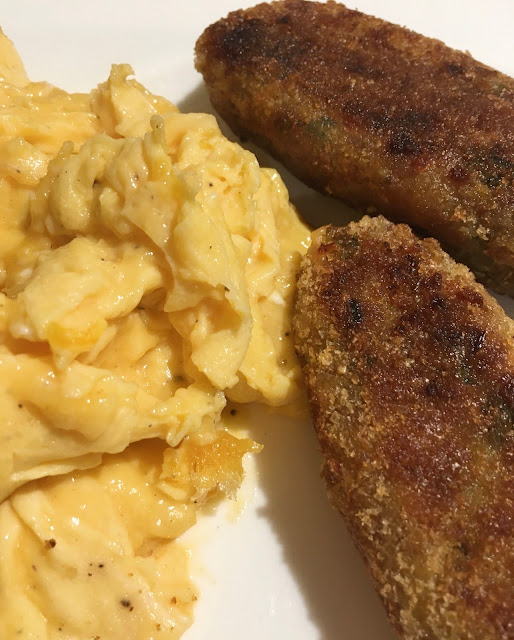 Serves 2
Skill level: Easy
Preparation time: 1 hour (including optional chilling time)
(Makes 6)
50g butter
100g leeks, finely sliced (about 1 large one)
Nutmeg, to taste
200g fresh breadcrumbs, preferably a mixture of white and brown, 50g for the coating
2 tsp thyme, finely chopped
1 tbsp fresh parsley, finely chopped
2 eggs, separated
1½ tsp English mustard
175g Caerphillly ,cheddar or cheese of your choice
2-3 tbsp milk
50g flour
Melt half the butter in a frying pan and sweat the leeks over a medium heat until well softened. Season well with salt, pepper and nutmeg. Set aside.
Mix together 150g of the breadcrumbs (save 50g or so in order to coat the sausages) in a bowl with the milk.You may need to add a tablespoon or more of milk. The mixture needs to be moist but not wet.
Beat the egg yolks, thyme,parsley and mustard together. Crumble the cheese of your choice into the breadcrumb mixture and stir in the leeks, followed by the egg yolks and mustard. Season, mix well and add gradually add the milk.Shape into six sausages (damp hands will make this easier) and chill for half an hour.
Heat the oven to 180C/350F/gas mark four. Meanwhile, whisk the egg whites until frothy. Put the egg whites, flour and remaining breadcrumbs on separate plates, and roll each sausage in the flour, then whites, then breadcrumbs to coat.

Melt the remaining butter in the pan over a medium-high heat. When hot, add the sausages and cook until just golden on each side. Transfer to a baking sheet and cook for about 20 minutes, until richly golden. Serve immediately.

Can anyone spread any more light on the history of this Welsh classic and its sadly lost cheese?
Email Post