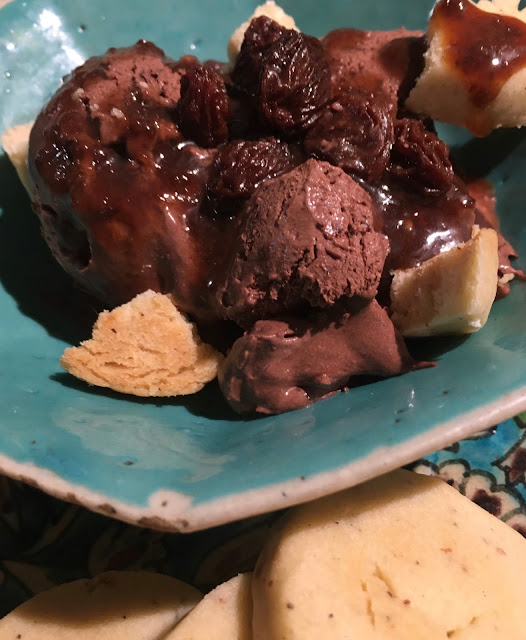 For forty days and forty nights most of Europe has been in lockdown,a coincidental parallel to Lent.Easter may not be the end of this confinement but in isolation it is a chance to give ourselves a pat on the back and a little treat for enduring a season of "fasting" and "abstinence."So here are just three things to create an end of Lent treat. Chocolate, dark sweet sherry flavoured with fattened raisins and cardamom biscuits.The flavours of molasses and raisins ,and the citrusy notes of the cardamom bring out the best in your pantry.This is a modern take on the classic rum and raisin ice cream I remember from my childhood.This is self isolation at its best.You dont need a big fuck off ice cream maker,just a humble whisk and a freezer:all the ingredients should be in your store cupboard.
PX (Pedro Ximénez) is a dark, sweet sherry with flavours of molasses and raisins. Which makes this a very special desert.Many years ago I was given a delicious concoction in a jar.I remember it well and thought I could create my own home made version with casa rosada´s very own dried raisins.This,may I call it a preserve, can be used as a sauce over vanilla ice cream,sherry trifles and many other puddings.This is a marriage made in heaven. The raisins absorb the delicious sherry while releasing their sugar back into the sherry, resulting in thick richly-infused syrup.A jar of this opens up a world of opportunities.
No churn chocolate ice cream
170g carnation condensed milk
600ml double cream
6tbsp cocoa
Tip the condensed milk into a bowl and sieve in the cocoa.
mix it all together making sure there are no lumps.
In another bowl whisk the double cream with an electric beater until it peaks.
be careful not to over whisk as it can cause curdling which is not what you want in ice cream.
Gradually fold in small amounts of your whisked cream to the condensed milk and cocoa until they are completely amalgamated. Transfer to a loaf pan or tupperware container and freeze for at least six hours or ideally overnight

PX (Pedro Ximenez) syrup
100g raisins
200ml Pedro Ximenez sherry
To make, simply soak 100g juicy jumbo raisins in 100ml Pedro Ximenez sherry. Leave the two to work their magic overnight but if you have the time for a week or so, in which time the raisins literally quadruple in size – the longer they are left, the better the results.
When you feelready decant the raisins and their steeping liquid  into asaucepan,bring to a simmer and cook gently until the sherry has slightly reduced to a syrup:remove from the heat and reserve in a glass bottle or jar until ready to use.

Cardamom biscuits
6 green cardamom pods
160g plain flour sifted
20g icing sugar
a pinch of salt
110g unsalted, softened to room temperature
Crush the cardamom pods and put the seeds in a mortar.Grind with the pestle until fine.Tip into a bowl and add the flour,icing sugar and salt.Add the butter and rub it in with your fingertips
until the mix resembles fine breadcrumbs.Turn the mix out onto a floured work surface and work quickly with your hands to make a smooth dough.Divide the dough in half and shape each into a "log".Wrap the two logs in clingfilm and chill for an hour.
Preheat the oven to 160C / 140C Fan/ Gas mark 3
Remove the logs from the fridge and slice them into 1cm rounds.Lay these side by side on a non-stick baking tray.Bake for 20 minutes or until light golden brown.cool on a wire rack.

TO SERVE:
Put scoops of the ice cream into bowls and spoon over the PX raisin syrup.
Either crumble the biscuits on top or serve them on the side for dipping.