A recipe for timelessness; dear diary 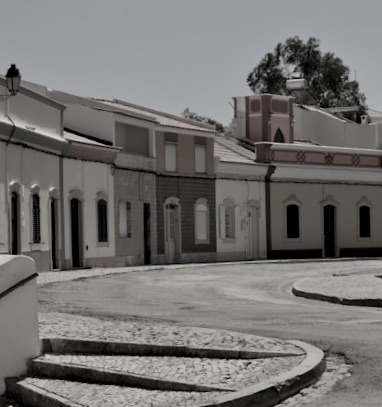 Those drowsy siesta hours walking through the Centro Historico of Castro Marim during lockdown will be imprinted in my memory for ever. Behind pulled down shutters the muffled sound of Portuguese national radio broadcasting. Shiftless, unstirring, starving feral cats. Even the street dogs seemed to have given up their incessant barking. It was enough to induce sobbing, or at the least bring a glimmer of a teardrop to ones eye. But once again it was just a little bit of history repeating.

"The word is about, there's something evolving,
Whatever may come, the world keeps revolving...
They say the next big thing is here,
That the revolution's near,
But to me it seems quite clear
That's it's all just a little bit of history repeating.
The newspapers shout a new style is growing,
But it don't know if it's coming or going......"  Propellerheads 1998

History makes a habit of repeating itself. Timelessness manifested itself in a poem that talked about self-isolation. This poem circulated on social media platforms last year in Lockdown 1, with a claim that it was written in 1869 and reprinted during the Spanish Flu epidemic in 1919. It is a great, and indeed prophetic piece of verse but the claim is false. It was actually first published on a blog in March 2020 by a retired American teacher named Kitty O´Meara  masquerading as Kathleen O'Meara, also known under her pen name Grace Ramsay (1839 – 10 November 1888), an Irish-French Catholic writer and biographer during the late Victorian era. The Oprah magazine exposed the truth that the claim was false and unmasked this so called poet laureate of the pandemic. It's obvious why this meditative poem has resonated so deeply with people.
It offers a story of how things could be, what we could do with this strange time that is beyond our control and makes us imagine that the "new normal" will not only exist—it'll be better than what went before. Instead, the major mystery became the identity of its mysterious author, a woman whose online presence boils down to a blog, a Facebook page, and lots of people asking: Who is Kitty O'Meara? Time alone has now told us.

And people stayed at home

And read books
And listened
And they rested


And did exercises
And made art and played
And learned new ways of being
And stopped and listened
More deeply
Someone meditated, someone prayed
Someone met their shadow
And people began to think differently
And people healed.
And in the absence of people who
Lived in ignorant ways
Dangerous, meaningless and heartless,
The earth also began to heal
And when the danger ended and
People found themselves
They grieved for the dead
And made new choices
And dreamed of new visions
And created new ways of living
And completely healed the earth
Just as they were healed.

This brings me to what makes a recipe timeless. Recipes that never go out of style, passed down from generation to generation, family recipes that are tried and tested, true favorites that we still love and cherish today. Traditional dishes accompanied by the stories behind them—that will take you back to grandma's kitchen. The words of Elizabeth David are just that. For those not familiar with this culinary matriarch, she was the woman who revolutionized British cuisine. Having spent some of World War 2 messing around on a yacht in the Med with her lover, she got serious and brought lovely continental recipes back to her home country. A hard job when even a banana was unheard of and omelettes had to be made out of powdered eggs - yuk I can´t even begin to imagine! She introduced a weary post-war nation to the sundrenched tastes and delights of the mediterranean, to ingredients like olive oil, pasta and garlic, to fresh herbs like basil and to vegetables like courgettes and aubergines.These ingredients were previously unheard of in  Britain, but they have now  become the staples of our diets today. She offered us through her writing unfailing kitchen wisdom. Her writing is as timeless as the cuisines she describes. Re-reading her recipes, I am struck again, and again, that each is a seductive little invitation to cook. And if you love to cook, discovering her work is surely one of the greatest pleasures of all, she had so much more to tell than merely how to cook. More interestingly to my mind is the fact that, with the exception of the occasional illustration, her books never contained any photographs. She is considered the greatest food writer of the twentieth century. Inspiring everyday
recipes were the basis of her culinary genius.
You don't turn to Elizabeth David for nannying, step-by-step instruction, or precise amounts and timing. She assumes you know the basics, and is a writer who offers inspiration, and wonderful, opinionated prose. Her recipes are classic, and all her books wonderful works of reference (and tirelessly researched) as well as beautiful reads. Her instructions for omelettes are unbeatable. I think most cooks would probably agree that her most iconic recipes stem from one book "French Provincial Cooking" One of the things we all probably cook the most, and something that can not be successfully tampered with, is an omelette so I have selected La David´s lasting advice on cooking an Omelette Fine Herbes. ( not with powdered eggs I might add) and  not from  "An omelette and a glass of wine" but... 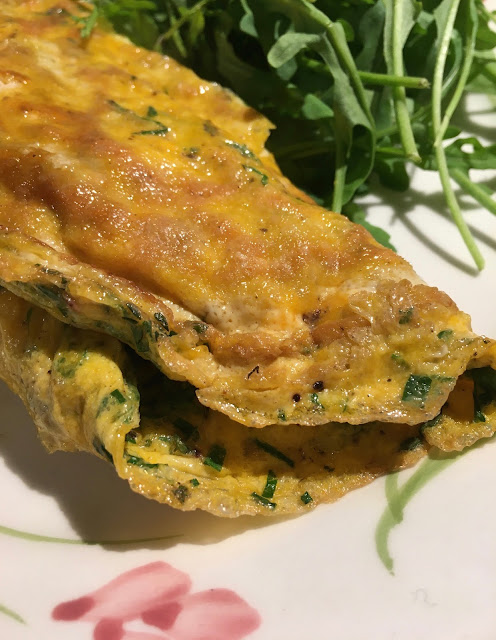 From "French Provincial Cooking"
"As everybody knows, there is only one infallible recipe for the perfect omelette: your own. Reasonably enough; a successful dish is often achieved by quite different methods from those advocated in the cookery books or by the professional chefs, but over this question of omelette-making, professional and amateur cooks alike are particularly unyielding. Argument has never been known to convert anybody to a different method, so if you have your own, stick to it and let others go their cranky ways, mistaken, stubborn and ignorant to the end.

It is therefore to anyone still in the experimental stage that I submit the few following points which I fancy are often responsible for failure when that ancient iron omelette pan, for twenty years untouched by water, is brought out of the cupboard.

First, the eggs are very often beaten too savagely. In fact, they should not really be beaten at all, but stirred, and a few firm turns with two forks do the trick. Secondly, the simplicity and freshness evoked by the delicious word "omelette" will be achieved only if it is remembered that it is the eggs which are the essential part of the dish: the filling, being of secondary importance, should be in very small proportion to the eggs. Lying lightly in the centre of the finished omelette, rather than bursting exuberantly out of the seams, it should supply the second of two different tastes and textures; the pure egg and cooked butter taste of the outside and ends of the omelette, then the soft, slightly runny interior, with its second flavouring of cheese or ham, mushrooms or fresh herbs.

As far as the pan is concerned, a 10-inch omelette pan will make an omelette of 3 or 4 eggs. Beat them only immediately before you make the omelette, lightly as described above, with two forks, adding a light mild seasoning of salt and pepper. Allow about ½oz [15g] of butter. Warm your pan, don't make it red hot. Then turn the burner as high as it will go. Put in the butter and when it has melted and is on the point of turning colour, pour in the eggs. Add the filling, and see that it is well embedded in the eggs. Tip the pan towards you and with a fork or spatula gather up a little of the mixture from the far side. Now tip the pan away from you so that the unset eggs run into the space you have made for them.

When a little of the unset part remains on the surface the omelette is done. Fold it in three with your fork or palette knife, hold the pan at an angle and slip the omelette out on to the waiting dish. This should be warmed, but only a little, or the omelette will go on cooking. An omelette is nothing to make a fuss about. The chief mistakes are putting in too much of the filling and making this too elaborate. Such rich things as foie gras or lobster in cream sauce are inappropriate. Moderation in every aspect is the best advice where omelettes are concerned. Sauces and other trimmings are superfluous, a little extra butter melted in the warm omelette dish or placed on top of the omelette as you serve it being the only addition which is not out of place.

Recipe: Prepare 1 tablespoon of mixed finely chopped parsley, tarragon, chives and, if possible, chervil. Mix half of this, with salt and pepper, in the bowl with the eggs, and the other half when the eggs are in the pan. If you like, put a little knob of butter on top of the omelette as it is brought to the table".