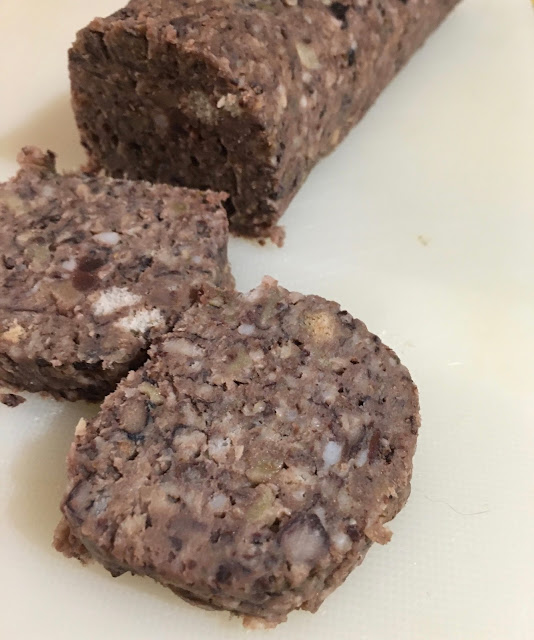 Ever since some boffin had the idea to stuff intestines with coagulated animal blood, flavourings and other assorted ingredients, humans have been making the most of their livestock’s leftover bits, and enjoying the bloody marvellous results. As a result almost every culture has some kind of black pudding tradition. There´s more to black pudding than blood. First off Black pudding isn’t a dessert – it’s a kind of sausage and as you know, how I love a good quality sausage. It’s an arcane, weird, divisive delicacy that’s a cornerstone of British regional cuisine. It’s designated British comfort food – but for me it’s much more than that. Similar blood sausages are served across the world – French ‘boudin noir’ and Spanish and Portuguese ‘morcilla’ being the two best-known examples.
Stornoway black pudding cakes are another variant  (Scottish Gaelic: marag-dhubh) made in the Western Isles of Scotland. The Italians have long been making sanguinaccio, a tart of pig’s blood and chocolate. In Norway it is known as blodpølse and in Sweden Blodpudding. People—not just the British—have been eating blood puddings for centuries, in cultures all around the world.
No Irish fry up is truly complete without at least a slice each of Clonakilty black and white pudding. And it's not just for breakfast anymore. Talented chefs have found ways to incorporate it into salads and main dishes. Black pudding recipes vary wildly, some include barley, breadcrumbs, and flour, but oatmeal is the old-fashioned thickener. Be sure it's steel-cut or pinhead oatmeal, and cook it until just tender. Individual nubs of oats should be visible in the final product. Added seasonings and spices vary from producer to producer. Store-bought versions will always be made in sausage casings, unlike my recipe.
It is far easier to buy black pudding ready-made, and there are lots of artisan producers making truly worthy versions. But even if you're unable to source fresh pig's blood, you'll be all set to make this recipe. For those that are squeamish, here is my blood free version .Its not vegetarian or vegan and it does contain pork fat. For those of you who have never heard of black pudding, or know it by another name, it is one of the most polarising food stuffs to emanate from the British Isles, possibly even more so than Marmite. Generally enjoyed with a full English breakfast, but often pushed aside in disgust it is essentially blood sausage.Those suspicious of its blood content and strong flavour won’t touch it with a bargepole. However, others love a few tasty slices of it on their breakfast, brunch or even dinner. I can sympathise with both sides of the debate.
Toast, butter, black Pudding, bacon, sausage. All these things are not the cardiologist’s friend. It’s never really going to be health-food. Nope,this is all about fat. Which normally equals, as we all know, flavour.
The nuggets of pig-fat that stud it are just meaty, chewy Haribo-pork goodness, and when sauteed in the same pan you get a crispy, crunchy exterior, and a moist, delicately spiced interior. Stacked up on a plate with warm toast and eggs any which way you’ve got a massive, massive flavour-bomb of  'Lancashire viagra.'
However, I think it’s worth reconsidering black pudding as an ingredient, especially if you’ve not tried it before. There’s no escaping the fact that black pudding is made from animal blood. If that makes you squeamish, it’s worth remembering that lots of meat products are made from unorthodox parts of animals, although we understand that the dark colour of black pudding makes it particularly foreboding. It was first made as a way to use up a plentiful by-product, making it an economical and ethical choice in that respect. If you really can’t get over the blood factor, you can find vegetarian or vegan black pudding packed with plenty of oats or barley if you look hard enough.
Who has the best recipe? The proof they say is in the pudding. 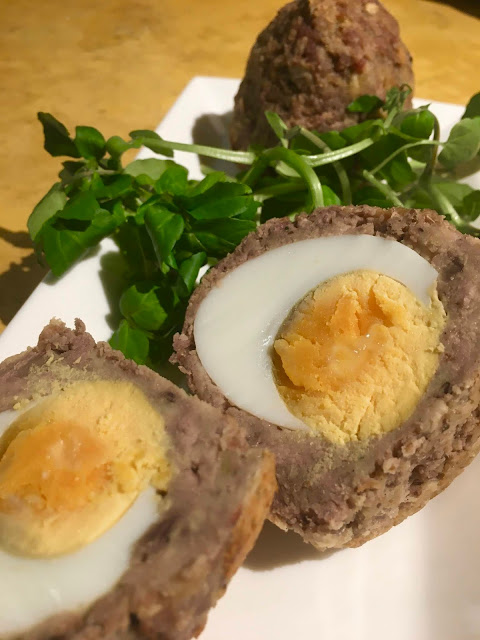 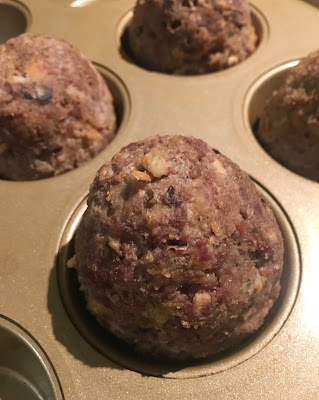 Because I try not to deep fry,I´ve found other ways of having my favourite foods.These scotch eggs are baked in a muffin tray.No crumbing, no deep-frying. Simple,really.

MAKES 8
Vegetable oil
8 large free range eggs
200g black pudding crumbled(see above)
200g good sausage meat (veal and pork mix)
100g white bread crumbs
100ml milk
1 free range egg beaten
Heat the oven to 190C/ gas 5.lightly oil a 12hole muffin tray.You will only need eight moulds.put the eggs in a large pan of hot water,bring to the boil and simmer for 5 minutes from the moment the water starts to bubble.Immediately drain and run under cold water to stop further cooking;cool and peel.
Soak the bread in the milk for 1 minute.Drain and squeeze dry.Combine the bread with the two sausage meats in a bowl,using your hands.Add the beaten egg season with salt and pepper and mix well.Press some of the meat into the base of each mould.add the eggs pointy end up and pack the meat around and over the eggs to cover completely.Bake for 20 minutes until nicely browned.leave in the moulds for 10 minutes.Drain off any juices,run a knife around to loosen and serve cold.
Email Post