Pigs in Blankets, Beef in boots, fish in coats, salmon in pillows, apples in pockets, purses and even slippers. Whether fish, meat, vegetables or fruit are involved, some of the finest and classiest dishes across the globe are "encased" in one form or another. Pastry, pasta, bread, caul fat, hogskins, wraps are some of the many casings used to envelop a filling. Samosas, pastillas, empanadas, momos, calzone, which my dear friend DW always alludes to as "a big old trouser leg", pierogis, borek, croquetas, 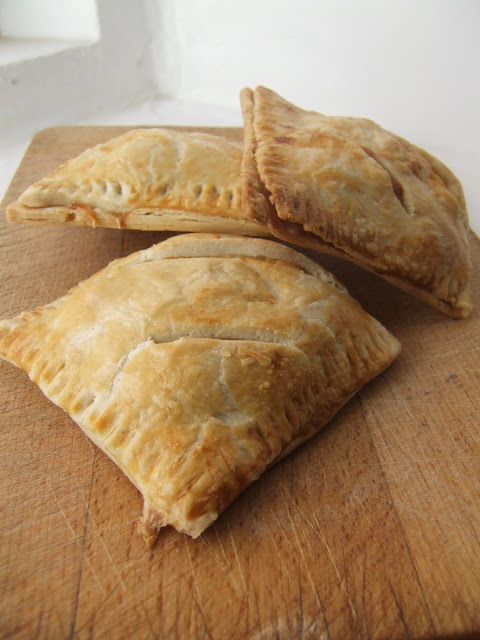 cornish pasties, apple turnovers / Chaussons (slippers) aux pommes. Which would you prefer, an apple turnover or a chausson aux pommes? I know which I´d go for, it sounds  eminently more appetising in a foreign language. Each culture has its own classics and some very strange translations abound. Salmon and Beef have both been candidates for being baked in pastry ( en croûte ), perhaps for some being wrapped in an overcoat meant keeping  the cold austerity at bay.  Sometimes one just wants to wrap up. I dont just mean donning an extra layer of clothing, it means we need to apply this type of comfort to our menu planning. The Russians gave us Coulibiac (from Russian: кулебя́ка, kulebyáka): A type of puff pastry pillow usually filled with salmon or sturgeon, rice or buckwheat, hard-boiled eggs, mushrooms, onions, and dill.
My choice of comfort comes in the form of a "boot", the reputable Beef Wellington. There are abounding theories as to the origin of the dish, many of which are somewhat amusing. The name arose because its form resembles the Wellington boot. The dish is said to be  of central African origin, traditionally using goat meat, and was allegedly discovered by Wellington when he served there (he never did). Or the dish is actually French, but re-named during the 19th Century wars with France. A celebration of the Alsace "boeuf en brioche" 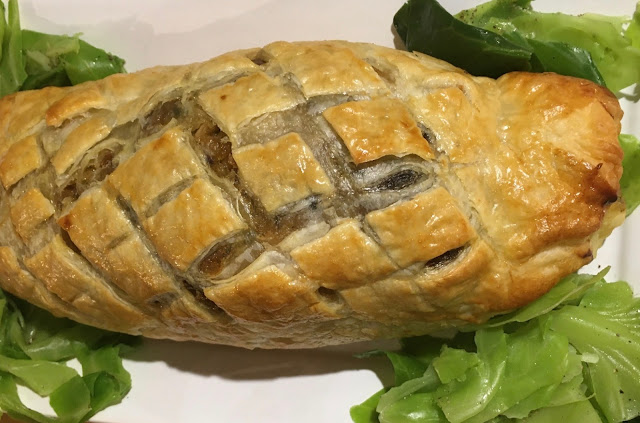 I like the last one a lot, it makes the dish sound so much more glamorous. Most of these "wrapped" dishes make an appearance in the colder months. Devils on horseback for instance, quirkily named "Pigs in Blankets" are the traditional British accompaniment to the Christmas roast turkey dinner that the British call "Trimmings". A sausage roll is a savoury pastry snack, manifesting itself in bakeries across the world. The pastry blanket swaddles each particular nation´s favourite "salsiccia tipico."  Golden purses" too, are one of my favorite savoury stuffed pastry snacks, available at many Thai restaurants, but a great canape to have at home too. A miniature version can also be served as buffet or party food. Preparing this post I put "beef in boots" into a search and google responded with amongst other things "fish in an overcoat." Delving deeper I unearthed a traditional Portuguese recipe I had not previously heard of "Robalo no capote"( literally Sea Bass in an overcoat) .My fascination immediately got the better of me.This was the sort of quirky dish I personally would order from a restaurant menu out of pure curiosity. Was my favoured choice of comfort food up to now about to be challenged by this new kid on my block?
The dish, it materialized, stems from a seaside restaurant just outside Lisbon. One of the specialities of Os Arcos is “robalo no capote” (fish baked in bread) €49. The fish is covered with a thin layer of bread and baked in the oven for about 45 minutes.
This whole concept appealed to me and having never tasted it I thought I would give it a try at home, for less than €5 I might add. The main problem was the absence of a recipe and in particular what type of bread dough should I use. 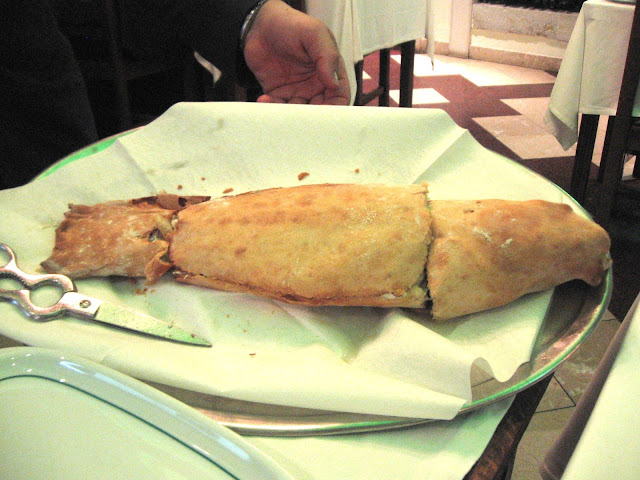 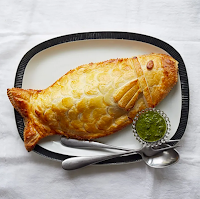 The picture I saw from the restaurant (above) gave it an appearance of the famous Italian variant on pizza, the calzone, where the pizza filling is totally enclosed in a bread pocket.I set about creating the recipe from scratch. Along the way I stumbled on a Jamie Oliver incarnation but his version was all bells and whistles fancy-schmancy and used puff pastry when the original dish called for being baked in bread so no help there Jamie. It tastes as delicious as it looks, amazing. Talk about dressing to impress?

Seabass baked in bread
For 2 people


Dissolve the yeast in a bowl with the warm water.
In a large bowl, place the flour and make a cavity in the middle.
Put a little flor de sal in the centre, taking into account that the bread will absorb the seasoning of the fish, tablespoon of olive oil and the yeast dissolved in warm water.
With your hands mix well until the dough comes away from the bottom of the bowl.
If necessary,add a little more flour if the dough gets too dry.
Finally Sprinkle with flour-
Cover with a teatowel and set aside in a warm place to allow the dough to rise.
Meanwhile prepare the seasoning for the fish.
In a pestle and mortar place the3 cloves of garlic chopped,flor de sal, pepper, podered bay leaf,chopped parsley, and a tablespoon of olive oil.Pound everything until it becomes a paste.
Finally mix in the lime juice and mix well.
Stuff the fish belly with half the past
Spread the skin of the fish with the remaining paste and saeson it on both sides with a little more salt and pepper
Leave it to marinade until the dough is ready.
When the dough has risen, sprinkle your surface with a dusting of flour.Place the dough on the surface and roll it out,sprinkling the dough with alittle more flour from time to time so it doesn´t stick.
Place the fish in the centre of the dough and wrap it up making sure it is fully sealed and there are no holes
Place the fish on a baking tray previously dusted with flour
Coloque o peixe num tabuleiro de ir ao forno previamente polvilhado com farinha.
Put it in an oven preheated to 180ºC and leave it to bake for 45 minutes.
While the fish cooks, in a pan gently heat the olive oil and add the crushed and a scattering of oregano leaves
Stir and let it heat through being careful not to let it burn.
When the oil is flavoured, remove it from the heat.
After 45 minutes when the crust is cooked remove the fish from the oven,transfer it to aseving plate and brush it with some warm olive oil.
Serve it with the bread cut open (as above)accompanied by the sauce and some fried or Portuguese punched potatoes.Bom apetite!!